TopBetta first appeared in 2013 and was initially under the supervision of the Norfolk Island Gaming Authority. The agency received a Northern Territory Bookmaker’s License in August of 2016.

TopBetta bought MadBookie in 2017 in the month of April. TopBetta was in turn acquired a year later by PlayUp Limited. That sort of thing gives strong evidence to the fluid nature of Australian online bookmaking.

They offer a unique wrinkle in that along with the typical offerings of sports and racing. They run tournaments where punters play with fantasy money in the chase for the best results in order to claim a share of a prize pool of actual money.

Buy in costs for the various tournaments ranged from $1 to $110. The prize pools were $50 on the low end and $5,000 on the top end. None of the racing tournaments had any participants. An EPL tournament that cost one dollar to enter had the most players, 105, trying for a prize pool of the odd figure of $207.90.

If we were bookies, we would have either dropped it to an even $200 or rounded it up to $208, but that is TopBetta’s business, not ours.

The tournaments page was laid out nicely and in addition to the figures above, the time remaining to participate was indicated. In some instances, there was as little as two hours to join, while some of the others had several months remaining on the clock.

It took a bit of digging, but we eventually located the different tournament types.

There are Winner Takes All for one. Another is Top three, where the top player will receive 60 percent of the pool, with 30 percent going to second and 10 percent for third.

Top five is similar to top three, with the progression going from 40 percent of the pool for first, 27 percent to second, 15 percent to third, 10 percent to fourth and eight percent to fifth.

Multiple Placing Tournaments get a little complicated, but TopBetta has it laid out quite nicely on their website under a link titled Prize Payouts on the bottom of most pages under the heading of Useful Information.

Some of the Multiple Placing Tournaments will guarantee that the top participant will collect at least 50 percent of the pool, but that could increase for a tournament with fewer than 22 players.

There is one more category where the top prize is a minimum of 25 percent. 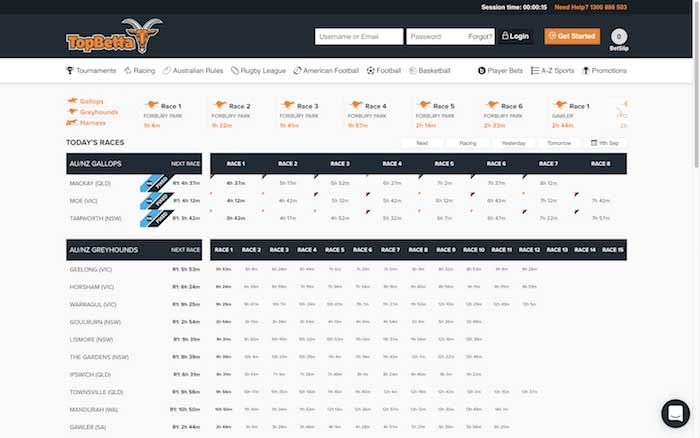 The TopBetta website is far from the prettiest we have seen, but we could express no qualms about its functionality. Join TopBetta Today

A feature we have not seen before was live video streaming in a small pane in the bottom right corner of the screen. The feature is known as TopBetta TV and the videos are available in high definition. During our visit, they were showing greyhound racing. We do know for a fact what other codes might be streamed live.

We left the Tournaments page to have a look at the gallops and decided it was a good time to hide the live stream and we were able to do so easily by clicking on Hide Pop-out.

It did seem to us as though the pages took a little longer to load than those of some of the other bookies, but our computer or internet connection, or something else along the way might have been responsible. The delay was not excessive by any means.

The racing pages were completely serviceable, if a little dull from all of the black, white and grey TopBetta uses, but the brain scientists would tell you that subtle colours reduce impulsive betting, so maybe the subdued colour scheme is a good thing. We had no trouble finding the markets, with the time remaining until the jump of a race clearly shown.

We calculated that this was an ideal opportunity to do our random odds comparison, so we selected the Group 1 Tab Classic Sangster Stakes that is going off at Morphettville in a couple days’ time.

Likewise for the lines and the number of markets.

TopBetta was quoting $4.60 Fixed Win on Spright. Ladbrokes had the identical price, but Neds was pricing Spright at $5.

TopBetta was also taking Lay bets for the race.

We next jumped over to Australian Rules just ahead of Round 7 to have a look at what we considered the most interesting game of the fixture, which was Collingwood and Port.

Permit us to digress briefly and mention that we found the TopBetta feature of a line of Sherrins across the top of the page providing quick access to the various popular futures markets, such as premiership, Brownlow Medal, Rising Star and Coleman Medal. That was a nice find and credit to TopBetta for having it.

We will leave you to form your own conclusions, but for years, we have been seeing such small differences between the bookmakers that we doubt we would use odds as a criterion in ruling out one and taking a membership with another.

With regard to odds and markets, TopBetta is right in the mix, as we expected they would be. 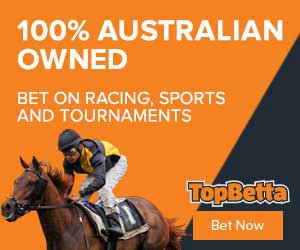 There are apps for Apple and Android devices and the mobile version of the website, which would be our choice, adapted well to the small screen on our phone and the larger one on our tablet.

Here again, survival dictates that smooth functioning mobile access is not an option, but a necessity.

As is the case with all the online bookies, TopBetta provides some promotions that change frequently.

That is, provided you reside in an area where promotions are permissible. Join TopBetta Today

TopBetta’s margin on average is 5.2 percent, which is in line with industry standards.

It requires $10 to establish a membership and TopBetta accepts bets for as little as $0.01.

They accept only Australian dollars and provided support in English only.

We noticed that TopBetta has restrictive win limits compared to some of the others, but that is not a problem for most punters. The limits vary according to code, but the maximum daily win limit is $20,000.

Clients can contact the agency via phone, chat and email and support can be obtained 24/7.

TopBetta is an Australian agency.

The ability to wager for amounts as low as one cent will certainly enable learners to become familiar with online betting both from the standpoint of minimal risk and from the perspective of learning to place bets that cover a wide range of outcomes. This would be ideal for those who want to try their luck with some of the more exotic bet types, such as trifectas for racing or quarter and first goal scorer markets for sporting events.

The tournament betting feature is by far the best reason to have a membership with TopBetta, as it is possible to make some losing punts but still win, so long as other players in the tournaments have poorer results.

Not much really. Only one bet at a time can be added to the bet slip, there are fewer sports and markets than some of the other bookies offer.

We have often mentioned that the internet and wagering seem to form an ideal arrangement.

Add in the social media aspect of tournament betting and the level of engagement is taken up a notch.

TopBetta, being Australian owned and operated and licensed should allay the concerns of those wary of online schemes and scams.

They offer competitive odds and in our opinion, a more than adequate number of markets, which would make them suitable for most newcomers and the low minimum wager is definitely going to reduce the anxiety of wagering on events with an uncertain outcome. Join TopBetta Today