Tom Clayton was an Australian Jockey who was born in 1880 and died on 24th March 1909. He was born in Sydney harbour side suburb on the North shore NSW. Indentured to the most famous trainer in Randwick, Isaac Farnshaw, the Australian Jockey of the early 1900s rode the best horses for him. He was popular for associating with the champion Poseidon and had an impressive record of major wins with the horse. 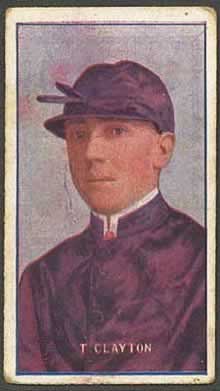 The champion horse went ahead to win the Caulfield Cup for a second time in 1907 and this helped Clayton to become the first jockey to win consecutive Caulfield cups.

Another major win by Crayton was in 1908 futurity Stakes on Antonio. At the age of 28, Tom Clayton sustained a compound pelvis fracture, internal injuries and broken ribs when his horse was among the 12 mounts that fell on 20 March 1909 during the Trial Stakes at RosehiIl. The injuries resulted in his death on the 24TH of March 1909.

A public auction was held on the 24th of March 2004 where the presentation whips given to Thomas Clayton for his wins in the Melbourne Cup wins held on Poseidon and Acrasia were sold at a public auction held in Victoria. The Acrasia whip fetched up to $750 while the Poseidon whip cost $3,750.

After the death of Tom, the whips had been passed in succession from his wife to his daughter and finally to his grandson.

The Winning Jockey’s Presentation Whips that were presented to Clayton for winning Acrasia to victory in the Melbourne Cup held in 1904 had some metal top created in the shape of a horse’s head and engraved with the words, “G. & J. Zair, Makers’’.

It was 95 cm long and had some wear with some part of the covering missing some 17-23 cm from its base. The idea of giving the winner of the Melbourne Cup a gold mounted whip was first conceived by Mr. P.H Reynolds in the year 1888. On his death, Wirth Circus took over the presentation. When he died in race fall at Rose Hill, Tom Crayton was aged 28.

His whip had been passed in succession from the wife to his daughter and finally to his grandson, Clayton Bloomell named after his grandfather.

The Winning Jockey’s Presentation Whip that were given to Clayton for winning the Melbourne Cup in 1906 while riding Poseidon to victory had a gold top that was engraved ‘From Wirth Bros/To/T. Clayton/Winning Jockey/Melbourne Cup/06’’.

The horse Poseidon broke the record by winning the Caulfield Cup, the AJC Derby, and Melbourne Cup & Victoria Cup in a single season.

As a respected and well-known jockey, the death of Thomas Clayton after a fall came as a shock to many who knew him.

At the time of his death, he was riding All Blue at the Rosehill Racecourse. According to the SMH, Clayton explained to his father on his hospital bed how he was third in the Trial Stakes and his horse was going strong while the horse that was in front of him hung out. His horse galloped on his heels, bringing him down.

The SMH continued that unlike others in his calling, Clayton was a thrifty and clean-living fellow.

On the other hand, the Bulletin reported that the greatest success of the jockey started from ‘… his appropriation of the Melbourne Cup on Acrasia in 1904. He went ahead and won the Melbourne Cup, 2 years later while riding Poseidon. Another newspaper that reminisced on his winning rides was the Daily Telegraph.

Nothing indicated the respect that was accorded to the jockey then the high number of people who were present at the funeral of the well-known jockey, Thomas Clayton. The SMH reported. The chief mourners were the brothers and father of the deceased horseman. At the graveside, there were all jockeys and metropolitan trainers as well as other persons, prominently connected to the jockey.

His headstone has his story as it is written, “Died from injuries accidentally received at Rosehill Racecourse.’’ He was buried at the Waverley Cemetery Bronte New South Wales, Australia.