Think Big: One of the more intriguing aspects of sports is the vast entertainment value provided by comparing past champions to present ones, or ranking them by their accomplishments.

Sports fans can engage in the debate of what constitutes true greatness, or they can speculate on almost limitless “What If” scenarios. Certain questions arise naturally. 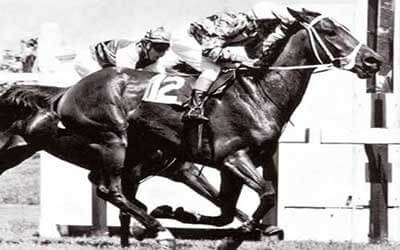 Regardless of the time period, however, there are a couple of constants. There is the great champion whose accomplishments are somewhat diminished for never having won on the greatest stage and conversely, there is the competitor that made a big splash in the defining event of their sport, but was relatively unaccomplished otherwise.

It is a thoroughbred racehorse with relatively little to show for a career spanning age two to age six, during which he (bit of a clue for you there) jumped fewer times than the total of Black Caviar’s wins. He won only nine races over 21 starts.

Mixed in with those nine wins were nine placings and three fourths. All in all, fairly respectable results, but nothing exceedingly spectacular. He at this point is not considered significant to the extent that he would qualify for the Australian Racing Hall of Fame.

Yet, he did manage something that places him in a select group out of the thousands of thoroughbreds that have competed over the course of racing history, something that has only been bested once. He was the last, prior to Makybe Diva’s three, to win the ultimate testimony to racing greatness twice: the Melbourne Cup.

Many of you will have figured out our subject by this time. For those who have not, we will end the lead-up and reveal that we are discussing the 1974 and 1975 Melbourne Cup winner: Think Big.

Like many of the great stayers, Think Big hails from New Zealand. He was foaled in 1970 by Sobig out of the mare Sarcelle. As far as ancestors with above average racing credentials, it is necessary to go back four generations to find Great Britain’s Hyperion, and one more to discover Hyperion’s sire, Gainsborough.

Think Big made three starts as a two-year-old. His lone victory at that age was over 1350 metres in the Lindsay Park Stud.

His three-year-old campaign would have to be declared his best in terms of jumps, strike rate and victories, with three wins, all at 1600 metres. He also won the Miner’s Cup at Ballarat, where he stepped up to 2200 metres.

A couple of months later, he won the Churchill Stakes at Eagle farm, another 2200 metre event. He also had two respectable thirds at Eagle Farm, including the 3200 metre Brisbane Cup, so he had established himself as a distance horse. It certainly did not hurt his efforts to have Bart Cummings as his trainer.

He also had, at various times, Harry White and Peter Cook steering, so he was always in good hands from that aspect.

At four, Think Big only came out of the stable on five occasions, racing beneath Peter Cook once and Harry White four times, once at Rosehill, twice at Flemington and twice at Ascot.

It was those Flemington races that set him apart, including of course, the Melbourne Cup win where he defeated his stablemate Leilani, the favourite leading into the race, and gave his backers at 12-1 payday.

The track conditions were reported as good. Think Big was given 52 kg for the event. His winning time of 3:23.2 was square in the middle of the pack for the history of the race. Herminia, Turfcutter and Battle Heights all went off with lower odds than Think Big.

The following year, as a five-year-old, Think Big only raced twice, producing a third place finish in the Caulfield Stakes with Roy Higgins aboard. Even as last year’s winner, however, when he went into the Melbourne Cup in 1975, he was not given much consideration, and made the jump at 33-1.

Those odds were no doubt influenced by a dismal next-to-last showing in his final lead up, the Mackinnon Stakes. Harry White got the ride over Peter Cook. The pair produced one of the slower winning times in the Melbourne Cup’s history, crossing the line at 3:29.6 ahead of Holiday Wagon. For those who enjoy a long-shot, third place finisher Medici went off at 125-1. Quite a few in that field went off at lower odds than Think Big, but only Fury’s Order was bearing more weight than Think Big.

As a six-year-old, Think Big appeared in only three races, producing two seconds and one fourth place. He ran for the last time on 7 May 1977 in the West End Stakes at Morphettville.

Since Think Big was gelded, he did not stand stud. He did have a nice, long life living on the farm of jockey Harry White, who, it would have to be said, owed the big bay at least that much. It would be nice to think Bart Cummings contributed a bag of oats or a bale of hay occasionally, as well.

He is a clear example of that champion that took the top prize in the ultimate event, but otherwise did little of consequence. What he did do was win the Melbourne cup twice consecutively, a feat to which not even Phar Lap could lay claim. Aside from three-time winner Makybe Diva, only Rain Lover, Peter Pan and Archer are in the group of multiple Melbourne Cup winners.

Think Big and Archer are the two-time winners that have, at least to this point, been excluded from the Australian Racing Hall of Fame.

So, racing fans, does Think Big deserve inclusion in the Hall for being in such a small group, or does a consistent overall record trump the big wins? That debate is one for which both sides can make strong arguments, just as this same debate could be applied to any sport.