The Barb: The passage of time often imparts abilities and exploits to a competitor that grow over the course of years. This natural inflationary tendency is frequently the result of the attempt to make the past more interesting from a historical perspective.

Anyone who has ever wet a line would agree that with each passing year, a significant catch grows increasingly larger and the battle to secure that catch more epic in nature. 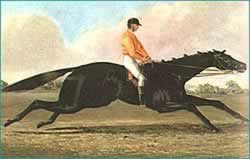 Such is often the case when thoroughbred racehorses are involved. It is almost a certainty that in a hundred years from now, the tales revolving around Makybe Diva and Black Caviar will place those two substantial champions in the realm of mythology, which in their case is truly justified, just as the efforts of the Beatles might one day be mentioned in the same breath with those of Mozart or Beethoven.

There are more than a few instances, however, where the growth of a legend is justified by historical facts, and such would seem to be the case for the horse we propose to discuss today, The Barb.

He is one of the few that have made it into the Australian Racing Hall of Fame with few dissenting voices to question his inclusion and his place near the beginning of racing in Australia does nothing to diminish his achievements.

He was foaled in the vicinity of Leehole, New South Wales in 1863. That year would have seen just the third running of the Melbourne Cup, with Banker taking the post in the year succeeding Archer’s win in the inaugural and second editions of The Race That Stops A Nation.

The Barb’s sire was Sir Hercules, a productive stud and his dame was Fair Ellen. Of course, these two came from Great Britain, as did most of the Barb’s bloodline.

No one is certain that his name was a derivation based on 8th century Arab cavalry horses that were bred and trained for fighting, but The Barb was certainly a horse that seemed to have an affinity for competing, and was often described as being somewhat difficult to manage, enough so to earn the nickname Black Demon.

Some accounts maintain that the temperamental nature of the horse was the result of being mistreated by abductors as a foal, and whilst these accounts do not necessarily possess the veracity of indisputable eye witness testimony, it is documented that on the first attempt to race him, he tossed his jockey and bolted.

The Barb Has Many Victories

As was often the case in those early days of racing, The Barb’s owner and trainer were one and the same, a man named John Tait. He is credited with devising a strategy for turning The Barb’s natural aggressiveness and spirit so as to make him run in an oval productively. In fact, out of 23 starts, The Barb produced 16 victories, at least as far as can be ascertained due to the less than encyclopedic record keeping of those times. There certainly could have been more starts and/or wins, as it was often common in those times to race a horse far more vigorously than takes place in modern times.

The horse was successfully recovered from his abductors and sold Tait for the tidy sum of 200 guineas to Tait, a man who is sometimes given the glory for turning horse racing from a merely aristocratic hobby into a business. He managed quite well, it would seem, as he supplied four Melbourne Cup winners, beginning with The Barb in 1866, followed by Glencoe in 1868, and concluding with successive victories in 1871 and 1872, courtesy of The Pearl and The Quack, respectively.

Tait served the role of owner and trainer on all four occasions, a role not uncommon in those days, and one shared by an equally famous owner/ trainer, Etienne de Mestre.

Tongue firmly in cheek, it would be enlightening to travel back in time and ask John Tait why Glencoe was not named The Glencoe.

The first official start for The Barb took place in the All Aged Stakes, where a result of second was recorded.

The beginning of The Barb’s career was not exactly stellar. As a two-year-old, the horse was raced on three occasions, with the above mentioned bolting incident coupled with a third place and a win in the Nursery Stakes.

He came into his own, however, as a three-year-old after a spell that seemed to slightly calm the horse. He won the prestigious AJC Derby and jumped as the favourite and won the Melbourne Cup. The Barb would also win the Australasian Champions Stakes, despite an apparent reversion to his old flightiness that cost him the victory in the All Aged Stakes.

He won again when he was tried as a four-year-old in Tasmania, winning that island’s most prestigious event, the Launceston Plate, along with the Port Phillip Stakes preceding a return to the mainland for a Sydney Cup victory.

The Barb’s five-year-old campaign was to prove the most productive. He won all seven of the events he contested, including a second consecutive Sydney Cup.

So formidable was he considered that the stewards of the Melbourne Cup assigned him 73 kg, a staggering amount that accomplished nothing other than to persuade John Tait that it was time for The Barb to retire to stud. He was sold to Charles Reynolds, and as is not unfrequently the case with champion thoroughbreds, The Barb did not produce any heirs that were his equal on the turf. Some of his progeny did prove worthwhile brood mares.

Over the course of his career, he did compete against worthy horses, including Tim Whiffler and Fishhook, along with a few other notables, enough that the Hall of Fame criterion of having competed against upper echelon horses was satisfied. His induction took place in 2004, the third year subsequent to the establishment of the Hall.

He joined alongside Ajax, Better Loosen Up, Gloaming, and Poseidon, so with no recommendation other than being associated with those greats, it would seem that he rightfully occupies a place of respect and admiration from any fan of racing history and anyone associated with the sport of racing.