Surround Thoroughbred: To this point, our examination into the thoroughbreds that were awarded entrance into the Australian Racing Hall of Fame in 2014 has covered the careers of Lonhro and Rain Lover. This instalment will take a look at a filly foaled in 1973 named Surround.

Hailing from New Zealand, this grey speedster ran unplaced only seven times over the course of a career that included being tried 28 times. She produced 17 wins and four placings. Her career was concluded by the time the current race quality classification system made its 1980 debut, but six of her victories came in races that have since been deemed as Group 1 events. Four others are considered now, or were at least at some time or another, Group 2 in quality. All of those came in 1976 and 1977. 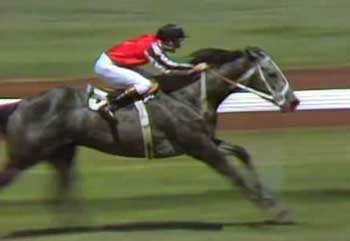 Her racing achievements resulted in her being named Champion Australian three-year-old in 1976. During that season, she won 12 times out of 16 starts, including winning the race that some considered knowledgeable in the racing realm consider the ultimate test of ability, the Cox Plate, in so doing becoming the only filly ever to take the Plate prior to mares Dane Ripper in 1997, Sunline in 1999 and 2000, and of course, Makybe Diva in 2005.

Further back, two mares, Tranquil Star was the winner twice, in 1942 and 1944, and Flight duplicated those two wins with an intervening year in, or more accurately, another edition occurring betwixt victories, in 1945 and 1946.

Pinker Pinker in 2011 rounds out the list of ladies that can claim the Plate, although all of these had achieved the status of mare by the time they won.

As a four-year-old, Surround injured a foreleg, and then underwent rehabilitation for that injury, but could only compete three more times before the injury resurfaced and the decision was made to retire her. Her popularity was such that she received the honour of Australian Racehorse of the Year in 1977.

This does not seem like much when the purses of today are considered, but at the time, those winnings represented an Australian record for a mare up until that time.

Surround represented that uncommon thoroughbred type that was capable at distances ranging from sprints, through the middle distances and up to the 2040 metres required to win the Cox Plate, as well as the 2400 metre Queensland Oaks and the 2500 metre VRC Oaks.

Bred in New Zealand, Surround was foaled in 1973.

Surround’s sire was, like she herself was, a grey horse. He was of Irish origin by the name of Sovereign Edition with unexceptional racing credentials. It was as a sire that he made his mark, accounting for 36 stakes winners in Australia and New Zealand, with Surround being his most productive progeny.

Surround’s dam was Micheline of New Zealand, also responsible for producing offspring that would win multiple blacktype events. Micheline’s sire was Le Filou of France, perhaps best known for serving as the sire for Big Philou.

For anyone who appreciates such things, a look back five generations finds ties on the sire’s side to Gainsborough, the horse that also can be seen on the dam’s side of Big Philou’s lineage.

Surround had as her trainer Geoff Murphy.

In winning 12 times as a three-year-old, she won the following races in 1976 that would receive Group 1 quality classification when that system emerged: Moonee Valley Race Club W.S. Cox Plate, VATC Caulfield Guineas, and the VRC Oaks. Group 2 victories in 1976 were the VRS Ascot Vale Stakes and the Moonee Valley Stakes.

In 1977, Surround took the AJC Oaks, the Queensland Oaks, and the C.F. Orr Stakes at the Group 1 level. Her Group 2 wins in that year were the Blamey Stakes and the MVRC Alister Clark Stakes. She had two significant second place finishes in Group 1 events also, the Futurity Stakes and the John F. Feehan Stakes.

It is debatable how much longer Surround would have competed had she remained healthy. Twenty-eight starts are not insignificant by any standard, in any era. Would it have been possible for her to be winning as a seven year old, as was Makybe Diva when she won the Cox Plate? Surround’s ability to perform at shorter distances might lend support to the argument in favour of that position.

The reality is that she experienced the fate of many an exceptional racer of being compelled to retire before that question could be answered.

Not long subsequent to her leaving the turf, the ATC dedicated a race to her name, the Surround Stakes, held at Sydney’s Warwick Farm racecourse in March. Initially run as a Group 3 race, it was elevated to Group 2 status in 1986.

Surround still enjoys the singular distinction of being the only filly to ever win the Cox Plate, where weight-for-age conditions do make it possible for less experienced runners to go against more well-established competitors, without the spectre of previous performance dictating handicaps that could prove insurmountable to the younger set.

As far as satisfying the Hall of Fame criteria of excelling at the highest level and exerting an exceptional influence on Australian racing, Surround exceeded these to a degree that only makes one wonder why so many years intervened betwixt her career and her induction.