With just a few dollars betwixt him and $29 million in PGA prize money, Stuart Appleby has represented Australia quite adequately, even though he has failed to crack the winners circle at any of the four Majors.

He has weathered the inexplicable slumps that can vex golfers at all levels and he has dealt with personal tragedy along the way, so his story is one that deserves telling. 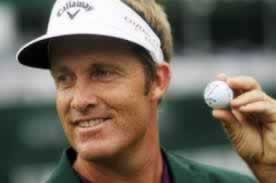 He is one in a long line of Australian golfers who has brought credit to his homeland, following in the footsteps of countrymen Greg Norman and Craig Parry, and serving as something of a de facto mentor for the new crop, such as Masters winner Adam Scott, rising star Jason Day, and Aaron Baddley.

At the age of 44, it would seem as though he is poised to make a return to the major championships from which he has been absent since his 2011 appearance at Augusta. His 2014 finish left him tantalisingly close to automatic entry into the 2015 Masters, U.S. Open and British Open.

Appleby finished ranked 31st, one spot shy of the top 30. No one who watched the final round of the 2014 FedEx Cup BMW Championship in Denver could help but cheer on the affable Australian as he battled the course and the tense situation that would have been generated by the stakes involved.

Any golfer is well acquainted with the aftermath of such an occurrence, the inevitable backwards glance at the well-struck long iron that landed inches from perfection and instead of providing an opportunity to move up instead led to the drop of a stroke, or the perfectly read and struck putt that was half a revolution shy of going in.

A player of Appleby’s calibre might recall a perfectly executed tee shot on the fourth hole of the first day of competition that was blown into the first cut by a puff of wind that arose whilst the ball was in the air.>

Despite that bit of bad fortune in 2014, Stuart Appleby seems to be ascendant once again, so a brief chronological examination of his life and career is warranted.

Appleby was born 1 May 1971 in Cohuna, Victoria, town of some 2,000 residents about 275 clicks north of Melbourne. Given the usual aristocratic perceptions of golf, it is interesting to learn that he grew up on a dairy farm where he had chores to with which to contend before he could spend a little time smacking golf balls about the pastures. He played Rules as a young boy, and with his eventual stature and weight, it is entirely conceivable that he could have opted to pursue athletic glory on the oval.

He got his start at professional golf in 1992, following the path of many Australian golfers by joining the PGA Tour of Australasia. He dominated that tour, taking Order of Merit honours in his inaugural year and again in 1994, despite only securing three victories. It was a bit of a harbinger for his entire career, where reliable consistency mixed in with more than a few flashes of brilliance would find him often on the first page of tournament leaderboards.

Confidence and credentials established, he took the next step in 1995 by winning his first start on the Nike Tour, currently the Web.com Tour, and winning again, eventually finishing fifth of the money list and gaining admittance to the top echelon PGA Tour. He required 22 starts on the junior circuit to amass winnings of $144,419.

He competed 30 times in his 1996 debut on the main tour, earning an additional $20,000, making 18 cuts, and again displaying the remarkable consistency that is all the more impressive considering the fierceness of the competition where the difference betwixt success and failure is measured in fractions of a stroke.

He won the Honda Classic in mid-March with a one stroke victory over his friend Payne Stewart and Michael Bradley. Consistency was apparent in 18 cuts made out of 23 appearances and he took home just over $1 million U.S. for that season.

The next two seasons supplied wins, also, those being the Kemper Open and the Shell Houston Open. All three of his victories to this point were typical in all of his wins in that he won by one stroke, proving that nothing was ever given to him. Two of his other wins were in playoffs and three others by the now familiar one stroke margin. In fact, the only time Appleby enjoyed the luxury of strolling down the 18th fairway savouring an insurmountable lead was his second victory of the Shell Houston Open in 2006. This was the case, even though in four of those wins he was at least 21 shots better than par.

Stuart has a major claim to fame for winning the Mercedes Championships three consecutive years, 2004 to 2006. The first two found him better than 20 strokes below par, but conditions were such for the third win that -8 in regulation that was enough to secure a playoff victory over Vijay Singh, who would return to win the Mercedes in 2007. There obviously is something to the Horses for Courses adage.

His final win to date on the PGA Tour was the 2010 Greenbrier Classic, where he had to post a -22/258 total to eke out a one stroke win over Jeff Overton. The remarkable aggregate included three rounds in the 60s and a mind boggling 59 in the final round, a feat that has occurred in an official PGA tournament only five times.

Tragedy entered into the life of Stuart Appleby in 1998, when his first wife was killed in an automobile accident in London after Appleby had failed to make the cut in the 1998 Open Championship. The following year, his friend and neighbour Payne Stewart was killed in a mysterious plane crash where an apparent drop in cabin pressure caused the private jet in which he was flying to eventually run out of fuel and crash whilst being escorted by U.S. military fighter aircraft.

He remarried in 2002 to Ashley Saleet and their four children in Orlando, Florida. In honour of his friend Stewart, he serves as a father figure to Stewart’s children.

He is also involved with a junior golfers foundation that he established to introduce youngsters in Victoria to the benefits of the game of golf.

No one could wish for anything other than Stuart Appleby to continue to flourish and persevere as he has, both on the course and off, and that he continues to represent the game of golf and the human species in the admirable fashion that he has thus far.