Sally Pearson : Of all the different individual athletic pursuits, running probably most embodies the concept of natural ability being paramount.

With the exception of relay events, there are no teammates to prop up a runner who is having an off day. No amount of dedication, perseverance and desire will compensate for pure raw speed in the case of sprinters or exceptional stamina for distance runners. 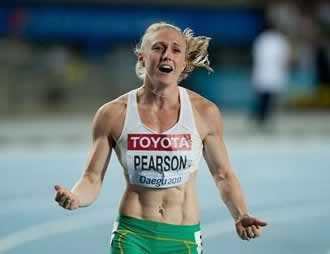 Talent must come first, and then those other elements must be incorporated, because the days of getting by on natural ability alone are seemingly forever gone.

This reality is even truer for the sprinter. Training methods and coaching offers only minimal amounts of assistance. No coach, nor any training regimen in the world, will make an adequate sprinter into an elite one.

That will be our segue into an examination of one of Australia’s elite sprinters, Sally Pearson (née McLellan).

Sally Pearson was born 19 September 1986 in Sydney. She stands 166 cm. tall and weighs in at 60 kg. She currently resides at Gold Coast and is married to Kiernan Pearson. The couple celebrated their third anniversary this past April (2013) after a long romance dating back to when the two were high school sweethearts at Helensvale State High School in Gold Coast.

Sally Pearson relocated to Gold Coast when she was eight years old. Her first and long-time coach, Sharon Hannon, saw her potential very early on. Pearson was competing and winning at a high level by the time she was 14, winning the 100 metre title in the under-20 division by being the fastest sprinter in the nation in 2001.

Pearson had to cope with injuries the following year. It was not until 2003 that she was sufficiently recovered and in form adequate to compete at the international level, serving notice to the world at the World Youth Championships in Canada that she was on the ascendant Track horizon. Sally Pearson won a gold medal in the 100 metres at that meet.

Just a month later, she was in Paris at the World Championships as part of the 4 x 100 metre relay team, where the Australian unfortunately finished last in their heat and did not make the final.

The following year saw her taking part in the 100 m hurdles, as well at the 100 m sprint at the World Juniors, where she took bronze medal honours in the sprint and barely missed medaling in the hurdles.

A stumble and fall in the final of the 100 m hurdles cost Sally Pearson any chance of a medal in the 2006 Commonwealth Games where Pearson had the advantage, albeit the pressure to perform, of competing in Melbourne.

A degree of frustration was to be her experience at the 2007 World Championships in Osaka, Japan. She was still running the two events, possibly to her detriment, as the demands of switching betwixt the sprint and the hurdles is deceptively complicated, and she could do no better than the semi-final of each event.

As part of her preparation for the 2008 Shanghai Olympic Games, Pearson made what would turn out to be both a prescient and wise decision by turning her focus strictly to the hurdles. She advanced through her preliminary heats to the final, where she took the silver medal when favourite Lolo Jones had a miscue and the ensuing photo finish put Pearson on the winner’s podium.

Sally Pearson performed admirably in Europe during the 2009 season, winning five times from seven starts and establishing an Australian/Oceanian record in July whilst running in Monaco. Back spasms were to prove a severe hindrance to her in the Worlds that year, causing her to slip to fifth in the hurdles.

She was to recoup that disappointment at the Worlds the following year by returning to run the fourth fastest time in history, a 12.28 that gave her the World Championship gold medal.

When the tally had been taken in the 2012 lead-up to the London Olympics, Sally Pearson inhabited near-Black Caviar-like territory, having won 32 races from 34 attempts. In hurdles, where the slightest slip or break in stride can prove fatal, that is a level of consistency of which it is barely possible to conceive.

She led after the first round of heats and ran a 12.39 in the semis. She would post a fresh Olympic record time of 12.35 that left Americans Dawn Harper and Kellie Wells, both of whom, despite running new personal bests, saw the back of Pearson when the finish line was achieved.

It would seem in retrospect that the decision to focus on the hurdles paid off nicely indeed.

Sally Pearson has also showed nicely at indoor events, one being gold at the 2012 WIAC in Turkey. She has had limited success in relays, but to her everlasting credit there never has been much posturing or finger pointing over this on her part.

Performance of this sort obviously attracts accolades, and the most significant in hers and all eyes would certainly be the International Association of Athletics Federations (IAAF) Female Athlete of the Year Award she was honoured with in 2011.

At her current age of 27, Sally Pearson will be 30 when the next Olympics come along which is a bit long in the tooth for any runner, most especially a sprinter, but it would seem she has her eye on the Games of Rio de Janeiro, along with other top level international competitions that will serve nicely in the lead-up.

She only just very recently has jettisoned long time coach Sharon Hannon in favour of Antony Drinkwater-Newman, not seemingly so much out of disregard for Hannon, but in order to potentially benefit from some fresh ideas.

Sally Pearson is obviously reaching the end of her career, as track is one of the cruelest sports in terms of longevity, but it is also true that the experience from running in many races and the additional muscular strength it is possible to develop for the mature athlete is actually a benefit for a hurdler, much more so than it would be for a pure sprinter.