Thoroughbred horse racing, for the moment, at least until some behemoth omnipresent technology company succeeds in developing autonomous horses after the same fashion it has applied to autos, requires a team effort involving a rider and a horse.

It will always be difficult to fairly divide the credit for winning. There are some cases where it was obviously the horse, with impressive results regardless of who was steering, others where it seems that a jockey coaxed supreme efforts from a less-than-optimal galloper, and some where it seemed as though a jockey could win with the kitchen broom as a mount. 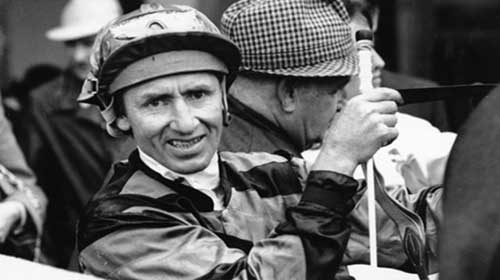 It would probably be fair to say that in the case of Roy Henry “The Professor” Higgins (5June 1938 – 8 March 2014), any and all, and perhaps others to boot, scenarios would be applicable to describe a jockey who dominated big races at tracks all over the country for an extended number of years.

Higgins is credited with winning over 2300 races. Of that total, 109 are considered as Group 1 quality, although prior to 1979 or thereabouts, the Australian Pattern Committee, providing guidance to the Australian Racing Board, would have simply called what are now considered Group quality races as principal races.

Roy Higgins was born in Koondrook, Victoria. He began his apprenticeship with trainer Jim Watters in New South Wales.

His first ride was allegedly aboard a horse named Cherry Girl in 1953 at Denliquin, a city in the Riverina region of New South Wales not too far from the border with Victoria.

Being the conscientious types that we consider ourselves, dedicated to the attempt to always provide the most factual information available, we must disclose that our research into Cherry Girl reveals a New Zealand horse foaled in 1955, so it is clearly not possible that Higgins rode her in 1953.

There are seven other horses with that name in the thoroughbred database, but the only other one from the Australasia region was another New Zealander, this one foaled in 1922. We did ascertain that Denliquin is a real place, if that supplies any reassurance, and accounts deemed reliable say that Higgins got his start there and that in his first race, he and whatever horse he was aboard finished dead last.

That poor showing did not discourage Roy Higgins. He was in the winners’ circle two months later aboard Statutory. Once again, we are compelled to disclose that if it was indeed Statutory that Higgins rode in his first win as a jockey, none of the horses of that name in the thoroughbred database date before 1984, which only serves to point out the difficulty of obtaining reliable information before the computer came along and made it possible to record and recall even the most arcane bits of information on any subject.

What is certain about this early period of Higgins’s career is that he was the top apprentice from the region in which he started and rode in close to 300 races.

He made his way to Melbourne to seek his fortune at Flemington where he won two races on his first appearance. He displayed a cerebral style of tactics designed to get the most possible from his mount at the best time, leading one of the racing journos to bestow Higgins with the moniker of “The Professor.”

If 1953 is accurate for his start date, his retirement in 1983 means that he devoted 30 years to racing as a jockey. He had continuous struggles with his weight, often going without food and spending extended periods of time in saunas in order to make the weight for his rides. Relatives of his confirm that even as a 15-year-old apprentice, he was always wasting.

Without the demands of constantly trying to stay light, he probably would have been comfortable around 63 kilograms. Not surprisingly then, upon being interviewed after his final race, he declared his only future ambition was “to be a little fat man.”

His self discipline, however, could not be questioned in light of the indisputable facts regarding his racing career. Only a handful of jockeys throughout the history of Australian thoroughbred racing have won the Melbourne Cup, the Golden Slipper, the W.S. Cox Plate and the Caulfield Cup. Higgins had won them all by the time he was 31 years old.

He won the Melbourne Cup twice as a rider for Bart Cummings. The first was in 1965, courtesy of Light Fingers and the second aboard Red Handed in 1967. His Golden Slipper wins were in 1966 and 1973. It was Storm Queen the first time and Tontonan the second. In the Cox Plate, it was Sir Dane in 1964 and 2005 Hall of Fame inductee Gunsynd in 1972. Higgins’s lone Caulfield Cup victory came in 1969.

It was a controversial victory awarded to him and Big Philou when a protest involving first-past-the-post Nausori resulted in Big Philou being moved from second to first. That controversy carried forward to that year’s Melbourne Cup when Big Philou had to be scratched less than an hour before the race after someone apparently ‘knobbed’ the horse in an apparent effort to prevent a Cups Double from emptying the bags of certain bookies.

Over the course of his remarkable career, Roy Higgins would lay claim to eleven Melbourne jockeys premierships, putting him in a tie with Bill Duncan for the title of Victoria’s most successful jockey. He worked with Bart Cummings and T.J. Smith for many wins in Australia, Africa, Asia and Europe.

He continued to be associated with racing after his riding career concluded. He served as an advisor regarding the selection of broodmares and he also was a popular racing commentator on the radio.

Perhaps the most telling testimonial to his riding prowess would have been the edge he provided to punters when seeing his name on the form, although that obviously would have led to his horses’ odds shortening on more than one occasion.

Roy Higgins died from a variety of causes after waging a short battle with his illnesses in the hospital in March of 2014.