Young men who eventually achieve greatness in any sports endeavour, frequently have to learn to control an impulse to be a hero in order to become great.

This was the case with the greatest Australian tennis player of all time, Rod Laver.

He had a reputation for attempting the impossible shot, displaying an adventurous side that put greater emphasis on the flashy and spectacular, going for shots that had a low percentage of being effective, but when successful, able to induce gasps from tennis spectators. When he turned professional, he learned that it was not who hit the most improbable shots who won; it was the person who won the last point. He also learned that the shortest path to winning the last point was to pick his spots carefully and force his opponent to beat him, rather than handing points away out of a love for phenomenal shots. 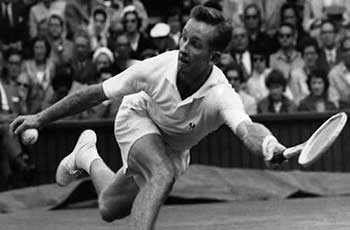 Remember, too, that in Rod Laver’s time, tennis players were expected to play singles, doubles, and mixed doubles, unlike many of the modern divas who are barely willing to share the court with an opponent, much less a partner.

Rodney George Laver, the third child of cattleman Roy Laver and Melba, was born on 9 August 1938. His place of birth was Rockhampton, Queensland, a city of the Fitzroy River 600 kilometres north of Brisbane. At the age of 27 he married a Yank named Mary Benson, who lived in California with her three children from her former marriage. She was Rod’s senior by approximately 10 years. The couple had a child together and lived at various times in different areas of California. Mary Laver died at age 84 in 2012.

When Rod Laver first appeared as an amateur when he abandoned school in 1956, tennis was not quite as lucrative as it has now become. As an amateur, he would have relied on endorsements and sponsorships. In fact, his career earnings of just over $1.5 million U.S. are approximately half of what the winner of the 2014 U.S. Open will take in.

Laver won both the Australian and U.S. Junior Championships his very next year, in 1957. Two short years later, he obtained not just one, but all three finals in tennis’ crown jewel, Wimbledon. He won the mixed doubles with his partner American Darlene Hard. She was beaten in her singles final by Mario Bueno of Brazil, but won the doubles title with fellow American Jeanne Arth. Laver and partner Bob Mark were defeated in doubles by Roy “Emo” Emerson and Neal Fraser in a match that was exclusively Australian. That match went four sets out of a possible five, but remember, this was the era before tiebreakers and Laver and his partner needed eight games to take the first, lost the third by the score of 14-16 and took nine games in the fourth to seal the win. Laver lost the singles title to American Alex Olmedo. In order to get to the final, Laver had to play an 87 game semifinal to defeat American Barry MacKay. The British hosts of the tournament were nowhere to be found as far as the finals were concerned.

Rocket Rod, as he had been dubbed by Australian Davis Cup captain Harry Hopman, won his first major singles title, the Australian Championships, in 1960, beating fellow Australian Neale Fraser against all odds in coming back from a two set deficit and saving a championship point in the fourth.

Rod Laver won the first of his four Wimbledon singles titles in 1961 and in 1962 became the first man since Don Budge in 1938 to win all four of tennis’ Grand Slam singles titles.

What may be even more remarkable is that he very nearly pulled off the same feat in doubles, failing only to win the U.S. Open, despite reaching the finals three times, the last being in 1973.

Rod Laver also has the further distinction of leading Australia to four consecutive Davis Cup victories from 1959-1962. He is the only player to ever win the Grand Slam twice, in 1962 and 1969. He also won 200 tournament titles in his career, the only man to ever do that. In addition, he is the only man to ever chalk up 7 consecutive seasons with 10 or more tournament titles, which almost pales in comparison to the 16 consecutive seasons in which he won five or more.

It is almost always tempting to try comparing players of different eras, and in the case of Laver, those comparisons would be those involving Pete Sampras, Bjorn Borg, Roger Federer and Novak Djokovic.

One factor that really stands out is that at 5’8”, Laver would be dwarfed by players of the modern era. Ken Rosewall, Roy Emerson and some of the other contemporaries laver went up against were all of similar stature.

For point of comparison, the writer of this piece had the privilege of seeing Laver play in an exhibition in 1973 that took place in a small town outside of Pittsburgh Pennsylvania. His opponent on that occasion was a 6’4” American named Butch Waltz, who for a short time, terrorised the professional circuit with a first serve that routinely clocked in around 130 mph. This was at a time when racquets were generally wood, and serves of over 100 mph. were rare.

Rod Laver in 1973 was well beyond his prime, but he routinely returned the bullets Waltz was serving for winners, taking the set 6-1. It was almost as though he were teeing off on the first serves of Rosewall.

It is therefore probably safe to say that Laver could hold his own against any of the current crop of players.

When it comes to greatest of all time, Laver deserves to be in the conversation. In a poll conducted by the magazine Inside Tennis in 1986, 37 experts ranked laver ahead of John McEnroe, Don Budge, Jack Kramer, Bjorn Borg, Pancho Gonzales, Bill Tilden, Jimmy Connors, Fred Perry and Lew Hoad. In a similar comparison made in Tennis Week in 2007, Laver again topped the list, with the exception that Roger Federer, Ivan Lendl and Pete Sampras had come along to be included on the list.

Whatever your opinion, there is no denying that Rod “Rocket” Laver was one of the best to ever play the game. His ability to be dominant over a long period of time, and on all surfaces, is more than ample proof of this assertion.