Robert Allenby: Golf at the professional level can often be a head scratching game. Driving, approach shots, rescue shots, putting and the other phases of the game can all be working well for a golfer, but in a 72 hole medal tournament, having all the facets operating at 100 percent is no guarantee that another player doing similarly well could shoot a lower score by one stroke and walk away with a victory.

The difference betwixt earning a substantial living and scrambling to make ends meet on one of the peripheral tours is razor sharp. As a player advances through the ranks in hopes of qualifying for the PGA tour, he faces increasingly stiff competition from players who can hit every shot, have the mental toughness to deal with the vagaries of the game, and possess that uncanny ability to make the crucial shot or putt when the tournament is on the line. 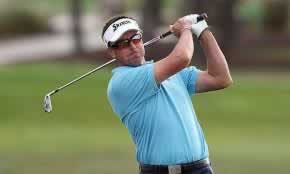 Amidst that highly pressurised backdrop, it can be tempting to dismiss a player whose results do not place him in the elite echelon, a player, for example, who has never won a Major tournament, or had a dominant, multi-win season that included many high finishes and a perch near the top of the money list.

It is easy to lose sight of the fact that merely qualifying for the PGA tour is an accomplishment achieved each year by only a few from amongst the thousands and thousands who have made the attempt. In a realm where the average PGA tournament is granting over a million U.S. dollars to the winner ($1.26 million AUD), the stakes can wreak psychological havoc on the mind and the golf swing, making professional golf not a game for the weak in spirit.

Melbourne has produced a golfer who would seem to embody the ranks of those who have flirted with greatness only to have circumstances conspire to prevent the actual attainment, by the name of Robert Allenby (12 July 1971).

He declared his intention to play the sport of golf for money in 1991. He joined what had just the previous year been known as the PGA Tour of Australia, an entity that came into existence when Allenby was just two years of age, which had switched names to the current PGA Tour of Australasia in 1991.

Robert Allenby had a hot start to that endeavour, topping the tour in his first year and duplicating the accomplishment in 1994. To date, he has won 13 events on the Australian tour, 12 as a professional and one as an amateur.

He moved up a notch, focusing on the European Tour up until 1998. He notched a total of four wins during those early years, some of them against competitors who have been giving the U.S. Ryder Cup contingent fits for years. Three of those wins happened in 1996, which resulted in his ranking third on the Order of Merit. Results of that calibre had him placed in the top 20 of the world rankings.

For someone who has never done especially well in the world’s Major tournaments, it is essential to realise that the official rankings, rankings which rely entirely on results and nothing subjective, placed him at better than all but 19 golfers in the world.

That year held a serious misfortune for Allenby, as he was involved in an October traffic accident in Spain where he sustained a broken sternum and facial injuries. His subsequent recovery found him as the recipient of the 2001 Ben Hogan Award from the Golf Writers Association of America, an award that commemorates the recovery of Ben Hogan from a serious auto accident that very nearly derailed his career.

That level of performance was more than adequate to get Allenby to the main stage in 1999, the result of ranking 17th at the 1998 Q School.

His ranking that first year plummeted to 126th on the PGA Money List, one spot outside the magic number for exempt status. Nevertheless, he was able to get into some fields the following year, 2000, where he turned doubters into believers by winning the Shell Houston Open (275/13 under par) and the Advil Western Open (274/14 under par).

Allenby backed that with victories in the 2001 Nissan Open (276/8 under par), where he won an incredible 5-way playoff, and the Pennsylvania Marconi Classic, where he shot a 19 under 269 for a comfortable three shot victory.

He has laboured for the past 13 PGA seasons without a victory. His play has been consistent, if not spectacular, and adequate enough to earn him a sport in the FedExCup playoffs every year since the 2007 inception of that format, with the exception of 2013, which also marked the end of a 13 year streak inside the top 125 on the money list, that magic level that makes a player exempt from qualifying.

Robert Allenby has won four times on the European Tour, the first coming in the 1994 Honda Open. Two years later he was the victor in the Alamo English Open, followed by the Peugeot Open de France. It would seem that Allenby has an affinity for automobile-themed events, but he also claimed the One2One British Masters, where he got the better of Miguel Angel Martin in a one hole playoff.

His record on the Australasian Tour currently stands at 13 victories, with the high point being his Order of Merit awards in 1992 and 1994.

In association with his golfing career, Robert Allenby’s community involvement includes his role as a spokesperson the Challenge Cancer Support Network. Robert Allenby Golf Day has raised almost $10 million in support of children with cancer and blood disorders. He resides in Florida, where he started the Robert Allenby Bluewater Golf and Fishing Invitational that benefits kids with cancer and special needs in Florida’s Palm Beach County.

Allenby currently ranks number 19 on the list of winners on the Australasian Tour. He is one spot behind Craig Parry and two in front of Ian Baker-Finch, just to supply some perspective. Jack Nicklaus is 29th, but the inescapable comparison betwixt Robert Allenby and Greg Norman finds him 16 places behind the Shark, with 13 wins for Allenby and 31 for Norman.