Ricky Ponting: For cricket fans, both Australian and those from other nations that participate in the game, the name of Ricky Ponting is well known and frequently mentioned when the subject of the best cricket players of all time arises.

A thorough examination of his accomplishments would require volumes, of which there are already at least eight. 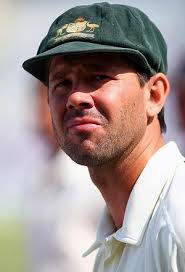 What we propose to do here is to give a brief examination of the man, a few of his career achievements, a look at how he played the game, and some reflections of those against whom he competed.

Ricky Thomas Ponting was born 19 December 1974, a decided disadvantage when it comes to Christmas presents, but something over which he lacked much control.

He hails from Launceston, Tasmania, stands 179cm. in stature, bats right, bowls right, only occasionally, with medium pace and fills the role of batsman predominantly.

Ponting’s father Graeme was an entirely adequate cricketer and also played a bit of footy. His mother Lorraine was a well thought of vigoro player in her youth. Ricky has an uncle, Greg Campbell, who played two years’ worth of Test for Australia in 1989-90. AS if often found to be the case, an athletic family seems to produce athletic children, and Ricky Ponting can certainly claim the correct pedigree.

It should suffice to say, with sincere apologies to Cricket aficionados who have the time and inclination to enjoy and digest the reams of statistical detail provided by the sometimes glacial progress of a Cricket match, that Ricky Ponting made a lasting impression on the junior ranks.

It should be mentioned that during his early sporting life, he showed promise at Australian Rules Football, and he could possibly have chosen that route, but he experienced the misfortune of severely breaking breaking the humerus of his right arm (nod to detail-oriented Cricket fans) that forced him to abandon football.

Ricky Ponting was at the age of 17, not quite 18, when he became the youngest player to appear for Tasmania in a Sheffield Shield match, just two weeks younger than another great to whom Ponting is often compared favourably, David Boon.

He represented himself and his team quite adequately, routinely posting centuries, some of those consecutively, whilst becoming the youngest batsman to record a first-class century. He far outstripped his season goal of 500 runs by scoring almost 800.

Ponting’s output domestically resulted in his being selected for the Australian ODI team in 1995. He performed admirable in that series against New Zealand, South Africa and India.

He served as a specialist batsman for a tour of the powerhouse West Indies, renowned for its highly regarded fast bowlers. Ponting himself considered this selection a great honour.

In the 1996 World Cup, Ricky Ponting scored 102 runs from 112 balls against that same West Indies squad.

India was on the schedule for Australia and Ponting in 1998, and the team from India trounced the Australians. Ponting took out his frustration in a night club in Kolkata, from which his was thrown out for “misbehaving,” intolerable for a cricketer, and resulting in a fine of $1000.

The incident may have had some impact on his results, but Ponting was back to form in the 1999 World Cup.

The Australian team was recording mixed results, but Ponting was putting up some enviable numbers.

He had to endure a slump for a period thereafter, and it was not until just ahead of the first Test of the 2000-01 season that he regained his form once again. He was back with Tasmania again when he scored 233 against highly regarded bowlers for Queensland. At this time, some of his peers were comparing him favourably with the world’s best batsmen at the time, Sachin Tendulkar and Brian Lara, by typically understated Steve Waugh. Ponting’s numbers seem to have borne Waugh’s statement out.

2003 was the year in which Ricky Ponting set a record for most runs by an Australian in a calendar year, including a career high of 257 at Melbourne. That year also found him becoming only the second player to hit three double-centuries in a calendar year.

He continued to perform at peak efficiency in the following years, becoming the third Australian to reach 10,000 career Test runs in 2008, as well as only the seventh player ever to do so.

It is only natural that his form would begin to decline thereafter, but it would certainly evoke no argument from anyone that even a reduced Ricky Ponting was still far superior to no Ponting whatsoever.

Ricky Ponting was eventually compelled to retire from Test cricket in 2012. He continues to play on a limited basis at this time, but Time waits for no one, and so what the future hold for him would be nothing other than idle speculation.

Ricky Ponting was/is a fierce competitor, sometimes so much so that paragons of etiquette were often critical of his on-field conduct. The press/public in Bangladesh went so far as to accuse him of, “badgering the umpires until he got what he wanted.”

As a batsman, Ponting obviously has/had few equals. He can play a wide range of shots with style and élan, and was considered particularly adept at the hook and the pull shot.

Ricky was seldom called on to bowl, but he is rated as one of the world’s most proficient fielders. He had a strong and accurate throwing arm, so all in all, Ponting would have to be considered a great all-round player.

To quote South African captain Graeme Smith, “Ponting was the toughest competitor against whom I have ever player.”

Allan Border, himself a worthy cricketer who at one time served as captain of the Australian team, praised Ponting’s determination courage and skill. He also had positive things to say about Ponting’s leadership skills.

Ricky Ponting had/has his critics of course, as is to be expected, but no measure in any way objective could fail to proclaim him as one of the best cricketers of time. Many up-and-coming players hold him as their idol and aspire to accomplish at least part of what Ponting did, even if many will never rise that high.