Four thoroughbred race horses were inducted into the Australian Racing Hall of Fame in the 2014 class. The most recent, in terms of the years when it competed, was Lonhro, a horse that we examined previously.

The oldest of the competitors, our subject for today, is Rain Lover, foaled in 1964, a stayer that was the first horse to win two Melbourne Cups since Peter Pan accomplished the feat in 1932 and 1934, and the first to notch consecutive Melbourne Cup victories since Archer took home Australian racing’s biggest prize in the first two editions of the race in 1861 and 1862.

That credential alone probably would have made the big bay stallion a lead pipe cinch for induction into the Hall, but he backed those two races with 15 more wins and 25 placings out of 46 jumps, leaving just eight races where he did not supply punters with anything to show for their confidence in him. 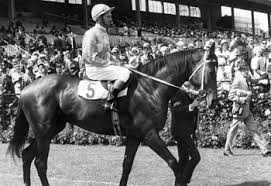 Of course, fans of racing history will recall that Rain Lover’s second Melbourne Cup victory was the occasion of the doping scandal that compelled Bart Cummings to scratch heavily favoured Big Philou less than an hour before The Race That Stops A Nation was able to stop anything whatsoever.

Still, in a victory that will have What If controversies associated with it for eternity, Rain Lover lugged a little above 60 kg, including jockey Jim Johnson, to the finish line in advance of Alsop and 21 other of the finest available thoroughbred stayers in a very respectable time of 3:21.50. Rain Lover could not achieve favourite’s odds for the race, despite having won the previous year by eight lengths.

Rain Lover was foaled in 1964. His sire was a good middle distance horse hailing from Great Britain named Latin Lover, whose sire was undefeated Ribot, foaled in Great Britain of predominantly Italian lines.

Rain Lover’s dam was a native Australian going by the name of Rain Spot. On his sire’s side, Rain Lover can claim connections to Hyperion and Gainsborough. Scapa Flow is revealed on the distaff side, and lightly raced but undefeated Hurry On from Great Britain shows up in both his sire’s and his dam’s lines.

It is not uncommon for the great stayers to take some time to find their way, and Rain Lover was no exception. As a two-year-old he staged a victory at Morphettville that had an unexceptional field in a contest that was a mile in length. He began to reveal his talent in his preparation as a three-year-old, posting a second in the SA St Leger and an easy victory in the 1968 Adelaide Cup.

He won the Mackinnon Stakes, placed in several other races and essentially lapped the field in his first Melbourne Cup victory, where he set the record for elapsed time by close to half a second.

He also had the opportunity in 1970 to prove his mettle against the formidable Big Philou in a match race that he lost by half a head, only to come back a couple of weeks later to best Big Philou in Randwick’s Autumn Stakes. The match race was never intended to be a match race. It was, in fact, the Queen Elizabeth Stakes, but an epidemic of scratchings left the two undisputed heavyweights of staying racing alone to contest for superiority over 2000 metres of Flemington turf.

It was a race that would go down in history as one of the greatest of all time, one that would burnish the race calling reputation of race caller Bert Bryant.

Besides the two Melbourne Cup wins, Rain Lover acquitted himself admirably. His talent level was good enough that he accomplished many significant wins under the tutelage of trainer Mick L. Robins, who, with no disrespect intended, was working as a coal miner before receiving his trainers’ license and the responsibility for Rain Lover’s preparation, which is something of a story in and of itself, perhaps one for another time.

All, or at least most of these races, would have been Group 1 category according to the classification system that made its debut in 1980.

When he retired in 1970, a year in which he won no fewer than three prestigious events, those being his second victory in the St. George Stakes, the Victoria Racing Club are Queens Plate, and the Australian Jockey Club’s Autumn Stakes.

Rain Lover had earned for owner Clifford Reid just over $188,000, a ludicrously paltry sum by today’s standard that would not have been sufficient to lure Black Caviar out of her stall, but in addition to his two Melbourne Cup wins, he also can include amongst his impressive credentials the fact that he ran almost twice as many times as many of today’s typical thoroughbred.

That earnings figure, incidentally, placed Rain Lover second to only Tulloch on the list of Australian money winners up to that time.

Rain Lover was awarded Australian Horse of the Year honours in 1969, but had to wait until 2014 for the Australian Racing Hall of Fame to deem him fit for that recognition, 25 years beyond his 1989 death. A race named for him, the SAJC Rain Lover Plate, is held annually at Morphettville racecourse in Adelaide.

He stood stud from 1970 until his death in 1989, with perhaps his most productive progeny being VATC Easter Cup winner Princess Veronica.

His achievements on the turf were unquestionably more than adequate to justify his induction into the Hall. His two races against Big Philou should have been more than sufficient to erase any possible stigma attached to the 1969 Melbourne Cup win, and his overall record was beyond reproach.