At the time of writing Quade Cooper just 22 years of age, Quade Cooper capped 2010 by capturing the Super 14 Player of the Year Award

Depending on whose opinion you support, it is either Australian Rules or rugby that is the most popular spectator sport in Australia.

Those who support football have a valid argument in that the fan base seems to be larger and more passionate, but those who favour rugby would point out that the game is played on an international stage and has broader world-wide support.

That debate aside, because it is not our wish to antagonise anyone, rugby will be the subject for the moment and particular attention will be devoted to the life, times, and rugby playing career of Quade S. Cooper. 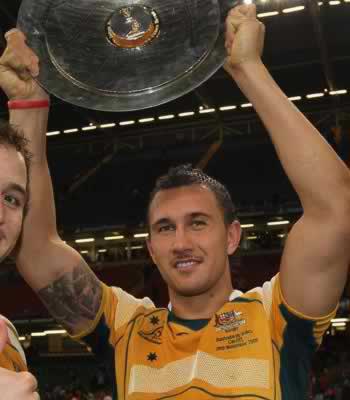 Quade Cooper was born in Auckland New Zealand, on 5 April 1988. He was very young when his family relocated to Tokoroa. Another move came when Cooper was 13, this time to Brisbane, Australia, the year being 2001. He has a notable cousin, Sean Maitland, who has distinguished himself whilst playing for the Glasgow Warriors in Scotland, where it is said that it is sometimes difficult to distinguish the scrum on the field from the scrum in the stands. Sean and Quade are separated in age by only a few months, Quade being the elder.

Cooper attended the Springwood State High School in Brisbane before being the recipient of a scholarship that permitted him to attend the Anglican Church Grammar School. He distinguished himself as a rugby player here for the first time, starring for the 1st XV rugby team as he approached his later teenage years. In the first year of his ascendance, his team tied for the Queensland GPS premiership with Brisbane State High School.

He played quite well, so well indeed that he was honoured with selection to the Australian Schoolboys in years 2005 and 2006. His position was Fly-half, which would be his preference throughout his career, although he has on occasion played Inside Centre.

Quade Cooper became a member of the Australian Rugby Union high performance programme as a part of the National Talent Squad in 2007, and then entered into a contractual arrangement with the Queensland Reds.

He made his first appearance in Round 2 of that season. Playing the Crusaders at Christchurch’s Jade Stadium, his team lost by the final tally of 33-22.

Quade Cooper scored for the first time in early March of that year, having been given a starting role, but his team again went down to defeat, this time losing to the visiting Lions at Suncorp Stadium by a score of 20-26.

He would also play a bit with the East Coast Aces during 2007.

2008 was far kinder to the Reds, with some kudos due to Cooper. They scored a massive upset over the Bulls, 40-8. Quade Cooper himself would get some exposure at the international level, coming in as a reserve and scoring the deciding try in a 30-20 victory against Italy.

Quade Cooper also began that year to play more for the National team, the Wallabies.

His continuing growth as a rugby player and the resulting publicity to which he was subject during the 2009 season found him well established for the 2010 season.

Still just 22 years of age, Quade Cooper capped 2010 by capturing the Super 14 Player of the Year Award. In 2011, he inked a contract with player agent Khoder Nasser and continued to do well with the Reds, where his stellar performances up to and in the final were the stuff of much admiration.

A severe injury to his Anterior Cruciate Ligament (ACL) suffered in the 2011 World Cup sidelined him for a bit. During the middle of 2012, it was announced that Cooper had agreed to stay with the Reds through the 2015 season.

Quade Cooper made an appearance in the Super Rugby season. He was carded during a game in week 18 for a high tackle on Berrick Barnes, a former Reds teammate of Cooper and also still a teammate for the National team. His resultant suspension forced him to sit out the elimination final against the Sharks, which the Reds subsequently lost by the score of 30-17.

Quade Cooper also performed well for the Wallabies after being named to the 30 man squad for the 2011 World Cup. He struggled to achieve the level of play he had demonstrated with the Reds and his earlier efforts for the National team.

New Zealand rugby fans expressed extreme displeasure at his performance in the prestigious World Cup, particularly in a match involving the All Blacks, although they were somewhat mollified when he turned in one of his customary high energy performances, this time assisting Berrick Barnes rather than high tackling him. Unfortunately a re-injury of his ACL took him out of that game at the 20 minute mark.

In 2012, Quade Cooper engaged in a bit of showmanship when he made a foray into boxing, winning as a cruiserweight against Barry Dunnett, who Cooper knocked out in the first round.

Quade Cooper nearly jumped from Union to League in 2008, almost making a deal with the Melbourne Storm. Rumours of a similar jump surfaced in 2010 when it was disclosed that Quade Cooper was considering an offer from the Parramatta Eels for the 2011 NRL season. This would have necessitated giving up the national team, and as is most often the case when these matters arise, money was the main consideration.

Quade Cooper, like many modern athletes, has had a brush or two with controversy. Players of all sports in this era seem incapable of putting down the smart phone and seem to all share a remarkable proclivity to make all too public their thoughts on how those responsible for running the teams that provide their livelihoods would be well advised to listen to them, rather than keeping their mouths closed and doing their jobs.

Quade Cooper’s indiscretion in this regard was in the form of Twitter posts criticising the personnel and playing style of the Wallabies, and the fact that the coach did not seek his advice on these matters.

He was fined for that outburst, suspended for three matches by the Wallabies, which almost resulted in Copper’s abandonment of Australian rugby, but in the end, cooler heads prevailed.