PointsBet is one of the newer choices for online bookmaking in Australia.

They represent something vastly different from other online bookies, in that they offer spread betting in addition to conventional fixed odds betting. Join Here

Spread betting requires an entirely different mindset and punters new to the concept need to quickly grasp the reality that unlike conventional fixed odds bets, where a losing bet costs only the amount staked when the bet was entered, losses on a spread bet can escalate beyond the original wager. The same is true of winning wagers, dividends can exceed the amount staked, but that is not the source of any fear.

We will supply some scenarios further on, but first, here are some details pertaining to PointsBet that we hope serve some use to anyone considering establishing a PointsBet membership.

PointsBet came online in early 2017 and was granted permission to operate by the Northern Territory Racing Commission. The company lists a Post Office box in Richmond, Victoria as the mailing address.

Their website lists only Visa and MasterCard as ways to deposit and bank transfer as ways to make withdrawals, but this limitation is often present with newer bookmaking agencies and it might be assumed that more options may come along; including a branded bank card that is increasingly the choice for many punters.

PointsBet does offer Fixed Odds betting for those who would prefer that option. Our quick and random odds comparison snapshot taken just prior to the Australia v France match of the FIFA 2018 World Cup Finals showed them offering a price of $1.25 on Les Bleus and $11 on the Socceroos, compared to Ladbrokes, where the quotes were $1.27 and $10, so this is one instance where the value of shopping multiple online agencies reveals a wide discrepancy seldom encountered.

Less than a day before the match, PointsBet listed 100 markets, while Ladbrokes had 172 on offer. Either number would seem adequate and most recreational punters rarely delve into some of the bizarre exotics.

We checked an AFL fixture in the near future at the time this review was being conducted. The nest to bounce was the Carlton Blues v the Fremantle Dockers. PointsBet quoted the Blues at $2.20, the exact same price as Ladbrokes. PointsBet was offering $1.68 for the Dockers, compared to $1.70 from Ladbrokes.

PointsBet had 292 markets for the game, while Ladbrokes had 233. Form your own conclusion. For ours, the siren will sound before we could look at that many markets.

We were tempted to skip thoroughbred racing, because it is a quiet time of year, but we did not want racing punters to feel slighted, so we had a look at the Group 3 Hyperion Stakes at Belmont, Western Australia.

PointsBet was offering a $1.80 win price on the favourite, Material Man, while Ladbrokes had him at $1.85. We seldom observe that sort of difference; quotes are normally pennies apart, if different at all.

All the usual topics, such as minimum deposit, minimum wager, maximum win and other such, we observed to be right in line with the PointsBet competitors, nothing on which to base a decision. Join Here

As is often our experience, we have grown to like the PointsBet better with each visit.

It contains the familiar three-column layout, with the notable exception that the navigation pane on the left stays out of sight until a three horizontal line icon in the top left corner of the pages is clicked. That icon is known as the hamburger menu, for those who may not have known, or were wondering. We have learned to enjoy this feature, as it keeps the screen clutter down to a minimum.

The PointsBet colour scheme was initially off-putting, calling to mind something Darth Vader would conjure if he were a webpage designer, but after a bit, we no longer cared, and we think most people will have a similar reaction.

PointsBet has a different system for the bet slip. It opens in the centre of the screen when a selection is made and it cannot be repositioned by the user. The bet slip seemed to work just fine, however, and punters can choose to enter wagers by clicking on pre-set amounts provided by PointsBet, or by using their own keyboard.

PointsBet does offer mobile applications for Android and iPhone and users of either will have no issues, well, so long as they do not try using the Android app on an iPhone and vice versa. For the past several years, we have been dismissing apps in favour of simply using a mobile browser to visit a bookie webpage, just because it is far less bother. Join Here 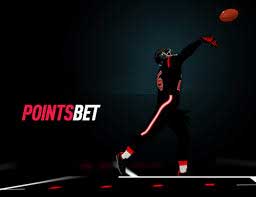 What to say here? Something between Let the Buyer Beware and Abandon All Hope, Ye Who Enter Here.

We advise anyone who is curious about spread betting, and to this point, PointsBet is the only Australian agency to offer it, to plan on studying the concept thoroughly and gain a solid understanding.

You can lose more than you wagered. Join Here

To access spread betting on PointsBet, it is necessary to select a fixture and switch from Fixed Odds to Spreads.

The three-point difference is the spread and gives PointsBet the edge.

A spread bet on the Dockers would mean that in order for the bet to win, the Dockers would have to win by at least seven points. If they won by more, your winner could return a higher dividend, but if they win by just six, you lose. It is possible to pick a winner and lose the bet.

There were also spread markets on such thing as total match points and plenty of markets on the performance of Nat Fyfe and other players. We did enjoy the analysis PointsBet provided, but the game must still be played and surprises are part and parcel of wagering.

We found nothing that would cause us to unequivocally warn people off PointsBet, but we strongly suggest that anyone who wants to have a go at spread betting take the time to understand the true risks.

The PointsBet website explanation is a good place to start and it would be wise to consult multiple sources that do not have a stake in the game.

By offering Fixed Odds betting, PointsBet seems to offer an opportunity for punters to approach spread betting gradually and based on our quick comparison of odds, we found that PointsBet is worth a look for those price conscious punters who enjoy getting a punt on at the best possible price.

PointsBet was attractive in some markets and less attractive in others, which is something we have learned to expect over the course of reviewing bookmakers all these years. Join Here