Patrick Cummins: Australia has had its share of highly proficient cricketers in the past.

Men who made their marks through a combination of prowess and equally as important, occupied centre stage of domestic and international cricket for long periods of time to cement their place in the annals of cricket.

These men made an additional contribution, one that is true of all athletic endeavors, in establishing standards by which succeeding generations of competitors could judge where they were in their career progression by comparing their statistics against those who had been successful at surpassing the achievements of those that came before them. 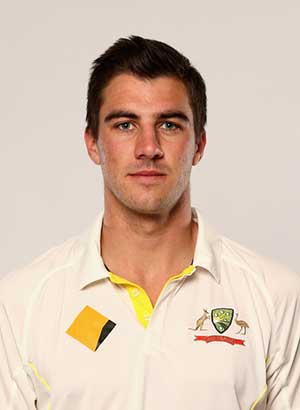 Batsmen have their heroes whom they hope to equal or surpass, and bowlers likewise look at the past to find heroes to emulate in their specialty.

An interesting facet of this reality is that up-and-coming players judge themselves against former high achievers and not against the performances of those who were considered merely adequate.

The result is that records that were considered unassailable when established are eventually overtaken to be replaced by a newer unassailable mark that will be the target of future generations.

Performance levels thus increase either gradually, or occasionally meteorically, leaving much room for speculation over how far it is actually possible to raise the bar.

In the realm of cricket, Patrick James “Cummo” Cummins is a cricketer who finds himself in the early stages of chasing the records of those who came before him with many years in front of him. The only thing of which he can be truly certain at this time is that the clock is ticking and that there is a future date on the calendar at which time he will be looking back rather than ahead.

Patrick Cummins was born in the Westmead section of Sydney, one of the western suburbs, on 8 May 1993. He spent his formative years growing up in the town of Mount Riverview, a small town of less than 3,000 people 70 kilometres to the west of Sydney in the heart of the Blue Mountains.

Patrick Cummins is one of five children, three boys and two girls. He attended school at a facility established just 10 years prior to his birth, St. Paul’s Grammar School in Cranebrook, and independent coeducational school with a curriculum that spans Pre-Kindergarten to Year 12.

He made effective use of his status as an Elite Athlete Programme scholar. He also is pursuing credentials as a Bachelor of Business at the Sydney based University of Technology.

He lists as his childhood idol cricketer Brett Lee, with whom he had the opportunity of playing briefly with at both the domestic and the international level prior to Lee’s 2008 retirement from Test cricket and subsequent retirement from ODI in 2012.

At the young age of 20, it is obvious that Patrick Cummins does not have a long resume of accomplishments, but he is interesting to examine because of the possibly high potential he represents to the future of domestic and international cricket in Australia.

Like his idol, Brett Lee, Patrick Cummins is a fast bowler, or paceman according to which terminology is preferred. At 1.92 metres in height, Cummins would certainly be considered as having the necessary physical attributes for his chosen style.

Cummins played his formative junior cricket at the Glenbrook Blaxland Cricket Club in his home territory. He first appeared playing first-grade for Penrith in 2010.

Playing against Tasmania in the preliminary final of the KFC Twenty20 Big Bash in 2010-2011, Patrick Cummins took 4 for 16, tied for top wicket taker honours, and was designated man of the match.

He made his first-class debut early in 2011, and then joined the successors to the New South Wales Blues after the demise of the KFC Twenty20 Big Bash, the Sydney Sixers.

Cummins started immediately to rise quickly in the ranks. He signed a contract with Cricket Australia in June of 2011. By October, he was playing in Twenty20 matches against South Africa, performing so admirably that he was selected to play Test cricket, also against South Africa.

The following month of November saw Patrick Cummins entrusted to make his Test debut in the City of Johannesburg, South Africa, in The Wanderers Ground, known also as the Bullring for the intimidation level it presents to visiting players. In so doing, he became the youngest Australian cricketer since Ian Craig, the youngest batsman ever to record a first-class double century, since 1953 to compete in test.

His performance on that occasion included the taking of 1/38 and 6/79, making him the second youngest to ever take six in an innings. He also scored 13, along with a match winning four, to earn the man of the match award.

Most unfortunate for Patrick Cummins is that he seems to be frequently hampered by the bane of fast bowlers, a back injury due to all the stress that fast bowling generates with its unnatural motion and bodily contortions. If he is to continue his impressive beginning, this situation must be resolved satisfactorily.

With someone this young and at such an early stage of his career, it is impossible to predict with any certainly what his future potential is. The inevitable comparisons betwixt him at his age to the earlier greats of the game at the same age have certainly not been lacking. Much ado is paid to how quickly he has made an impact, with mention of names such as 19th century medium-pacer Tom Garret and Pakistani pace legend Wasim Akram oft cited for comparative purposes.

Patrick Cummins has the cricket world excited because he shows maturity far beyond his years, along with his raw athletic potential which has seen his deliveries clocked consistently beyond the 140km/hr. mark.

His head seems to be in the right place, also, as he has avoided the unfortunate tendency of those young men who have let early initial success cause them to become divas and poor sportsmen on the field of play as well as off. He considers himself fortunate to have been positively influenced by positive mentors, and he quite humbly attributes some of his achievements to the aforementioned Brett Lee and to Stuart Clark, Mitchell Johnson and Doug Bollinger.