Malua is rated as one of the best ever thoroughbreds to race in Australia and regarded as the most versatile.

He made 47 starts and went on to win 12 times, finished second 10 times and was third 3 times. His major wins were in the 1884 Adelaide Cup, the Newmarket Handicap of 1984 and the Melbourne Stakes held the same year. 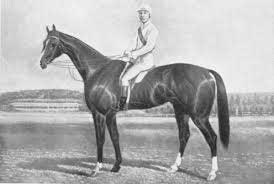 While being bred by John Field in Tasmania, he was sold when he was just one year old to the then Prime Minister of Tasmania, Thomas Reibey. Upon being sold and sent to Tasmania, Malua had a change of name and he was now called Bagot.

He raced in Tasmania for a short time, but was victorious in the three races in which he participated. Afterwards, he was sold to J. Inglis, who paid 500 guineas for him and then changed his name back to Malua. Malua was the winner of the 1844 Newmarket Handicap, which was over 6 furlongs.

He then went on to win the Oakleigh Plate which was also over 6 furlongs and he carried 9 stone 7 pounds. The tactic of running on the outside rail was first applied by Malua’s jockey on his way to winning the Newmarket Handicap. 1884 was certainly Malua’s year as also won the Spring Stakes in Sydney and the Melbourne Stakes.

Following his win in the Melbourne Stakes, Malua was clearly a force to reckon with, and the odds favoured him en route to participating in the Flying Stakes, which was a weight-for-age (w.f.a) competition over a distance of 1,200 metres. He won the race. His win at the Melbourne Stakes was a tight finish, but he eventually won it by half a length while carrying 9 stone 9 pounds.

In 1886, Malua continued with his great form and won the Australian Cup while carrying 9 stone 9 pounds. Two days after winning the Australian Cup, Malua was unplaced at the Champion Stakes, which was, ran over a distance of 4800 metres. The events at the Champion Stakes were a pointer of things to come, as Malua went for three years without any win.

Malua was then entered into jumping, at a time when his owner had contemplated retiring him, only to be moved by the way Malua jumped over the high fences in his farm. To the surprise of many people in attendance, even after having stayed out that long and having not run for four straight months, Malua was victorious at the VRC Grand National Hurdle, where his owner Mr. J Inglis was riding him.

Even after this big win, he was seemingly in bad form, and he later ran 11 races with only a single win. Malua’s sheer versatility and strength might have been apparent to all, especially considering his amazing transition from the flat course to hurdles, but he was surely showing signs of growing tired.

Being the strong horse with the extraordinary versatility that he had, Malua was able to juggle between racing and siring new progenies. During his time in the stud, he was successful in siring nine progenies who went on to win 13 stakes.

Among those winners were Malvolio, who won the 1891 Melbourne Cup, Ingliston who won the 1900 Caulfield Cup and Mora who won the VRC October Stakes, VRC Melbourne Stakes and the SAJC Adelaide Cup.