Makybe Diva: One of the interesting aspects of sports is that every era seems to produce an event or a champion that seemingly raises the bar to new levels that cannot conceivably be exceeded; however, succeeding generations come along and eclipse the previous standard, setting another mark that is likewise perceived as unassailable.

Just when it seems as though the upper limits of performance have been established, a competitor arrives on the scene that has used those earlier unassailable records as a benchmark upon which to set their sights, ignoring anyone and all things that say that something cannot be done. 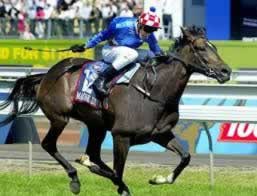 Building upon and exceeding the accomplishments of predecessors is at times referred to as Standing On the Shoulders of Giants, with something of a pejorative connotation, as though new accomplishments that surpass the old are a case of accidental good fortune that could not have been achieved had it not been for the earlier trail blazers.

There is a certain element of truth to the old adage, but in the case of achievements in the realm of sports, however, those giants of bygone eras could justifiably be accused of guilt of the same crime, but a more pragmatic view of the situation would be that standing on the shoulders of giants is an excellent way to get a clearer view of things.

When the subject turns to thoroughbred racehorses, it is necessary to modify the old expression, perhaps something along the lines of Racing on the Withers of Giants, but the concept remains intact.

The shoulders or withers that provide the standing spot for the subject in question are some of the greatest to grace the Australian turf. They all share a rare distinction, that of attaining the list of two-time winners of the country’s most prestigious horse race, the Melbourne Cup.

Archer, Peter Pan, Rain Lover, Think Big. The list is rather short and spans a time period of over 100 years. Many fans and expert observers would have said that the days of racing where a horse could win twice were numbered, replaced by specialists that focused on the more plentiful sprint distances.

It is safe to say that expert and casual observer alike were unprepared for the singular accomplishment that happened in the early years of the 21st century when Makybe Diva pulled off what may be considered the most improbable of all the possible permutations that sport of any kind offers when that formidable mare captured three consecutive Melbourne Cups.

Foaled in England on 21 March 1999, none of the British buyers were sufficiently attracted to her to result in her purchase at the Tatts Newmarket sale. She and her dam were shipped, you might be tempted to say transported, in 2000, to Australia.

Her bloodlines were not lacking, with great Irish and Canadian champions in her line. Due to the complexities of assigning ages to horses, she was moved up in age as the result of being born in the northern hemisphere, so she was junior to many of the similarly aged racers born in the southern.

This may have had some impact in the decision that resulted in her only being tried once as a two-year-old, when in July of 2002, she rain in a 1000 metre trial. In the span of just two weeks, she became classified as a three-year old and placed fourth in a maiden event at Benalla. It was only a month later, in another maiden race, where she won at 1600 metres, giving indications of developing into a more than competent middle distance galloper.

That win came on a slow track as did her first Group win that followed, this one over 2000 metres.

More respectable results followed and a victory in the 2500 metre Queen Elizabeth Stakes gained her admission to the next edition of the Melbourne Cup. Her trainers and connections deserve much credit for recognising her potential as a stayer and for gradually moving her up in distance. It was around this time that she received a jockey upgrade in the form of Glenn Boss.

She could do no better than fourth in the Caulfield Cup, but in coming from well back to reel in much of the field, she attracted some notice, enough to result in her going off as the second favourite in the 2003 Cup. She of course won, coming from the back to chase down She’s Archie and Jardines Lookout.

She backed that and proved it no fluke by winning the Sydney Cup early in 2004, the fourth horse in racing history to supply a Sydney Cup/Melbourne Cup double, and the first mare to do so.

She was spelled and the height of the season saw nothing of much portent other than a second in the Caulfield Cup, a race many feel she could have won if not for having been sent wide in the final turn.

A couple of weeks was all it took to erase the sting of that loss, when she was again steered from the back by Boss for a comfortable 1.3 length win in the 2004 Melbourne Cup.

2005 supplied another remarkable win when she was able to run wide successfully and post the win in the W.S. Cox Plate.

Aware that they were in position to etch an indelible place in history, and given that she had displayed the ability to be dominant on slow tracks, her trainer Lee Freedman hinted that if something were not done to mitigate the hard tracks that were the result of a prolonged drought, Makybe Diva would perhaps be held out of the 2005 Cup, the spectre of which prompted the stewards of the VRC to soften the Flemington turf with a generous application of water.

Once again, Makybe Diva, running what turned out to be her last race, came from the pack and reeled in the front-runners in the last 300 metres to post and 1-1/4 length victory and secure her place in horse racing history as the only thoroughbred to win three Cups.

She ran only 36 times in her career. She won 15 times, earned four second place finishes and three thirds, whilst running unplaced 14 times. That is not perhaps the type of resume one associates with all-time great status, but three of those 15 victories alone were more than enough to ensure immediate entry upon eligibility into the Australian Racing Hall of Fame.

Only time will tell if her Melbourne Cup accomplishments will ever be matched, or even exceeded, but it is just possible that at this very moment, perhaps in verdant green pasture in New Zealand, on the moors of Ireland, England, or someplace entirely removed, a foal is in the offing that may use the highly estimable shoulders of Makybe Diva as a perch from where to see even greater accomplishments.