Edgar Clive Britt is one of the all-time leading Australian jockeys. He did the majority of his racing on other continents, especially Europe, with major portions of that stint coming in Great Britain. He also rode in America in 1933, where he managed to win the Baltimore Cup.

Edgar Clive Britt was born in 1913 in the Sydney suburb of Five Dock, and has managed to survive to the age of 100, despite having spent a major portion of his life piloting high-speed racehorses whilst others were doing the same thing simultaneously within inches of him. 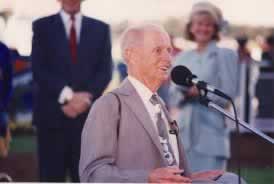 Britt was racing again in Australia during 1934, where he won the Sydney Cup aboard Broad Arrow, a horse of predominantly British blood.

He next spent 10 years riding in India, where his talent began to flourish and he won every Indian race of any consequence, some of them on multiple occasions. He was the top jockey in India for eight of those ten years.

India was a fairly fortuitous spot to occupy in those years. World War II was going on, but Britt was not pressed into military service as the fighting forces were not in much need of proficient jockeys. At the end of the war, one of Britt’s India contacts, the Maharaja of Baroda, retained the jockey to ride in Great Britain.

Edgar Clive Britt spent the remainder of his jockey career there, finally calling it a day in 1959. He did quite well there; winning on over 1,000 occasions and yearly rode an average of approximately 85 winners every season.

His best showings were during the period from 1947 and 1956, where his consistent high production found him regularly well within the top 10 jockeys in England. He nearly doubled his victory average in 1948, when he took the post on over 140 occasions. During his English sojourn, he would win the Irish Derby in 1947, a race that made its debut the same year as the Melbourne Cup.

He was riding Sayajitao for that victory, the horse that was sired by undefeated Nearco, the Italian product known for Nearctic and others, as well as being a prominent contributor to the lines of Northern Dancer and Bold Ruler.

Edgar Clive Britt also served aboard Winooka, the winner of the All-Aged Plate and the Doncaster Handicap, the latter being the race in which Phar Lap’s Australasian speed record was eclipsed. That horse would be then sent to America, where he was under Britt when the pair won in Baltimore’s Pimlico race course.

Another notable thoroughbred to do well under Britt’s steering was My Babu, one of the Maharajah’s horses. One other was Britt’s mount for the 1953 win in the 2,000 Guineas, Nearula, another horse with close ties to Nearco.

Even though Winooka beat Phar Lap’s record for the mile in winning the Doncaster Handicap, Edgar Clive Britt, being perhaps the only living person who competed against that giant or thoroughbred racing, had nothing but admiration for Phar Lap and his jockey, Jim Pike.

Britt would say, “All I can recall is looking at his big backside disappearing in front of me.” Britt also had this to say about Pike, “Although Jim gave no quarter in a race, he often used to get me in a corner afterwards to point out the mistakes I’d made and how I could have avoided them.” Those remarks were from an interview with Britt that took place less than a fortnight prior to the observance of Britt’s one hundredth birthday and was published in The Daily Telegraph.

Britt, after concluding his racing stint in 1959, would serve as that publication’s racing columnist for 16 years, where his keen insights and firsthand experiences served him and his readers quite well.

Edgar Clive Britt is sometimes overlooked when the subject of great Australian jockeys arises, due in no small part to the vast majority of his racing taking place abroad. Before heading overseas, however, he took part in the Melbourne Cup on two occasions. In 1932, he was unplaced in a race that was won by the immortal Peter Pan.

He fared much better in 1934, finishing fourth, where he probably had a nice view this time of Peter Pan’s backside, with maybe a glimpse of Darby Munro’s in the bargain.

1934 was the year that Britt and Broad Arrow combined for the Sydney Cup victory and a 12-1 payday. On that occasion, it was Munro, aboard Oro, who had the scenic view of Britt’s backside. Britt also won two other races at that meeting, courtesy of Mafoota and Turbulent.

Immediately at the conclusion of World War II, Britt was hired to ride for the King of England at the time, George VI. He fondly recalls that as an owner, the King preferred, despite having a firm grasp on racing, to leave racing instructions to his trainer. He also has recollections of meeting the present-day Queen and her sister Princess Margaret at Hurst Park when the two were but teenagers when he was scheduled to ride the Royal Family favourite at the time, Avila.

When the final tally on Edgar Britt’s racing career was tabulated, he had won over 2,000 times on four different continents, a fact made more significant by reason of competing against horses such as Peter Pan and Phar Lap, and jockeys such as Jim Pike and Darby Munro, and that is just in Australia.

Although recognition of his accomplishments was long in coming, it did arrive in time for Britt to do the proper amount of well-deserved basking. He was inducted into the Australian Racing Hall of Fame in 2004, the same year he was awarded an Order of Australia medal.

The name of Edgar Clive Britt is perhaps a bit obscure to some, but to those for and against whom he competed, he was known as a formidable competitor that could coax maximum effort from his mounts with a degree of competence that has seldom been exceeded.