Everyone enjoys the tale of a sports champion that not only enjoyed great success in their chosen endeavor, but if that success was achieved despite a challenge of any sort which made those accomplishments all the more remarkable, the tale takes on an added dimension of drama, making it all the more enjoyable.

Such is the case regarding Kingston Town, one of the greatest thoroughbred racehorses in the history of the sport of flat track racing. His record alone is nothing short of phenomenal; the fact that he ever won at all, let alone compile the spectacular record with which he is credited, is even more awe-inspiring in that he battled throughout his career leg injuries that have derailed the career of many before and since. 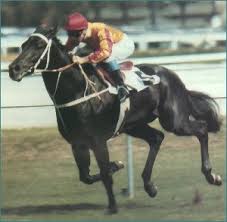 It would seem only logical to assume that a racehorse relies on its legs to compete, so a horse with sore legs is of little value.

Where to begin recounting his racing exploits is difficult. He is the only race horse to have won the Cox Plate three times. As one of the three most significant races on the Australian racing calendar, there is no way to belittle the level of competition he faced, yet in winning in 1980, 1981 and 1982, it could be said that that alone should have made Kingston Town worthy of Racing Hall of Fame induction. Many great horses have achieved similar notoriety with one, or even zero wins of that prestigious race.

Kingston Town’s sire was Bletchingly, a competent enough racer, even though tried only five times, he produced four wins. His lines on his dam’s side include a fourth generation connection to the U.S.A.’s Man O’ War and Great Britain’s Hyperion on his sire’s side.

He was paired with Ada Hunter, an un-raced German broodmare that was shipped to the U.S. in 1987, to produce Kingston Town. Bletchingly is best remembered as the Australian champion Sire three years running, from 1979 to 1981, five years subsequent to Kingston Town’s 1976 foaling.

The early career of Kingston Town was undistinguished. As a two-year-old, he finished dead last in his inaugural outing. He was subsequently gelded, a decision that improved his racing, but ruined the chances for his connections to capture stud fees. He returned at the end of his season as a two-year-old to capture a minor race at Rosehill, for which anyone willing to back a 33-1 runner was rewarded.

1980 was when he started to separate himself from his class of three-year-olds. He immediately went on a six-race winning streak. The first of these was a Group 1 win, the Spring Champion Stakes at Randwick. He would notch the first of his three Cox Plates that season, the first time he would win in Melbourne, leaving Prince Ruling and Our Paddy Boy to complete the placings. At the end of the season, Kingston Town had compiled a record of 14 victories from 18 starts.

The leg issues mentioned earlier caused him to be spelled for the autumn. Returning in the spring, he reeled off seven consecutive, including the second of his three Cox Plates. No longer was it possible to get anything like the 33-1 odds present in his first win.

He was tried in that year’s Melbourne Cup, but in all fairness, he never raced well at Flemington and the distance of the Cup was well beyond his accustomed races, yet, he still managed a runner-up finish in his final attempt in 1982.

Once again, leg problems would scratch most of the following year. The spring carnival of 1982 would turn out to be his last campaign, the highlight of which was the third Cox Plate win, often described as the most dramatic race in the history of Australian racing.

His third jockey for the event, Peter Cook was aboard. The pair was well back in the middle for most of the race. In fact, it was not until the final 200 metres that Kingston Town made his move, and it was one of the most astounding moves ever seen. It almost seemed as though the rest of the field was running in slow motion as Kingston Town made a four length deficit vanish in the span of a few strides. Famous race caller Bill Collins had emphatically declared near the end of the race that, “Kingston Town can’t win.”

It was to be the one occasion where Collins, known simply as, “the accurate one,” was to be completely inaccurate.

In winning, Kingston Town bested the horse that was to relegate him to second shortly thereafter in the Melbourne Cup, Gurner’s Lane.

Twenty-five days later, he would notch his final Group 1 victory, the 1800 metre Western Mail Classic at Perth’s Ascot Racecourse. This race would eventually, in 2007, become the Kingston Town Classic.

He was sent to the United States where it was hoped that the leg issues that essentially robbed him of half of his career could be rehabilitated, but it could be said that this was a somewhat unrealistic expectation, given the preponderance of dirt tracks in the U.S.

Kingston Town returned to Australia to live out his years in his native land. He was just 14 years old when an injury sustained whilst playing with a favourite mate of his resulted in his being put down in March of 1991.

Despite his leg issues, he managed to make 41 starts, winning 30 times. Remarkably, only three of those wins came away from Sydney tracks. He had returned over $1.6 million dollars of stakes winnings, which at that time was the record. Of the 11 races he did not win, he produced five seconds and two thirds, meaning that he was unplaced on only four occasions.

The name of Kingston Town will forever be associated with two major speculations: What could he have done had he remained healthy and what progeny might he have produced?

He was part of the inaugural class of horses inducted into the Racing Hall of Fame, a group that includes Bernborough, Phar Lap, Tulloch and Carbine. He had 11 other Group 1 wins to go with his Cox Plates and he was objectively the beneficiary of many events that were elevated to that status in 1980, when he notched six of his wins at that level, in so doing being named as the Australian Champion Racehorse of the Year.