Ken Rosewall. Casual tennis fans devoting a bit of attention to the game as it is currently exhibited will see the same supremely conditioned athletes that have always held sway on tennis courts of any composition, but those athletes have also elevated the pure physical requirements to a level that was unseen and considered beyond the realm of possibility during the era of twenty to thirty years ago.

The trend toward larger, stronger tennis players arguably had its start when Ivan Lendl emerged as the force he represented in the men’s’ game. It continues to this day where players such as Pete Sampras, Novak Djokovic and Roger Federer proved conclusively that men of stature could exhibit the same quickness and agility that was at one time thought to be the province of men of average height. 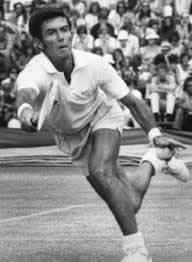 It is true that there were larger players in earlier times, but agile big men such as Stan Smith were the exception rather than the rule. The popularity of tennis in that age would objectively have to have been in part because the average man could relate to players who were closer in stature and weight to themselves. It is also certainly possible that one or more men will come along who defy the current trend.

The era just prior to the above champions was the last vestige of players such as Michael Chang and Andre Agassi, both of whom relied on agility and a competitive spirit to hold their own against the upcoming generation of taller, stronger players who dominate today.

Just before those two, Jimmy Connors, John McEnroe and Bjorn Borg were considered the prototypical tennis physiques, following in the footsteps of an earlier generation of compact players who carried familiar names such as Laver, and today’s subject, Ken Rosewall.

Ken Rosewall Born In Sydney In 1934

Born 2 November 1934, Kenneth Robert Rosewall was born in Sydney and lives there still. In his playing days, he was listed as being 5 ft. 7 inches (1.70m) tall and weighing 145 pounds (67 kg). An interesting fact about his early days and his introduction to tennis was that he was a natural left-hander, but his father taught him to play right-handed.

Unlike the golfer Greg Norman, who was also a natural left-hander who in most probability learned to play golf right-handed due to the scarcity of quality left-handed golf equipment, Rosewall never encountered a tennis racquet that cared in which hand it was held, so maybe only Ken’s dad could shed light on that switch.

It may have been a major contributing factor in the development of a devastating backhand, often considered one of the best of all-time, and one that was hit in the fashion of a true man, one-handed. On the minus side, however, it could be said that switching hands resulted in a serve that was almost laughable by any standards.

His fellow competitors gave him the moniker of “Muscles,” in that time-honoured tradition of devising nicknames that were basically the opposite of the person being described. Ken Rosewall’s lack of impressive musculature, however, was compensated with speed, agility and a level of endurance that was across-the-border-line in its level, keeping in mind, also, that men’s tennis matches were generally best-of-five-set affairs and that sets were played until one player achieved a two-game advantage.

There Were No Tiebreakers

Perhaps the most remarkable thing about Rosewall’s career, and something that could possibly be attributed to the lack of bone and connective tissue injuries experienced by today’s hyper-developed athletic musculatures was the fact that he was injury free throughout his career and was still playing at a highly elevated level as a 40 year-old.

A detailed examination of Ken Rosewall’s results would prove exhausting and is beyond the scope of this article. It is further complicated by the fact that there was no unified sanctioning body for tennis throughout most of his career. There was first the distinction betwixt amateurs and professionals. Amongst the professional ranks, the rivalry was such that being associated with one tour might disqualify a player from playing in certain events.

It was essentially 1971, by which time Rosewall had been a professional for 15 years, that the modern or Open Era ushered in some semblance of universal entry in all tournaments for all qualified players.

Here Is A Brief Rundown Of His Results

His match record during the Open Era stands at 550-175. He won 133 titles, including 35 listed by the ATP. His highest ranking was number 2 in 1953, although there were several years where his fellow competitors acknowledged him as the best, blokes by the name of Rod Laver, John Newcombe, Pancho Gonzales, Tony Trabert, and others.

What should not be overlooked regarding Rosewall is that to go along with his eight Grand Slam Singles titles, he matched that with eight Grand Slam Doubles titles. Three times in the Australian Open, two in the French Open and two in the U.S. Open, Rosewall and his partner were triumphant. Wimbledon did not escape him, as it had in singles. That title would come to him twice.

By way of summary, it should be said that Ken Rosewall spent 25 consecutive years ranked in the top 10, from 1952 until 1976. That sort of accomplishment is basically inconceivable in almost no sport other than golf, and most people would have no argument that tennis is the more physically demanding. In tennis, a 25 year career is no longer in the realm of possibility.

Ken Rosewall shall always be remembered as the average man’s champion. He proved conclusively that it does not require exceptional size or strength to compete at the highest level and that perseverance, tenacity and mental toughness can more than overcome below average physical characteristics.