Perhaps it was something in the water, or there could have been other reasons why Australia produced not simply proficient but outstanding tennis players who rose to prominence and world dominating performance levels during the 60s and 70s, with names such as Laver and Rosewall on the tips of the tongues of just about anyone with the slightest level of tennis consciousness at their disposal, but regardless of the reason or reasons, that discussion would not be complete without the inclusion of one John David Newcombe.

John Newcombe was born on 23 May 1944, heady times for a country that was beginning to breathe a collective sigh of relief over the diminishing threat of a credible invasion by the Japanese Empire. His place of birth was Sydney, a city of charms sufficient to remain his home at this stage of his life. 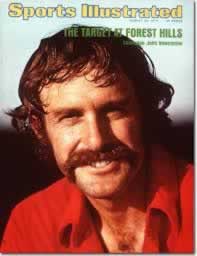 He entered the professional ranks in 1960 at the tender age of 16 and devoted the next 21 years of his life to compiling an enviable record that included number one world rankings in 1967 and 1974, along with a winning percentage, over the course of almost 600 matches, of close to 76 percent. His seven Grand Slam titles somewhat pales in comparison to some of the current and recently retired crop of tennis players, but it is imperative to mention that Newcombe also took part in over 400 doubles matches, a number that would take a combination of some number of today’s prima donnas and then some to equal.

John Newcombe played and enjoyed his greatest success during that period of time when there was a certain degree of turmoil surrounding which players were eligible for what tournaments. He was at the end of his career when the true open era was finally established in the early part of the 70s.

He compiled a match record of 429 wins against 136 defeats and this was in those times when some of the true giants of the game regularly battled for supremacy, and winning a regular tournament, let alone one of the majors, meant that beyond the first and second rounds, it was highly likely that a formidable opponent such as Rod Laver, Roy Emerson, Ken Rosewall or Tony Roche would be encountered.

That is just some of the Australian competition Newcombe faced. Other notables who would have figured into the mix would have been a Pancho Gonzales in the twilight stages of that player’s career, Stan Smith, Arthur Ashe and an up-and-coming young Jimmy Connors.

The French Open was the one major title that eluded him; in fact he never made it past the quarter finals, going that far only twice, in 1965 and 1969. It would be tempting to assume that clay courts were not his bailiwick, but as we will see later when we examine his doubles results, he was proficient enough to win the French title three times.

Newcombe was obviously up to the task in vast measure when the surface turned to grass. He won Wimbledon thrice. In 1967, he for lack of a kinder term, wiped up the court with a German player named Wilhelm Bungert, losing only five games in the course of a straight set victory. It was much closer in 1970 when it was Ken Rosewall participating in an all Australian men’s final that went to a full five sets.

John Newcombe lost the first set 5-7 before recovering to take the second at 6-3 and the third at 6-2. It was then Rosewall’s turn to stave off defeat by trouncing Newcombe in the fourth by the score of six games to Newcombe’s three. Newcombe then turned the tables and lost only one game in the fifth to secure the title. In the fourth round of that year’s Wimbledon, Newcombe won in straight sets over American Dennis Ralston, but in the days before tie breakers were utilised, he needed 14 games to win the first and twelve to win the second before Ralston surrendered rather meekly in the third, 6-2. Newcombe beat countryman Roy Emerson in the quarterfinals and the legendary Spaniard Andres Gimeno in the semifinals in order to set up his showdown with Rosewall in the final.

John Newcombe was to repeat the following year, disposing of Rosewall in the semifinals, where even though he went in ranked as the second seed to Rosewall’s third, he made short work by winning 6-1, 6-1, 6-3. It was the literal giant Stan Smith extending Newcombe to five sets, with Smith having a chance to take the title in the fourth set that ultimately went to Newcombe at 6-4. The tense fifth set was also decided by the same score, 6-4.

We will dispense with the customary disregard for today’s players who would not play doubles even if there were two balls in play at the same time that has been mentioned adequately in other articles concerning great Australian tennis players.

John Newcombe accomplished much when paired with another man and he also was not too proud to compete in mixed doubles. He has 17 majors to his credit beginning with a Wimbledon and Australian Open title in 1965 and concluding with a final Wimbledon Doubles title in 1974. That total includes six Wimbledon’s and five Australian Opens, three French and U.S. Opens.

His two major mixed doubles victories were the Australian in 1965 and the U.S. Open in 1964.

After calling it a day in 1981, having reached his zenith a number of years earlier, John Newcombe was inducted into the Sport Australia Hall of Fame in 1985. The following year, he went into the International Tennis Hall of Fame.

As evidence of the growth of the sport at the professional level, his career earnings of a bit over $1 million represents not a 21-year career such as Newcombe had, but one major victory.

Tennis fans will remember him for his tactical skills, and his serve-and-volley prowess on grass. Sometimes forgotten is that he also possessed one of the better second serves, earning him many aces when most players are simply hoping to get a second serve in and avoid disaster.

Not to be overlooked, either, was that John Newcombe had perhaps the best mustache to ever appear on the professional tennis circuit.