He hopes to be at his peak for the Brazil Games in Rio de Janeiro in 2016. 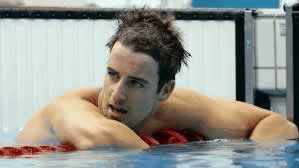 James Magnussen, known as The Magnet, The Missile, or simply Maggie was born 11 April 1991 in Port Macquarie, New South Wales. He currently resides in Sydney, where he competes and trains under current coach Brant Best as a member of the Sydney Olympic Park Aquatic Centre, the site of the swimming and diving, water polo and swimming portion of the pentathlon during the Sydney Games in 2000.

He stands just less than 2 metres tall and weighs in at 90 kg. His specialties are the 100 and 200 metre freestyle. He also swims the 50 free.

James Magnussen seems to be part of a trend that is not all that old, given the long tradition of Australian swimming and that of swimming in general, of specialisation where swimmers no longer attempt to master every discipline. This is not intended as criticism of him, or anyone else for that matter. The training and diligence necessary to perform at top levels in swimming is so intense that it makes much sense to focus on one’s strengths rather than expend a lot of energy trying to compensate for one’s weaknesses. James Magnussen seems to have as near to ideal a physique as could be imagined for the freestyle; it would be pointless for him to bother with other strokes, most especially the butterfly or the breast stroke.

In all objective honesty, the financial opportunities for a swimmer are limited mainly to sponsorships and endorsements, and the fan base favours the freestyle, so if you intend to spend hours in the water training, hours out of the water cross-training and essentially devote every waking moment of your life to training and competing, you might just as well give sponsors and the public what they want.

On the big stage, the one that leads to Olympic qualification and international competition, James Magnussen was first brought to the attention of swimming world in the 2010 Australian Swimming Championships in Sydney. As well as serving to determine Australian Champions, they were also used to determine qualification for the 2010 Commonwealth Games and the 2010 Pan Pacific Swimming Championships.

A young (19 yrs) James Magnussen made his way onto the national team by placing third in the 100 metre free with a time of 49.43.

In the Pan Pacific, he teamed with relay members Eamon Sullivan, Cameron Prosser and Kyle Richardson to win silver medal honours behind the United States. He swam the anchor leg and turned in a time of 48.25. In the individual event, he could do no better than 10th with a 48.94, even though he bettered his qualifying time by more than half a second.

Not long after, at the Pan Pacific Swimming Championships, James Magnussen again joined the relay, with the exception being that Tommaso D’Orsogna was in the spot occupied by Cameron Prosser in the Pan Pacific meeting. The four took the gold in the 4 x 100 metre freestyle relay, turning in a combined time of 3:13.92.

The relay that followed, the FINA WSC, held on a 24 metre course in Dubai, did not produce a medal, but a fifth place finish.

The following year, James Magnussen took the top spot in the 2011 ASC in the 100 metre free, lowering his time by another 65 one hundredths to 48.29. To put that time in historical perspective, Tarzan (Johnny Weismuller) himself set a world record at 58.6 in 1922, over 10 seconds slower than Magnussen, yet Weismuller was handsomely rewarded with a lucrative movie and TV career, an attractive mate named Jane, an adopted son named Boy and a chimpanzee named Cheetah.

At the 2011 Worlds in Shanghai, Magnussen won two golds for the 100 metre free, the 4 x100 freestyle relay, along with a silver in the 4 x100 medley. Swimming the freestyle leg of the medley on the last night of the competition, he posted a 47 flat, by far the fastest in the water, almost enabling the Australians to overtake the United States.

Next up was the 2012 ASC, which during an Olympic year served as the qualifier for the Olympic team. In the 100 metre free, James Magnussen turned in a 47.10 and bested his nearest competitor by over half a second! This competition was where Magnussen chose to unveil his new tactic of going out hard in the first 50 metres instead of relying on his incredible kick. He also lowered his personal best in the 50 metre freestyle.

At the 2012 London Olympic Games, Magnussen managed two medals, one silver and one bronze. The Australian team was considered the favourite in the 4 x 100 metre freestyle relay, but they came in fourth behind France, Russia and the United States.

In Magnussen’s signature event, the 100 metre freestyle, he swam his best in the final only to discover at the end that he had lost by one-hundredth of a second to Nathan Adrian of the United States.

There were at the games some murmurings of discordance betwixt James Magnussen and his teammates to the effect that some team members had issues with Magnussesn’s behaviour and actually expressed satisfaction over his second place finish in the 100 metre free. That would hardly be the Olympic, or the Australian spirit for that matter, on display and whether justified or not, a rather dismal lack of sportsmanship. The spirit of Weismuller could possibly have been heard to say, “Tarzan no like that!”

Magnussen defended his World title at the 2013 Worlds in Barcelon and also mustered, with his teammates, a silver in the medley relay.

He was back in the pool four days after the conclusion of Worlds for the 2013 FINA World Cup. He took first in the 100 metre free, turning in a 45.60 to take the victory over Vladimir Morozov.

Swimming records of James Magnussen’s era require an asterisk due to the appearance of bodysuits made out of polyurethane or other non-textile materials. Magnussen holds an unofficial world record for fastest 100 metres in textile and the fastest 50 metres in textile.