He was a Thoroughbred horse that was sired by Valais and his dam was Chersonese. Both of his parents were from Great Britain. His grandsire was Cicero and his brother was Thracian, who was a great sire of many stake winners. 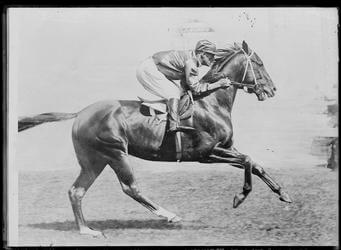 His first stakes win was at the AJC Breeders plate over 5 furlongs in 1923. Next up was a win for him in 3 more stakes: the VRC Ascot Yale Stakes, which was over 6 furlongs, the VRC Marbymong Plate and the AJC Champaign Stakes.

In the next season, he had yet another great season, with 3 stakes wins and later on. After having had his merits disqualified (after his co-owner, trainer and jockey failed to allow his stable mate to run using his merits), Heroic could not participate in the Australian Derby and the Melbourne Cup.

The responsible people were banned for 12 months. Due to his great potential, he was bought by Mr C. Kellow for a record fee of 16,000 guineas.

He won the Chelmsford Stakes, in which he defeated Gloaming, was victorious at the VATC Caulfield Guineas and at the 1924 AJC Australian Derby over 5 furlongs.

In the 1925-26 season, Heroic carried on from where he had left the previous season and managed to win 4 races from 18 starts.

Even though he was very successful on the track, Heroic was bad-tempered and was often unpredictable. For example, in 1925, at the All Aged Stakes, he refused to obey the orders given by the starter.
Heroic ran his last season as a 5 year old in the period of 1926-27.

His wins came at the Williamson Underwood Stakes (over 8 furlongs), the weight for age WS Cox Plate over 10 furlongs and the VATC Memsie Stakes where he carried 9 stone 11 pounds over 9 furlongs. At the start of the New Year, Heroic won the MVRC William Reid Stakes over 6 furlongs.

Heroic also won the VRC King’s Plate. The 1926-27 season, Heroic was visibly growing tired and he retired after failing to be placed in four consecutive starts.

In his retirement, Heroic was sent to Tarwyn Park Stud in New South Wales. The horses he sired won 110 major stakes and earned a total of £293,849. He was voted leading sire in Australia seven times between 1933 and 1939.

Some of the 29 stake winners he sired include: the great Ajax II who won 18 consecutive races and had won 31 stakes by the time of retirement, Gallantic who won 2 stakes, D’Artgnan (winner of the WATC Sires’ Produce Stakes among other races, Cereza who won the AJC CW Cropper Plate two times, Hall Mark who won 15 stakes, Heroic Prince, Heros who won the William Reid Stakes two times, Herolage who won the Brisbane Cup and the QLD Tattersall’s Cup, Nuffield, The Mane, Heroic’s Double, Hua and Valiant Chief who won the Linlithgow Stakes, Moonee Valley Stakes, the VRC C.M Lloyd Stakes and the VATC Memsie Stakes.