Adam Scott may eventually eclipse Norman’s marks for career Major titles, but as much as we like the young man from Sunshine Coast, it is relatively safe to say that in terms of wins around the world, career longevity and the constant attacking, go-for-broke playing mentality that made Norman’s play on the golf course gasp-inducing, there is not much basis for comparison. 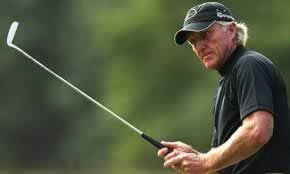 Greg Norman was deriving income from golf, making him technically a golf pro, as an assistant pro at the Beverly Park Golf Club in Sydney. He was 20 years old at that time, earning $38 per week for working in the pro shop. He had started playing golf only five years earlier, having focused on rugby and cricket when he was younger. He was also very interested in surfing.

One interesting aspect to Norman’s golf ability is that he is a natural left-hander. He learned to play right handed, and any other left-handed golfers out there from this time period know that the primary factor behind this switch was the dearth at that time of left-handed golf equipment, which in no way diminishes the challenge of switching sides.

Greg became a touring professional in 1976, winning for the first time at the West Lakes Classic in Adelaide. He joined the European tour the following year and soon won the Martine Classic in Scotland.

Norman compiled an impressive resume, decimating competitors and shooting record scores over the next three years. He would win the first of his five Australian Open victories that same year.

He made his debut in The Masters in 1981, coming up three strokes shy of winner Tom Watson to finish a respectable fourth and attracting the attention of the golf world. Similar results followed in 1982. Norman took the crown for winning the most money on the European Tour, winning three times and again leaving the field in his wake on more than one occasion. These results were sufficient for Greg Norman to consider himself up to playing on the PGA Tour in 1983.

He very nearly won Arnold Palmer’s tournament, the Bay Hill Classic, by chasing down Mike Nicolette, erasing that golfer’s five shot lead. He could not close the deal, however, and his aggressive style played a role when Norman blew a 30-footer well past the cup on the first playoff hole, permitting Nicolette to win with a relatively routine par.

1984 was to be the year of Greg Norman’s first PGA Tour victory, the Kemper Open, where he strolled up the final fairway with a five-shot cushion. The following week, in what would seem to be the pattern for his career, Norman dramatically forced a playoff against Fuzzy Zoeller in the U.S. Open, but he performed dismally in the playoff, losing by eight strokes over 18 holes. He was triumphant soon following in winning the Canadian Open, then lost another playoff in the Western Open, this time to Tom Watson.

The following year produced good play with two wins in Australia and two runner-up results on the PGA Tour.

Greg Norman was in 1986 to contribute his name to a somewhat, mildly at least, dubious distinction when the term Normal Slam was coined to describe the fact that he went into the final round of each of the four Major PGA tournaments leading after 54 holes.

From the four opportunities presented by playing the final round in the last group, he secured the victory in only the British Open, although it is borderline disrespectful to say “only,” in conjunction with winning a Major, and is possible only because Norman’s stellar play in the other three put him in position. Another victory earlier in the season, this one being his second win at the Kemper Open, provided what would turn out to be an ominous premonition of the future. It required six extra holes for Norman to secure the victory over Larry Mize.

The PGA, the last Major of the season, supplied a foreshadowing. He was in the lead at the beginning of the final round, but shot a dismal final round 76, to be caught by eventual winner Larry Mize, who holed a bunker shot on the 72nd hole. After the tournament, Norman was rather philosophical, admitting that if he had been able to shoot even par, Mize’s heroics would have been moot. Still, it would have had to have been a bitter pill, especially considering that not since Bobby Jones in 1930 had anyone been in the position Norman earned in the Majors of 1986.

The drama ascended to its ultimate conclusion in The Masters in 1987. Norman found himself tied for the lead on the final hole. He had a 20-foot putt for birdie and the outright win, but the ball defied gravity and refused to fall into the cup. The playoff that followed featured Norman, Seve Ballesteros and Larry Mize. Ballesteros bowed out on the first extra hole. On the next hole, Norman gave himself a birdie opportunity and stood next to the green as Mize surveyed a chip from the right-greenside rough from close to 45 metres away. It was the sort of shot that even the most adept chipper would ever even consider as a possible up-and-down.

Norman was still standing there, quite possibly contemplating the very real possibility of needing only to two-putt in order to be the first Australian to don the Green Jacket.

In that short span of time, he went from that thought to the wholly unanticipated one of needing to make a longish birdie putt to simply stay in the tournament when Mize chipped in against all probability to deny Norman his deserved victory and gain a measure of revenge for the playoff loss to Norman in the Kemper Open.

The next several years were more or less typical for a touring professional. Norman had some good results, along with some injury issues. He continued to be a force on the PGA Tour and a legitimate contender any time his name appeared on roster. He had been a mainstay on the Tour for close to 20 years when he won his second and last Major, again The Open, this one at Royal St. George’s Golf Club in England in 1993. Some of golf’s greatest names witnessed the amazing final round 64. One of the Immortals, Gene Sarazen, was quoted as saying, “I never thought I would live to see golf played like this.” Norman’s playing partner for that remarkable round, Bernhard Langer, called it the finest round he had ever witnessed.

1995 was a stellar year for Greg Norman. After playing at a consistently high level all season, it was he this time that provided the lightning-in-a-bottle moment when he chipped in to defeat Nick Price in the first playoff hole of the NEC World Series of Golf. He was that season’s top money winner, the third time he had managed that remarkable feat, and he was named the PGA Player of the Year. He also ascended to the Number 1 World Ranking, a distinction he would enjoy for 331 weeks, over six years, in other words.

1996 was to provide the stigma that can never be erased, not even by someone of Greg Norman’s stature in the annals of golf. Leading by six strokes going into the back nine on the final day of the 1996 Masters, Norman supplied a collapse that will never be forgotten and only the recent Masters victory by Adam Scott was able to expunge the stain on the collective psyche of Australian golf fans.

His final wins on the PGA were to come in 1997. Those were the FedEx St. Jude Classic in late June and the NEC World Series of Golf in the latter part of August. That year also featured the emergence of Tiger Woods. Norman’s fellow countrymen Steve Elkington and Stuart Appleby were also posting wins and acceptable results.

Despite coming from a country that has produced more than a fair share of competent golfers, Greg Norman is in a class by himself. He is credited with 90 professional wins, which places him in the rarefied atmosphere occupied by names such as Sam Snead, Arnold Palmer, Jack Nicklaus and Tiger Woods. Twenty of those victories came on the PGA Tour, 14 from the European Tour and his 31 wins on the PGA Tour of Australasia rank him third all-time for that circuit. Only those with 20 or more PGA Tour wins need bother mentioning the level of competition and lest any of those feel inclined to sneer at the European Tour might be well advised to take a look at Ryder Cup history.

Greg Norman became eligible for the senior PGA Tour in 2005, but other interests and years of accumulated golf injuries put a damper on his interest in competing further. He did make an impression in 2008 with a strong showing at the Senior PGA Championship. He also acquitted himself admirably in Senior Majors and in the 2008 Open Championship.

The record of his career accomplishments is far too lengthy to detail here. Suffice it to say that he won the most money, had the highest ranking and provided enough drama to last a lifetime or more than one occasion, making him the undisputed greatest Australian golfer of all-time.