Grant Hackett: There are some close to the subject who lament that Australia’s days as a dominant force in the sport of swimming are things of the past.

Times have changed and swimming training methods have as well. In days gone by, parents would toss youngsters into the surf, and those that managed to out-swim the Great Whites were earmarked as potential Australian Swim Team members. Those that could not were encouraged to choose another sport. 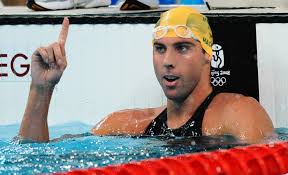 As recently as this year of 2015, one of the greatest the country has ever produced attempted a startling comeback at the age of 35 after a six-and-a-half year hiatus from major competition by qualifying for the 2015 World Aquatics Championships, where he won two bronze medals at an age when most swimmers have been dry for at least a decade, if not longer.

We are writing, of course, about Grant Hackett, who with three Summer Olympic Games and six World Championships to his credit, left many a Great White gasping for oxygen, or whatever it is for which gilled creatures gasp, in his wake.

Grant George Hackett was born 9 May 1980 at Southport on Queensland’s Gold Coast. His older brother Craig was also an outstanding competitive swimmer until he got the idea of after finishing a nice, brisk 2.4 mile swim, he would tack on riding a bicycle for 112 miles, and then go for a little 26-mile jog, just to get all the muscle groups involved.

Grant Hackett experienced his first notoriety at the 1997 Pan Pacific Championships, where he won the event that would come to define him, the 1500 metres. He also won the 400 metre freestyle as well, beating none other than an emerging Ian Thorpe. He was showing the ability as a 17-year-old that made him the perfect candidate for the upcoming 2000 Sydney Summer Olympics.

He duplicated his 1500 m in the 1998 Perth World Championships and also played a role in the 4 x 200 m relay, where over the course of the next six years, Grant Hackett and his teammates held a virtual stranglehold in the event at the expense of the Yanks. Where the 1500 m freestyle was concerned, he himself had a personal stranglehold that defies comprehension. He won the event at every significant world championship meeting from 1997 – 2007!

He broke a world record for the first time in 1999, in a sprint event, the 200 m. Later that year, he lost the record to Ian Thorpe in the Pan Pacific Games in Sydney, even though he beat his previous world record time.

Grant Hackett had the misfortune of contracting a virus at precisely the wrong time for the Sydney Olympics in 2000. He was labouring so severely that he was dropped from the rotation for the 4 x 200 m relay. Toward the conclusion of the Games, where marquee events such as the 1500 m are slotted, he had recovered enough to qualify. He abandoned his customary tactic of pacing to reserve energy for the final kick and went out hard in the final, where he managed to hold on and claim the gold medal.

He was in top form at the 2001 World Championships. He won silver in the 400 m and 800 m freestyle, pushing Thorpe to the limit, bettering the world record in the 800 m, even though finishing second. Swimming with, rather than against Thorpe, the Australian team, including Bill Kirby and Michael Klim established a new world record.

He also won the 1500 m in world record time, beating the old record by seven seconds in 14:34.56. To put that achievement in context, Grant Hackett swam 100 metres in under one minute 15 times consecutively. The current world record for the long course 100 m is right at 47 seconds, not that much faster than Hackett’s average per hundred metres over 1500 m.

Grant Hackett did well in 2002 by anyone’s standards but his, so much so in fact, that his accomplishments in 2003 at the World Championships in Barcelona almost seem underwhelming. Swimming competitions at the top level often require a swimmer to swim at least one qualifying heat to get into the final. Hackett did just that, and then took medals in all five of his events, a bronze in the 200 m, silver in the 400 m, and gold in the 800 m, 1500 m and 4 x 200 m relay.

His 1500 m gold medal in the 2004 Athens Olympics reads like something of a movie plot. As in 2000, he was not at his best when the 1500 m final jumped. Nothing serious, just a partially collapsed lung. Proving that the need to breathe whilst swimming is overstated, he won the race, beating swimmers six years’ his junior.

Grant Hackett added another five medals to his tally at the 2005 World Championships in Montreal: one bronze, one silver, and three golds.

Shoulder surgery derailed him at the end of 2005, preventing him from taking part in the 2006 Commonwealth Games. Later that year, he moved from Sydney to Melbourne, thinking that his future prospects as a competitive swimmer looked dim. He returned for the 2007 World Championships, where nothing other than a silver medal in the 400 m was his. He was beaten, convincingly, in the 1500 m, where he finished seventh.

In what would seemingly be his swan song, he made the Australian team for the 2008 Beijing Olympics. A disappointing sixth place finish in the 400 m was an ominous portent. The Men’s relay team could do no better than bronze. In the 1500 m, however, Hackett rose to the occasion to win silver, needing only about seven seconds longer that he had required when he set the world record.

Next followed the aforementioned swimming hiatus that brings us up to the 2015 World Championships. He took bronze in the 400 m.

As of this writing, Grant Hackett still holds the short course world records for the 800 m and 1500 m freestyle events. Those records stood up even when the introduction of the polyurethane full-body suits threatened to render earlier records meaningless.

Many Honours During Career