His career was very brief, but also very brilliant. He was a Thoroughbred horse that was foaled in 1877 and sired by Yattendon.

He was bay in colour and won 9 times from 9 starts, earning £ 8, 105.
He was owned by William Long and trained by Tom Brown. Grand Flaneur was bred by Edward Cox in New South Wales. His dam was First Lady from Great Britain, while his damsire was St. Albans. 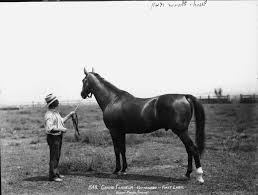 He was outstanding for his performance, which was an amazing combination of stamina and speed; a rare characteristic in most racehorses. Grand Flaneur had a girth measuring 5 feet, 10 inches. He was undoubtedly one of the greatest weight-for-age (w.f.a) horses to have set foot on the Australian horse racing scene.

He is believed to have inherited his top speed from the genes of his damsire, First Lady. It is also worth noting that by the time he retired to stud, Grand Flaneur had not lost a single race and it is widely speculated that he could have broken several records if he had gone through his career without being plagued by the bad injury that sent him into early retirement.

He was raced in black and white and his jockey was Tom Hales, who was arguably the best jockey at the time. Grand Flaneur was a participant in a number of classic races and was up against some of the best horses that had mastered handicap races; but he was still able to overcome this competition and win.

Grand Flaneur won six principal races within a span of one year. He started racing at the age of two with a win at the five furlong sprint, the VRC Normanby Stakes. He won the race by half a length. He did not race much as a two year old and less than a year after his first win, he went on to win the AJC Derby, which was over 12 furlongs.

Next up, it was a succession of wins for him, as he also won the AJC Mares Produce Stakes held the same year by 1-1/2 lengths over 10 furlongs.

Next up, he was victorious at the VRC Mares Stakes Produce over 10 furlongs and then won the Melbourne Cup by one length over 16 furlongs. During the early stages of the lead up to the Melbourne Cup, the odds were against him, with pundits putting a 4/1 in favour of Progress, who ended up finishing second.

Grand Flaneur was not done yet, as he went on to win the VRC Town Plate by a length and the VRC St Leger Stakes held in 1881 by 1-½ lengths. He was also the winner of the VRC Victoria Derby which was over 12 furlongs and the VRC Champion Stakes over 24 furlongs which was yet another 1 length victory.

His win at the Melbourne Cup was in front of a huge crowd of spectators estimated to have been more than 100,000 people. The win was also his rider’s (Tom Hale) only career win at the race and it is believed to have won owner W.A Long about £ 20,000 worth of total wagers, far in excess of the horse’s career prize money.

A serious suspensor ligament injury in a track gallop forced Grand Flaneur into early retirement where he set an impressive stud record. He was sent to the Hobartville Stud in New South Wales where he sired a total of 23 horses that went on to be future stakes winners.

Out of the 23 stakes won by the horses he sired, 13 races have since been upgraded to Group one (G1) status. Some of their wins were at the AJC Epsom handicap, which was won by Hopscotch, AJC St. Leger Stakes, the Melbourne Cup (won by Patron and Bravo), GB Ascot Gold Cup that was won by Merman, who was sired in 1900, AJC St. Leger Stakes and the GB Goodwood Cup.

His most notable offspring was Bravo, who was from his first crop and who won the Melbourne Cup. Apart from Bravo, He also sired Frisco who won the Sydney Cup. His other offspring were Corday, Chesham, Hopscotch, Lord William, Dainty and Maecenas. Grand Flaneur’s 23 stakes winners won 45 stakes and brought in earnings, in excess of £ 50,000.

Following his successful stint on the racecourse and the subsequent success at siring many stakes winners, Grand Flaneur was honoured in 1895 by being named the Leading Sire in Australia during that period.

However, Grand Flaneur had a host of difficult moments upon his retirement to stud. He reportedly suffered from rheumatic attacks, a situation that was made worse by the prevailing extremely cold weather. Because of the situation at Hobartville, Grand Flaneur had to be taken to Chipping Norton in attempting to stabilise his condition.