Gloaming was one of the greatest racehorses to have step foot in Australia. He started 67 times, out of which he won 57 races and finished second 9 times, with earnings totalling £43,100.

This gelding stood at only 15 hands and 3 inches and was sired by The Welkin from Great Britain and his dam was Light, also from Great Britain. His grandsire was Flying Fox while his damsire was Eager. Gloaming came into Australia from New Zealand, having been bought at a price of 230 Guineas in 1916.

He held two major records at one time: 45 seconds over 4 furlongs and the joint record of 19 consecutive wins with Black Caviar and Desert Gold. Gloaming was also the first horse to beat the legendary Desert Gold over his 1-mile specialty. 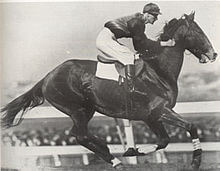 His performance was exemplary, especially considering the fact that his height stood at just 15.3 hands. However, despite his small height, Gloaming was very versatile and he could make strides that were as long as 25 feet.

During his entire career, Gloaming was unplaced only once. He was also among the five racehorses that were the very first to be inducted into the New Zealand Racing Hall of Fame. Other inductees included Phar Lap, Carbine, Sunline and Kindergarten.

Gelding started racing as a three-year-old in the year 1918 with a record win in Sydney at the Chelmsford Stakes. He was the first three-year-old to have won the race as a starter; and he did it in record time.

On that day, he defeated two five-year-olds who had been tipped as favourites; Kennaquhair and Rebus. After the good start, Gloaming went on to win three major races: the New Zealand Derby Stakes, the AJC Australian Derby and the Great Northern Derby.

During his debut season, he also had eight wins in other races. These wins were at the Wellington Stakes, where he set a new record, the WRC Champion Plate, the ARC Islington Plate, Wanganui Jackson Stakes which was a weight-for-age (w.f.a) stakes, Wanganui Guineas, CJC Challenge Stakes and the Egmont and Hawera Stakes where he defeated the legendary Desert Gold on both occasions.

During the same season, Gloaming was second in the G.G Stead Memorial Stakes and unfortunately fell in the North Island Challenge Stakes later in the season.

Gloaming won six races and finished as runners-up once. In the AJC Craven Plate, he defeated a strong field of champion horses to win over the 10 furlongs.

He also emerged victorious in the weight-for-age (w.f.a) Rosehill Spring Stakes where he defeated Prince Viridis and Walaroi and then went on to win in New Zealand at the Wellington Champion Plate, which was yet another weight for age win for him.

Gloaming also went on to win the G.G Stead Memorial Gold Cup, where he defeated Desert Gold once again. He was not done yet, as he won the Islington Plate and the ARC Royal Park Stakes, which was again another record-breaking win for him. Gloaming’s only “disappointment” during this season was his second place finish at the AJC Spring Stakes.

Gloaming’s third season was even more spectacular as he won all 15 races in which he participated. He won the ARC Auckland Plate, the CJC Challenge Stakes, the w.f.a WangJC Jackson Stakes and the TaraJC Taranaki Stakes. In total, Gloaming won six major titles as a five year old.

In the season that followed, Gloaming continued with his great form, winning another six major races. He was victorious at the ARC Auckland Plate (1922), won the WRC North Island Challenge Stakes, the CJC Challenge Stakes; set a race record at the WangJC Jackson Stakes and also won the HBJC Ormond Memorial Gold Cup.

During this season, Gloaming was runner-up on two occasions.

The 1923-24 season was relatively successful for Gloaming, as he utilised his five starts to come out victorious in four races. He was placed second once. His principal wins came in the 1924 WeRC North Island Challenge Stakes and the WangJC Jackson Stakes held the same year.

As a nine-year-old, Gloaming was still very strong and versatile enough to win seven principal races from the ten starts he made. In 1924, he won the VRC Melbourne Stakes and the AJC Craven Plate; where he defeated Nigger Minstrel and David, who had also been tipped as potential winners.

At the end of the season, Gloaming defeated The Hawk to win the 1925 HBJC Ormond Memorial Gold Cup. Gloaming retired in 1925 and was honoured later on when the G3 (Group Three) race at Rosehill Gardens Racecourse was named after him. This race is known as the Group Three Gloaming Stakes and it covers a distance of 1800 metres.