There is an old adage that says, “Those who can’t do, teach.”

Whilst this adage may have an element of truth to it, especially since it is often the case that those with an exceptional level of talent at some endeavour are often unable to efficiently transfer their abilities to a protégé, and that the best teachers frequently possess only modest abilities in their chosen field of instruction, the underlying assumption of the adage is that the teachers and the students are both of the same species.

A strict application of the adage would seem to preclude great thoroughbred jockeys from teaching new jockeys to steer racehorses with the same level of success they themselves enjoyed, or great trainers being unable to groom someone to follow in their footsteps at anywhere near the same level of productivity when it came to developing winning racers, but what about a great jockey going on past his days in the saddle to teach horses to be great racers? 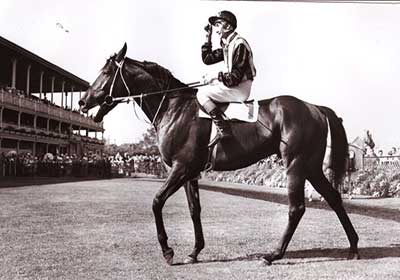 A man who made this transition, perhaps better than has ever been seen in the history of Australian thoroughbred racing, was one George Donald “Cotton Fingers” Moore, who took his first ride in 1939 in Brisbane.

Over 30 years later, he would make the switch to trainer, where over the course of the years betwixt 1973 and 1985, he would win trainer’s premierships eleven times in Hong Kong after training stints in France and Australia.

On top of his prodigious accomplishments as a rider and a trainer, however, George Moore would defy the adage and have a son, John Moore, who set records for wins as a trainer, and another son, Gary Moore, who would prove a more than adequate jockey, including a 1981 win in France’s premier race, the Prix de l’Arc de Triomphe that his father George had won in 1959.

Moore started his career as a jockey as an apprentice to trainer Louis Dahl. It took him five years only to reach the stage at which he was able to claim his first Sydney jockey’s premiership in 1943. That accomplishment served as the impetus for Moore to seek fame and fortune at the bigger stage represented by racing in Sydney.

He continued his good form for the balance of 1943 and part of 1944, where he was said to be capable of coaxing the maximum effort from his mounts. Some observers felt that he almost possessed a telepathic, “horse whisperer,” ability that permitted him to use his hands to both detect a horse’s form and capabilities and to those his hands to tell the horse how to run in response to the situation. That extra sense was the source of the nickname Cotton Fingers.

Regardless of what accounted for his abilities, Moore would over the course of his career average close to 70 victories every year, which is remarkable in an era before the number of events exploded to the present level. His total victory count was almost 2,300. One hundred nineteen of those victories would be in races that would eventually be classified as Group 1 quality.

Roy Higgins retired 11 victories short of that mark. Damien Oliver, trailing by 19 and Jim Cassidy at 95, are the only two jockeys within sight and both won in 2014, but both will require some exceptional good fortune to catch Moore. Glen Boss, with 78 Group 1 wins, is the only other active jockey anywhere in proximity.

In terms of major Australian wins, it is much simpler to mention the two races where Moore failed to win: the Melbourne Cup and the Caulfield Cup. The other big races fell to him multiple times, including two Cox Plates, three Sydney Cups and five Australian Derbies. He would also notch important victories in Europe and America.

Consistency and expertise such as Moore was showing played no small role in his gaining the right to ride the New Zealand horse that is mentioned as one of the three greatest racehorses in the history of Australian racing, Tulloch. That was without doubt his most significant mount and Moore would do the honours in 19 of that immortal thoroughbred’s 36 wins.

When he retired from riding in 1971, he had 312 metropolitan stakes to his credit.

There can be no doubt that at least a little bit to T.J. Smith’s training acumen rubbed off on George Moore. He set a record for most wins by a trainer in Hong Kong that stood until Brian Kan eclipsed him before retiring in 2003. George Moore would live to see his son John reclaim the record for the Moore name in 2005 and at the end of 2014 John had almost 1,400 victories under his belt.

Betwixt father George and sons John and Gary, they could be said to be largely responsible for the growing reputation of Hong Kong racing. It would appear that our adage pertaining to the inability of doers to be teachers is woefully inadequate where the case of George Moore is concerned.

George Moore retired completely from the racing industry after the 1985 season, where at the age of 62, he had spent more than two-thirds of his life around thoroughbred racing.

He received numerous other honours, including a race held at Doomben racecourse and in the year prior to his death in 2008, a commemorative postage stamp.

Some athletes achieve fame for their accomplishments, some for their longevity and others for combining those two elements. George Moore certainly falls into that third category, with his record in major races seeming to be his most impressive credential, but his contributions after he had hung up his spurs cannot be discounted, especially in light of the major impact that he and his sons made on horse racing in Hong Kong.