She was a sister to the legendary Sky High and was bought in the year 1942 at the Sydney yearling sales for 60 guineas at an auction by former AJC chairman, Brian Crowley

The AJC Flight Plate is an annual G1 race which is ran over a distance of 1,600 named in her honour. She was sired by Royal Step and her dam was Lambent from New Zealand.

During her career, she started 65 races, won 24 times, came in second 19 times and was placed third 9 times. 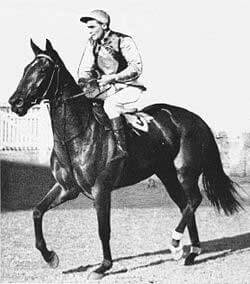 She earned £ 31 429 over the six year period during which she raced. Flight had a very big girth measuring 73 and half inches, something that clearly gave her the extra power and ability to win major races. Her consistency in racing won her many admirers and she was inducted into the Australian Racing Hall of Fame in 2007.

Her prowess on the racing track brought her a lot of admiration, culminating in the naming of one of the G1 races after her. The A.J.C Flight Stakes were named after this great champion. Flight’s great fetes did not just end at the racing track. Upon her retirement at the age of six, she went on to stud. She was the damsire to the great Skyline, a champion racehorse who won AJC Derby, the STC Golden Slipper, among other races. Her first stakes win was at the Champagne Stakes in 1943 and she went on to win 11 more between 1943 and 1946.

Flight Wins 5 Races As A 2YO

At the age of two, Flight won 5 races out of the eight that she participated in. Her first two victories were in the A.J.C (Australian Jockey Club) Havilah Handicap and the A.J.C December Nursery. She also went on to emerge victorious at the Rosehill Nursery Handicap and later on at the Champaign Stakes.

She had clearly made a big arrival at the racing stage as a junior, as she later won the Victoria Juvenile handicap while carrying 9 stone 7 pounds. She also finished second once and third once; Mayfowl beat her by a head at the A.J.C Sires Produce Stakes and third at the A.J.C Valicare Handicap.

A year later, Flight was on a good run, picking up from where she left by winning the Hobartville Stakes and the A.J.C Stakes in quick succession. She also won the S.T.C Lord Mayor’s Cup, the Craven Plate and the Adrian Knox Stakes. She was defeated by Goose Boy in the A.J.C Derby but then won the Quality Handicap and the Australia Day Handicap. Flight was also second at the A.J.C w.f.a. Stakes.

When she turned four years old, Flight beat Katanga at both the Colin Stephen and the A.J.C Warwick Stakes. She came second in 3 races and came third thrice. His second place finish first came at the AJC Metropolitan Handicap while carrying 55 kg of weight.

Later on, Katanga had his revenge on Flight, as he beat her in the Autumn Stakes and A.J.C Chipping Norton Stakes, effectively revenging the double win by Flight the previous year. In addition, Flight came third on two occasions behind the A.J.C Plate and Sydney cup with both races won by Craigie. She was also third in the Craven Plate.

She then went on to win the W.S Cox Plate in Melbourne, followed by wins in the St. Georges Stakes, the C.F. Orr Stakes, V.R.C Essendon Stakes and then later on in the C.M Lloyd Stakes, all of which were held in Melbourne.

At the A.J.C Plate later on, she defeated seasoned champions such as Tranquil Star and Royal Gem to win the race, but was then defeated at the A.J.C Chipping Norton Stakes where she finished in second place. During this very year, she was second in 3 major races: the A.J.C Autumn Stakes, the L.K.S Mackinnon Stakes and the Tramway Handicap. She was also the runners up at the Q.T.C El Alamein Stakes later in the year. Flight made eighteen starts at the age of five, out of which he won eight races.

During his final racing season, Flight won other 3 major races. Her wins came at the Essendon Stakes, Mackinnon Stakes and the W.S Cox Plate. Shannon beat her in two occasions in the King’s Cup and at the George Main Stakes.

This was in addition to the three other races in which he finished second (the Linlithgow Stakes, the Rosehill Hill Stakes and the C.F Orr Stakes).

After her retirement, Flight could only manage to give rise to five foals. Unfortunately, for Flight though, she died of an internal haemorrhage in 1953 because of the complications that came up during the birth of her fifth foal.

At the time of her retirement, she was one of the greatest horse racing champions in the whole of Australasia and held the record of being the mare with the highest number of stakes wins. Flight did greater than her dam, who was an unplaced mare from New Zealand and even though she died of health-related complications, it will be remembered how Jack Thomson (Flight’s jockey) recounted the many occasions when he had himself thought that Flight was going to succumb to illness and the pressure that came with high level racing.

However, Flight’s never-say die attitude would always surprise him as he could overcome the challenges and perform even better in the races that followed thereafter.