Sir Donald Bradman: There have been several athletes throughout the history of sport and the world who have been so gifted physically that it would seem that they could have achieved greatness in any sport of their choosing.

Some of these did manage to participate in two sports at high levels, owing to the seasons for those sports not conflicting or only overlapping slightly. Other athletes have switched sports for which it seems they were born to excel and made ill-fated forays into other games where they proved mediocre.

In the case of one of Australia’s greatest of all time, he participated in two of the country’s most popular sports and seemed to fall into the first category above of those who could do either exceptionally well.

He actually gave up the sport in which he would go down as the greatest to ever play for a period of two years, and only an employer, who it must be said was very accommodating of our subject’s athletic endeavours and provided him with time away from work so that he might pursue his athletic interests, prevented the game of tennis from achieving precedence, in order that cricket should have the benefit of his services. 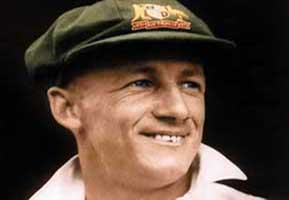 If there is yet still any mystery concerning our subject, we will now eliminate it in favour of a brief examination of the career of this unparalleled gentleman.

There are always some intangible elements associated with any athlete. These at times make designating one or another the “All Time Greatest” a subject of debate, but the game of cricket, with its copious degree of statistical record keeping, shows Bradman so superior to any other that he is without question acknowledged as the greatest Test batsman of all time. With only a slight risk of hyperbole, his Test batting average of 99.94 is so far beyond those of his nearest followers that it almost seems like a misprint, but the second and third-place batsmen were nearly 40 points lower!

Donald Bradman had natural-born prowess and was enhanced by his spending countless hours and days practicing batting by using a cricket stump and a golf ball as substitutes for a conventional cricket bat and ball, so that in all probability, when he got to the place of playing with standard equipment, the bat must have seemed infinitely broad and the bowl absolutely huge, basketball-like in size.

It took Don “The Don” a nickname that had some connection to his Italian ancestry, just slightly over two years to go from bush cricketer to the Australian Test team. He was but 12 years of age when he hit his first century playing against older high school players.

A pilgrimage to the Sydney Cricket Ground in 1920 to watch the fifth Ashes Test match was the inspiration for Don Bradman to declare that, I shall never be satisfied until I play on this ground.”

At the age of 14, Bradman left school and worked for a real estate agent who permitted Bradman who gave him time off in order to pursue cricket. That situation was in effect when he dropped cricket to explore tennis for a couple of years. He was so competent in that sport that he was invited to participate in the Country Week tournaments in both sports, but since they were held on different weeks, his normally compliant realtor boss offered Bradman only one week away from work, and it was cricket that was to win out over tennis.

Don Bradman’s cricket exploits soon became the source of incredible accomplishments. The records very nearly seem hallucinatory. Playing against Wingello and future Test bowler Bill O’Reilly, he made 234. He turned in a 320 not out that lasted five consecutive Saturdays against Moss Vale.

Donald Bradman debuted in Sydney as a member of the St. George squad saw him scoring 110, that being his first century on turf. His first class debut during the 1928-29 season, when he was just 19, came at the Adelaide Oval, where he produced an innings of 118 for the NSW team.

Bradman’s initial exposure to the top levels of cricket was not without hardship. In only his tenth first-class match, he scored only 18 and 1 and was dropped to twelfth man. That negative experience produced some soul searching, to the degree that when he got his chance in the Third Test of the Ashes at the Melbourne Cricket Ground, he scored a 79 and a 112, even though it was in a losing effort to England. In the Fourth Test, he scored 58 in the second innings and seemed poised to lead his team to victory, when he was run out for the first, and extraordinarily, for the only time in his Test career!

The fifth and final Test produced a victory for the Australian team. Bradman completed the season with almost 1,700 first-class runs, verging 93.88 and set out on a 20 year career during which that phenomenal average would increase. What could have possibly prevented him from stalling just .06 from an average of an even hundred is the type of question that will have cricket fans forever baffled, with that unimaginable round number tantalisingly within reach.

Bradman’s further exploits were equally mind boggling. There is little wonder why he is considered the greatest cricketer of all time. His production and longevity, two critical criteria, are essentially unequalled. A complete detailing of his phenomenal accomplishments would be nothing short of encyclopedic in length, and well beyond the scope of this examination.

Donald Bradman, after years of less than stellar health, and a hiatus during the war years from 1940-45 during which international cricket was not contested, began to move towards an administrative role in the game, one which would occupy several decades, even though he was still capable of producing centuries against high level competition. He played his last test match in Australia in 1948 before embarking on a farewell tour in England. Even at what some characterised as a batsman only a mere ghost of his former self, that ghost went into his final Test at The Oval in London with a career Test average of 101.39. He was deceived by English bowler Eric Hollies and even though Australia won the match, Donald Bradman never got another chance to bat and restore his average to over 100, which would have taken nothing more than four runs in his last innings to achieve.

Donald Bradman legacy is one where cricket fans have continued to exhibit a fascination with the man that defies comprehensive description. He was the first inductee into the Sport Australia Hall of Fame.