Darren Lockyer: Seventeen years represents a long time for a career as a professional athlete.

Even in sports with minimal contact, the human body loses strength, flexibility, speed, stamina and the ability to recover from the demands of competing at a high level.

When the sport under consideration is rugby, a 17 year career borders on the incredible when consideration is made of the collisions and mayhem generated when prime physical specimens with opposing objectives clash, along the sometimes seemingly innocuous contact that turns the future of a promising or well-established rugger into a future were simply going about normal day-to-day activities presents a challenge.

If the seventeen-year career part did not reveal the identity of our subject, it will here be told that we will be concerned with the rugby player known as Darren James “Locky” Lockyer. Perhaps he should have been known as Lucky. 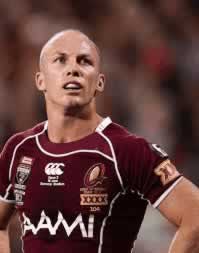 Darren Lockyer was born 24 March 1977 in Brisbane. His youth sports participation was in Australian Rules Football. When his family moved to Wandoan and then Roma, he started playing rugby due to his close relations to his cousins Gregory and Scott. It was here that he rose to play senior level rugby for the Roma Cities Gladiators.

Darren Lockyer experienced success early on, although that is not especially uncommon for men with the requisite physical attributes of the rugby player. His 178 cm. stature and his 85 kg. mass is in an ideal range for certain positions. Combined with his natural aggressiveness, athleticism and devotion to doing those things that would further his abilities, it would seem that he was perfectly suited to his roles as fullback and five-eighth.

1995 found him making the most of his assets to earn Rookie of the Year honours with the Brisbane Broncos of the elite NRL. The following year saw him playing from the interchange bench in the ARL.

Darren Lockyer was to appear predominantly at fullback from 1997 through 2003. During the Super League Season of 1997, his coach used him as a replacement for Willie Carne and Lockyer also took over as goal kicker. Later in 1997, he made an appearance at fullback on the national team in a three-test series against Great Britain. The visiting Australians won the series, with Lockyer kicking two goals and one field goal for Coach John Lang’s charges in no less venerable a venue than Wembley Stadium.

1998’s chief accomplishments were as top point scorer for the State of the Origin series, a stint with the ARL against the Kiwis, and top scoring honours for Brisbane, where he smashed the previous record of 193, scoring 272.

Jumping ahead to 2000, Darren Lockyer was fullback for the State of the Origin series where his team totally dominated the opponents. He was also present in large measures when the Broncos won the NRL Grand Final against the Sydney Roosters. Significant accolades came his way, including the Australian Sports Medal and frequent references made to him as being the world’s greatest fullback.

2001 saw the Broncos traveling to Great Britain to play the 2000 Super League Champions, Saint Helens, which the Broncos lost. In a testament to this athleticism and skill, he was actually solicited to switch codes and play for Essendon in the AFL.

2002 and 2003 continued in much the same manner, with Darren Lockyer continuing his dominant play including a 2003 award, the Rugby League World Golden Boots, designating the player who is perceived to have been the world’s best international player for the year.

2004 marked Lockyer’s switch from fullback to five-eighth, what some would consider a radical move given his prowess as a fullback, one generally recognised as the best in the world, but on balance, doing something to give Lockyer more ball in hand opportunities was a sage tactical move on the part of Broncos coach Wayne Bennett, and really quite logical given the retirement of Ben Ikin.

That year was to include Darren Lockyer being publicly pilloried for “insensitive” remarks for an ill-conceived witticism about some alleged sexual misconduct involving the Bulldogs. Even though it would be thought by objective observers that rugby players should be judged by a different standard than cricketers, Lockyer, as Australian captain, was reprimanded by national officials. He quickly apologised for his insensitivity, an occurrence that is becoming all-too-common in a world where political correctness runs amok.

Locky ascended to Broncos captaincy in in 2005. He was top point scorer that year for the Broncos, but there were some rumblings of discontent by the talking heads over the wisdom of Lockyer playing as a five-eighth. A foot injury also impeded him and caused him to miss some games.

2006 was in all probability his greatest season amongst many great seasons. By way of summation, he became the first person since his former teammate Allan Langer to captain the winners of NRL, the State of the Origin series and the Tri-Nations series in the same year.

Darren Lockyer went on from there to demonstrate his worthiness for another five seasons. A thorough chronicle of his exploits is beyond the scope of this essay.

Some keynotes would be his being named in 2008 to the list of Australia’ Greatest Players, this list covering 100 years betwixt 1908 and 2007, and coming whilst he was still playing quite well.

2012 would have to prove the year of the most significant recognition possible for a rugby player when Bundaberg Rum released Darren Lockyer Limited Edition 6YO Release in his honour.

Darren Lockyer is a busy family man as the father of three boys, the most recent arrival being Hugo David, born 29 May 2013. He has taken up a career as a television commentator, and it would seem that his vast reserve of knowledge and anecdotes will serve him well in this capacity.

Beyond that, it would seem that Darren Lockyer can write his own script as far as the world of rugby is concerned.