Darren Beadman is an Australian jockey who was born in 1965. Currently racing in Hong Kong, Darren Beadman was inducted into the hall of fame in the year 2007, at the age of 41 and becoming the only one to be given such an honour while still actively involved in horse racing.

However, had he gone ahead and remained in retirement in 1997, he probably would have achieved a bit less than he has achieved so far. Darren Beadman came into the limelight following his win and second place finish at the Sydney apprentice jockeys’ title race in the 1982-1983 and 1983-1984 seasons respectively.

Darren Beadman then followed up this feat with a win of the same title in his third season of participation. Building from his success early on, he won the Golden Slipper Stakes for two year olds in the year 1984.He then went to France where he was the winner of the 1985 edition of Prix Morny for trainer John Fellows. 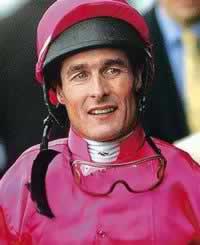 In 1990, Darren Beadman rode Kingston Rule to victory in the Melbourne Cup for Bart Cummings. His association with Super Impose brought him a lot of honour as he rode him to a double victory in 1991 with wins in the Epsom Handicap and Doncaster Handicap races held that year.

He went on to ride Super Impose in 18 other rides, winning quite a number of prestigious races. The other horse that was largely piloted by Beadman was Octagonal. In 1995, Darren Beadman was the winner of the Sydney jockeys’ premiership title and he defended his title successfully in the 1995-1996 season and won the 1996 Cox Plate while riding Saintly before announcing his retirement from horse racing to be a pastor.

That announcement took the racing world by shock as Beadman was at the peak of his career and enjoying a rollercoaster ride of wins. By the time he went into Christian Ministry, Darren Beadman had accumulated a total of 46 Group One (G1) wins.

However, after four years away from racing, Darren Beadman made a comeback in the year 2000 to continue from where he left. Upon his return from retirement, Beadman won the 2002 Mackinnon Stakes with Lonhro and went on to ride him in 24 of his last 25 starts. Beadman also won the Sydney premiership title a number of times: in the 2002-2003 season, in the 2003-2004 season and followed it up with 143 wins recorded in the season that followed, before setting the record for the most number of metropolitan area wins with 152 wins in the 2005-06 season.

Darren Beadman worked with John Hawkes and John Moore for the most time during his career, although John Hawkes was the one who benefitted most as a trainer from his wins, with a ratio of 3:1 in his favour over Moore. Of all the horses he rode, Lonhro was his most successful ride, with a total of 16 wins, including the prestigious C.F Orr Stakes and Australian Cup.

Darren Beadman also stands out for his impressive wins in some meetings. For example, he once won six times at a single meeting and won five times in other two meetings on one occasion, with a number of four meeting victories and three meeting victories to his name.

During his career, Darren Beadman was placed 2116 times out of the total of 7683 starts he had, with a total of slightly over $126 million in earnings brought in. He also won 44 G1 races, 60 G2 races and 49 G3 races. It is pretty obvious that his record would have been far much impressive and out of reach for many jockeys had he not opted to retire for a period of 3 years at an early age of 31 when his form was so amazing.

However, his move to Hong Kong would prove to be the defining moment of his lustrous career. After having moved there in the year 2007, he quickly settled down and proved his worth when he helped John Moore to win his first premiership title in a long period of 20 years.

Darren Beadman continued with his good form and won a further 250 races, including the prestigious Hong Kong International Bowl which he won two times, the MBHK Derby and the CXHK Sprint. Unfortunately though, in early 2012, a life-threatening injury finally forced him out into retirement. He fell at the Sha Tin Racecourse while undertaking barrier trial, the horse trampled on him, breaking his cheek bone and both of his legs.

Earlier thoughts that he could be rehabilitated and make yet another comeback were thwarted upon revelation that he had suffered severe head injury and his neurons and nerves. He therefore had to quit after thirty amazing years as a jockey, having set several milestones. Darren Beadman also famously talked about being happy that the accident spared his life and gave him the chance to continue doing what he loved most- being around horses in what he termed as “good therapy” in itself.