Crisp was a steeplechase racehorse that was fondly referred to as “Black Kangaroo” because of his great prowess on the hurdles racecourse.

He was bred by the former chairman of the VRC (Victoria Racing Club), Sir Chester Manifold.

He was a gelding, sired by Rose Argent from Great Britain and was foaled in 1963. Crisp’s sire was not so much of an established winner as he won in distances averaging just 1,400 metres. 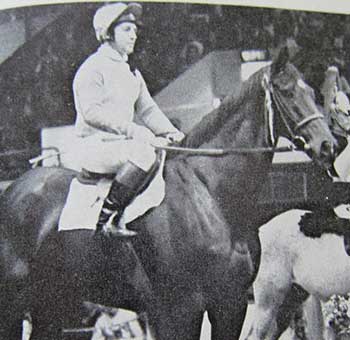 Fred Winter trained him. His historic breathtaking race against Red Rum in the 1973 Grand National race in England is one of the most memorable moments in horse racing history. In 1970, Crisp won the Hiskens Steeplechase held at Moonee Valley, retaining the title he had won the previous year.

The win in 1970 was an improvement on his part, as he won the race while carrying a weight of 76.5 kg, which was an improvement on the 70 kg he carried in 1969. His 1970 win was by a slightly narrower margin as he won by 12 lengths as compared to the 20 length he had won with in 1970. His racing career began on a high note when he won the 1971 Cheltenham Festival race.

However, prior to that, Crisp had shown his great racing prowess when he won his debut race by a wide margin of 15 lengths. This race was a handicap held in Wincanton in which he carried 79 kilograms of weight. Crisp’s body frame was a great advantage to him and the strength of his body and the power with which he jumped the hurdles in front of him was a spectacular site to get a glimpse of.

At the Cheltenham Gold Cup held in 1972, he performed relatively poor, coming in fifth over the three and a quarter mile race, which was won by Glencaraig Lady.

While still in Britain, Crisp was entered to participate in the high-calibre Grand National competition, which was held in Aintree. Prior to the race, it was clear that it was down to the two horses that had dominated the scene during those days; the odds favoured either Crisp or Red Rum. The bookies had placed the odds at 9/1 in their favour.

During the early stages of the race, this seemed to be destined for the worse for Red Rum, as the closest challenger to Crisp was Bill Shoemark, with Red Rum nowhere near contention. As they were at The Chair stage of the race, Crisp was seen by many as headed for victory, as the top weight (12 stone) he carried never seemed to deter him from winning.

If anything, he was winning; and by a wide margin. He steadily opened up the gap between him and the rest of the pack, first hitting the 20 lengths mark before widening the range further to 25 lengths. This was largely influenced by the fatal falling of Bill Shoemark at The Chair. As late as the 30th fence, Crisp was ahead by a massive 15th lengths, but Red Rum was steadily reducing the gap and closing in on him. It was clearly visible that the heavy weight that Crisp was carrying was taking their toll on him; and he was losing his steam and running out of power.

Perhaps boosted by the fact that Crisp was carrying 23 pounds more than him (Red Rum was carrying 10 stone 5 pounds), Red Rum while being ridden by Fletcher closed in on Crisp, who had by then slowed down drastically in the final run-in of 494 yards.

Crisp So Close To Victory

Crisp came so close to victory, but as fate would have it, Red Rum passed him at the final stages of race to win by just three quarters of a length. The close finish of the race proved to be one of the most memorable wins at one of the world’s most prestigious racecourses. Emotions ran high as those among the large crown who had hoped for a win by Crisp agonised in disappointed as those in support of Red Rum went home distraught.

It was however a consolation to note that Crisp had actually shattered the 40 year old Grand National record time by a massive 20 seconds. As for Red Rum, this was just but the beginning of his success at the Grand National stage; as he went on to win two other titles at this stage, although the later triumphs were not as adrenaline supping as his win in 1973.

Following his relative “success” at the Grand National, Crisp beat the race favourite Royal Relief at Newbury at a two and a half race mile race.

The win was a bold statement by Crisp, since Royal Relief had been widely seen as the favourite, having steadily established himself as an indomitable champion at the two-mile race. Later on, it was time for sweet revenge for Crisp as he defeated Red Rum by eight lengths at Doncaster.

Crisp’s win at Doncaster came at a price because he got a serious leg injury that forced him into retirement.

While in retirement, Crisp was involved in hunting; an activity that he did until his death. It is also worth noting that Crisp was not just a winner at home, where he won the Melbourne Cup among other major races; but he also won in Britain and America. His travel to America saw him emerge victorious in the Carolina Hunt Cup.