The Melbourne suburb of Sunshine is the birthplace of one of Australia’s more successful professional golfers, a man known to some as Popeye, due mostly to some impressively developed forearms and not for any kind of vision idiosyncrasy, Craig Parry.

Those prodigious forearms are a significant part of the reason Parry, who stands only 1.68 metres in height, has been able to carve out a respectable career on all of the world’s golf stages, much as he is able to carve a golf ball out of seemingly impenetrable rough.

Craig David Perry was born in the aforementioned Sunshine on 12 January 1966. He began his professional career in 1985, first winning on the PGA Tour of Australasia in 1987, when he was victorious in the Panasonic New South Wales Open held at Castle Hills Country Club northwest of Sydney. 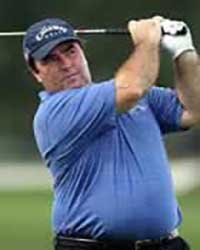 It was considered one of the lower rated events on the tour and at the time Parry won; it was a part of the developmental Von Nida Tour, after the golfer who won the event thrice consecutively in 1946-1948 and twice more in 1953-54. Parry’s win was sandwiched betwixt two wins by Greg Norman, so despite the event’s relative lack of status, it did attract some of Australia’s golf luminaries, including Peter Lonard and Ian Baker-Finch.

This time at the Victoria Open in Canada where he navigated the Gorge Vale Golf Club in British Columbia.

1989 found him playing, and winning in Japan, this being the Bridgestone ASO Open in Kumamoto, following a 1988 win by his fellow countryman Ian Baker-Finch.

He continued to show good form in 1989, as well as the type of killer instinct that permitted him to finish playoff victories against the tenacious Welshman, Ian Woosnam, in the Wang Four Stars (originally known as the Bob Hope British Classic) at Moor Park Golf Club north of London, and against England’s Mark James in the German Open, a tournament that has attracted high calibre players such as Seve Ballesteros, Vijay Singh and others who were able to prevent the tournament from being renamed the Bernhard Langer Wins Yet Again Open.

Craig Parry, pardon the pun, had a bit of a rough patch in 1990, at least in terms of victories, but it should be noted that he got into eight events on the PGA Tour, qualifying to play on the weekend on six occasions and placing in the top 25 twice.

Wins for Craig Parry came again in 1991. Once again, he got the better of Ian Woosnam, this time finishing regulation one stroke ahead in the Lancia Martini Italian Open held that year at Golf Club Castelconturbia. Two months later, Mark McNulty surrendered to Parry by one stroke in the Bell’s Scottish Open at the Royal Aberdeen Golf Club in Scotland, which qualified him to play in that year’s Open Championship, where he produced his second-best finish in that event, eighth place.

The Open was contested at Royal Birkdale in Southport, England, and is very notable for having the winner and runner-up that year in Ian-Baker-Finch and Mike Harwood, respectively. Parry’s PGA Tour season found him competing six times without failing to make the cut and producing three top-25 finishes.

Craig Parry best year on the Australasian Tour came in 1992, when he won three of the top four tournaments, those being the Australian PGA Championship, the New South Wales Open and the first of his three Australian Masters, the subsequent ones being in 1994 and 1996. He also made his presence known on the PGA, playing 13 times, making 11 cuts, placing as high as third and pocketing just under a quarter of a million dollars.

In August of 2002, he left his countryman Robert Allenby and American Fred Funk four shots in his wake to win the WGC-NEC Invitational with a scorching 16 under par 268 that included three rounds in the 60s after an inauspicious first round 72.

Of note was that was the only time the tournament was played elsewhere than the Firestone Country Club in Ohio. Parry’s victory came at the Sahalee Country Club in Sammamish, Washington (east of Seattle) and paid him a top prize of a cool million dollars. Parry would add $466,235 to that by playing in 20 additional PGA events, making 13 cuts and adding two top-10 finishes.

Craig Parry’s 2003 season was rather forgettable. There were no victories on any of the tours, and whilst he played 16 times on the PGA, making 10 cuts, he had only one top 25 finish and winnings just above a quarter of a million dollars.

His second and final PGA Tour win came in 2004. This time, he shot a remarkable 17 under par in regulation, only to find himself deadlocked with streaky Scott Verplank of the United States in the Ford Championship at Doral’s legendary Blue Monster in Florida. He pocketed $900,000 for that win when he bested Verplank in a playoff, joining Greg Norman and Steve Elkington as the only non-Americans other than South Africa’s Ernie Els to win the tournament. His prize money on the PGA for that year was $1,308,586.

Craig Parry would produce another good showing in 2005, winning over $600,000 on the PGA, making 10 cuts and producing two top-10 finishes, and he would win on the European Tour in the Heineken Classic. His most recent win was the 2007 Australian Open at The Australian Golf Club.

Craig Parry will turn 50 in January of 2016, making him eligible to play on the PGA Senior Tour. He does split time betwixt residences in Sydney and Orlando, Florida, and does seem content to devote the majority of his time to wife Jenny and their three children.

His professional record currently rests at 23 wins, 14 of those coming on the Australasian Tour. Those wins earned him recognition as the Order of Merit winner in 1995, 2002 and 2007.

Regardless of his future plans, everyone against whom he has competed and graced with the pleasure of his company, can lift a glass and sing not, “He’s Popeye the sailor man,” but “He’s Popeye the golfer man.”