As one of Australia’s most popular spectator sports, and thus enjoying great popularity as a participant sport, rugby has been around for a very long time.

That longevity is part of its appeal, since beyond some tinkering with the rules along the way, the game exists today in a form that is essentially similar to that which it took back when it 1864 when the first club was formed at Sydney University.

This long history of the game in Australia has produced some most proficient players. In 2007, a commission of rugby experts was assembled to sort through the historical records and choose the 100 best Australian players of all time. Their list was released early in 2008 and consisted of 17 players. 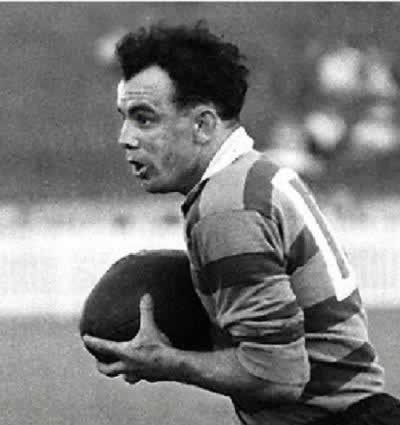 We thought it might be interesting to have a look at some of the players on the list, because any list such as this is certain to involve at least a little controversy, and also because it is entertaining to compare players from different eras as rugby has evolved into the sport it is today, where over 80,000 take part at some level.

Fullback For 16 Years At Newcastle

At just 175 cm. and 76 kg., Clive Churchill was only just a little too big to have been a thoroughbred jockey, and his nickname, The Little Master, reflects this perception. In part, the nickname came about because he was considered a smaller version of The Master, the great Dally Messenger.

Certainly diminutive by today’s rugby standards, even though the occasional exceptional talent can perform respectably at that size, Churchill was born in Newcastle, New South Wales, and got his start playing five-eighth at Marist Brothers Hamilton.

It would seem that he developed some of his ball-handling and play-making skills that are critical to that position, skills that would serve him throughout his career and enable him to flourish despite his small size. He also gained a bit of experience at fullback with Central in Newcastle, but the Brothers at his school objected to his playing with the Central juniors, thus he played on only a couple of occasions in that role.

Shortly after the conclusion of WW II, rugby scouts from Sydney became aware of his ability and signed him to play club for South Sydney for the start of the 1947 New South Wales Rugby Football League, where he would play a key role over the course of twelve seasons, until 1958. Clive Churchill would also play representative from 1948 – 1955 for NSW City, 1948 – 1957 for NSW, and 1948 – 1956 for Australia.

He served as captain for the Sydney Firsts in 1951 when the French Rugby League toured Oz and New Zealand. He also was designated as captain for Australia in 24 Test Matches over the course of six years. With NSW, he played 37 games, a state record. Churchill’s final test for Australia was on the 1956 – 1957 Kangaroo Tour.

Clive Churchill would be a part of much success over that course of time. With the Souths, five premierships to bookend those five he realised as a youth came in 1950, 1951, 1952, 1954, and 1955, although he was in England on the Kangaroo Tour in 1952 and was out with a broken arm in 1955 that prevented him from playing in those finals. He had apparently broken the arm in the second last match against Manly, where he won the game with a sideline conversion kicked after the bell whilst his arm was wrapped in cardboard. Apparently, no suitable cardboard was to be found for the final, possibly as the result of a scheme by the Newton club to enhance their chances.

It appeared that the scheme had a good chance of coming to fruition, since the Rabbitohs were deprived also of the services of Greg Hawick in addition to lacking Churchill. The Bluebags had a comfortable lead at the half and had even improved that lead with 10 minutes left in the game. A dramatic comeback by Souths, however, resulted in a 12 – 11 victory over the Newton side.

Whilst Clive Churchill was unable to participate, he was more than a little instrumental in Souths being in the final at all. They were dismal for the first half of the 1955 season, limping along with a record of just three wins in nine matches. A furious comeback saw them winning their next nine regular season matches to end up fourth, when every game featured the specter of elimination had they lost just once.

Churchill began to turn his attention to coaching, although his initial foray into that realm featured him serving roles as player as well as coach. He started out with the Souths, but won only six of 18 games in 1958.

He fared much better the following season, when he captain-coached the Brisbane Rugby League Norths to a premiership. He retired as a player at the end of that 1959 season, although he did something of a farewell tour in 1961, playing with the outback town of Moree’s team. He served in a non-playing coach when the 1959 Kangaroos toured Europe.

His coaching abilities were sorely tried in 1964. As the head of Canterbury-Bankstown, he endured a one-win, one-draw, 16-loss campaign. The sting of that season saw him away from the game until 1967, when he began a stint as coach of his old Souths club, leading the Rabbitohs to the premiership in his first season. That was followed by three more out of a total of five grand final appearances. He relinquished the helm during the 1975 season.

Clive Churchill was an example of an athlete who successfully bridged the chasm betwixt player and coach, something that is not common.

Many great players in all sports have failed in the attempt due to a seeming inability to transfer their skill and experience to their players, along with the reality that many times, those players do not possess the skills and talents to assimilate what is being made available to them. Many great coaches, on the other hand, were no more than adequate as players and perhaps developed coaching skills from being compelled to watch games from the margins.

As that rare instance of a great playing career followed by a great coaching career, Clive Churchill serves as a reminder that doing both is possible for those who are willing to assume the risk of failure involved.