Once her career on the racetracks was over, Black Caviar stepped into her role as a brood mare, apparently with the same ease with which she ran off 25 straight sprints before retiring undefeated.

She gave birth to a filly in mid-September of 2014 after being serviced by Exceed and Excel, another highly competent sprinter. Both of these horses have some similarities in their bloodlines that are decidedly international in many respects, with contributions on both sides that include some notables from North America and Europe, including some common ancestors. 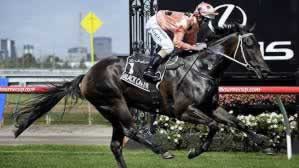 Exceed and Excel was raced only 12 times, but won seven of those in accumulating a quite respectable $1.28 million in earning, which works out to roughly $1 million for every time he crossed the line at the head of the pack.

The owners of the recent arrival have indicated a desire to retain the filly and raise her for racing purposes, even though they could have sent her to the sale ring in anticipation of a multi-million dollar payday.

With that news out of the way, we can return to a closer examination of Black Caviar and the exploits that made her a major favourite of not just the racing fans, but also of the Australian public in general.

Black Caviar was foaled on 18 August 2006. Her sire was Aussie native Bel Esprit that made 19 starts, winning eight times and placing on five occasions. Un-raced Helsinge was the dam that along with producing our subject was also responsible for All Too Hard, a four-time Group 1 winner with a claim to second place finishes in the AJC Sires Produce Stakes and the slightly longer MVRC Cox Plate.

Due to the convention of assigning horses born in the southern hemisphere the same birthdate, Black Caviar was closer chronologically to three when she began racing as a two-year-old, which conceivably could have given her a minor advantage over her adversaries, but hardly one to account completely for her prodigious achievements.

When she began racing as a two-year-old in the 2008-2009 season, she competed only twice, winning her debut and a listed race, The Blue Sapphire Stakes, by a combined total of 11 lengths, keeping in mind that these were sprint races.

Black Caviar’s three-year-old campaign in the 2009-2010 season saw her winning a listed race first-up, after which she leapt up in quality to the Group 2 level and won at Flemington, despite stumbling at the start and throwing a scare into her connections. An injury sustained in that race elicited caution from trainer Peter Moody and she did not race again until January. She won the Group 2 Australia Stakes in fairly convincing fashion, but was subsequently injured in her right foreleg, causing her to miss the rest of that season.

For the 2010-2011 season, she came back as a four-year-old, winning Group 2 events at Caulfield and Moonee Valley, setting the stage for her first try at a Group 1 event. That would have been the Patinack Farm Classic, where she literally destroyed a field comprised of Hay List and other multiple Group 1 winners.

She was spelled until February, where she picked up where she left off, winning Group 1 races and setting a record in the Newmarket Handicap despite drawing 58 kg. A close call followed, when the champion Hay List appeared to have her beaten in the T. J. Smith Stakes when he broke from the field on the top of the straight, only to see her run him down and leave him trailing by three lengths at the post. She won again in Brisbane and was the highly anticipated favourite for the Doomben 10,000, however, it was again decided to rest her until the following spring.

When she returned for the 2011-2012 season as a five-year-old, she immediately put herself in the picture of the all-time greats when she won her 14th consecutive race, tying her with the immortal Phar Lap. She added numbers 15 and 16 before taking a hiatus from the rest of the spring racing season. January of 2012 found her schooling the pack at Moonee Valley before turning in a win at 1400 metres on a wet track at the C. F. Orr Stakes. Following that, she again showed her backside to Hay List in the Coolmore Lightning Stakes. The autumn season proved productive, with wins at Morphettville, twice within a span of two weeks in the latter days of April and the first days of May.

June of that year found her being sent to England to take part in the Diamond Jubilee Stakes at Royal Ascot. She won despite an error on the part of her rider, Luke Nolen, but was injured in the process. Her record at this point stood at 22 jumps, 22 victories. The injury compelled her connections to return Black Caviar to Australia and she did not race again until February of 2013.

Her six-year-old campaign saw her win the Lightning Stakes, eclipsing a time record that had lasted 25 years and giving her three victories for that race. The following month, after becoming the second living horse to be honoured with induction into the Australian Racing Hall of Fame, she won the William Reid Stakes, marking her 14th Group 1 victory, which tied her with Kingston Town.

Her final race and victory came in April of 2013 at the T.J. Smith Stakes, where she established the record for most Group 1 wins. Black Caviar was retired after that race, and given her history of injuries and long spells, it appears in hindsight to have been the right decision. Her entire racing career lasted just over four years according to the calendar, and it was mainly her seasons as a four and five-year-old that accounted for the lion’s share of her victories.

Hopefully, she will have a long and productive career as a brood mare, one that will produce at least one other to five chase to her records.