The World Cup is the stage where real titans have marked themselves out as heroes. A lot of these men are celebrated to this day.

Some great footballers don’t make the cut, though, because they couldn’t quite find that killer touch on the world stage.

These are true legends of the sport that carried the weight of their respective nations on their back. So who are the true superstars of the FIFA World Cup?

The Brazilian icon won three World Cups in 1958, 1962 and 1970 and he was part of the most exciting teams the world has ever seen.

The Brazilian Samba Boys cut a swathe through the competition with expressive, attacking football. The South Americans bought skills that Europe had simply never seen and Pele is still considered to be the greatest footballer of all time.

He went to the World Cup as a 17-year-old for the first time and scored a serious amount of goals. He turned himself into an instant hero when he won the final against Sweden with a sublime piece of skill in front of the goal. It was Brazil’s first World Cup win and it was the start of a dynasty.

Pele retired before the 1970 World Cup and then did a U-turn, producing vintage football to score four goals in the competition and set up many more. He played at Santos, in Brazil, for his whole career until he took a retirement tour with the New York City Cosmos.

Edson Arantes do Nascimento was a pioneer and he is still revered in his homeland for his antics at the World Cup and at club level. Pele was the highest paid athlete in the world at the time. 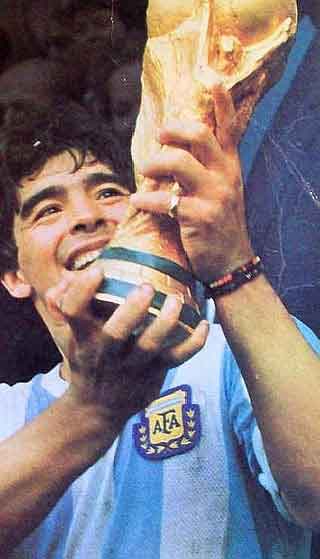 Maradona tarnished his legacy later in his career with a wild private life and a failed drugs test that ended his international career at the 1994 World Cup. At the peak of his powers, though, he was absolutely unplayable.

Unlike Pele, Maradona didn’t have the best team around him, but he was the best individual in the world by a long shot. He tormented entire teams, dribbling round them all before slotting the ball home. He played in four World Cups, Argentina won one and lost another in the final. That was largely down to the sheer impact of Diego Maradona.

He won the 1986 World Cup for his team; it’s really that simple. He ripped England apart single-handedly, then the Belgians in the semi-final. He was also instrumental in the final, threading the critical pass to beat Germany.

He was controversial, too. He was sent off in 1982 against Brazil and then there was the infamous ‘Hand of God’ incident in 1986. The diminutive Maradona seemed to out jump the England goalkeeper to head the ball in, but the replay showed he used his hand. Maradona insisted the goal was divine intervention. Then he added insult to England’s injury with possibly the finest individual goal ever scored in World Cup history.

He was sent home from the 1994 World Cup after using banned weight loss supplements. Maradona had his demons, but on the pitch he was sublime. He will go down as one of the greats and his goals will never be forgotten.

He was far from a spectacular player and Klose wasn’t the kind of striker to skip past defences. He was a predator with a supernatural talent for turning up at the right place at the right time for a simple tap in or powerful header. It was a skill that served him well.

Not a single goal that Klose scored at the World Cup would make a highlight reel. The most spectacular part of his play was the forward flip he would always complete in celebration after scoring. He got the job done, though, and was the driving force for Germany in four World Cup finals.

Not the new Ronaldo but rather the original from Brazil. Ronaldo Luis Nazario de Lima won the World Player of the Year title three times, two Ballon d’Or Awards and a whole host of club honours with Barcelona, AC Milan, Inter Milan and Real Madrid. His three World Cups, though, from 1998 to 2006, have made him a legend in his homeland.

He is the second highest goalscorer for the national team, fittingly behind Pele. He was just 17 when he went to the 1994 World Cup, but he did not play. He set the record straight four years later, leading the line right to the final. A convulsive fit just before the final affected his performance, though, and Brazil lost out to France.

There was no mistake in 2002. Ronaldo took the Golden Boot award for his eight-goal haul and he led his team to the trophy. He has 15 World Cup goals in total and, although the team couldn’t do it again in 2006, Ronaldo is still a legend of the game.

His World Cup career ended in disgrace when he was sent off for headbutting an opponent in the chest in 2006. But, before then, Zinedine Zidane was France’s talisman and a simply spectacular footballer.

He plied his trade for Juventus and then Real Madrid, the club he now manages, at club level. He was the world’s most expensive footballer when he joined Real for $100 million in 2001, he was the World Player of the Year three times, won one Ballon d’Or and became France’s fourth most-capped player in a glittering career.

He was the driving force behind the 1998 World Cup win for France, including scoring twice in the final. France simply dominated world football at the time and that was largely down to the strength, vision and creativity of Zidane bossing the game from midfield.

2002 was a disastrous competition, with an injured Zidane largely forced to watch as France were dumped out in the group stages. 2006 was a mixed bag for Zidane. He won the Golden Ball award as the best player of the tournament and he helped France to the final.

The stage was set for Zidane to retain the World Cup. He scored a cheeky Panenka-style penalty, but he totally lost it in extra time and headbutted Marco Materazzi in the chest. He was sent off and was forced to watch his team lose the penalty shoot-out.

It was a strange end to the international career of one of Europe’s greatest ever players. He did rack up six World Cup final red cards, too, which is a record he might want to forget