Bernard Tomic has won only once on the ATP tour, but he has made some very respectable showings against well regarded, highly ranked competitors.

Whether or not he can make the leap from first round sacrificial lamb to consistent deep-into-later-rounds lion remains to be seen, but he is just 21 years of age and is playing at the events that will provide him with the seasoning and experience to challenge the likes of Rafael Nadal or Novak Djokovic. 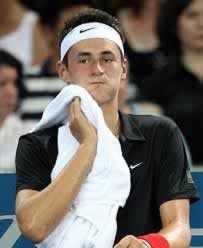 Bernard Tomic was born 21 October 1992 in Stuttgart Germany. His father is of Croatian heritage and his mother Bosnian. They lived in Yugoslavia, but left for Germany several years prior to Bernard Tomic’s coming into the world. They later left to take up residence at Gold Coast in Queensland when he was three years of age. He has a younger sister, Sara, who is currently playing at the junior level.

Bernard Tomic certainly did not lack for confidence when he got his start on the ITF junior tour. Not content to hold forth modest claims of desired future success, he told anyone who would listen that he would become the number 1 player in the world, win major tournaments and represent Australia in the Davis Cup as the youngest player ever to do so.

Bernard Tomic did select good role models, saying that he would pattern his game after notables such as Ivanisevic, Sampras, Federer and Hewitt. He planned on modelling his game after the best tennis qualities of those individuals, serves, groundstrokes, desire, etc., but he stopped short of saying that he wanted to have the demeanor of John McEnroe, doubtless because he is too young to recall Johnny Mac.

As a famous pitcher of the St. Louis Cardinals of the 1930s, Dizzy Dean was heard to say, “It ain’t braggin’ if you can back it up”, Bernard Tomic let his tennis do the talking by taking numerous singles match wins at the Orange Bowl in the United States, one of only five rated Grade A by the ITF, something akin to the Group 1 classification in thoroughbred racing.

All the greats of the open era have played in the Orange Bowl, including names such as Ashe, Becker, Borg Connors, Federer and Lendl.

Bernard Tomic was only 14 when he played in his first junior Grand Slam, the 2007 Australian Open. He failed to advance past the second round in that tournament, however, and he experienced a similar, though not identical fate in the junior French Open of that same year.

Bernard Tomic did win the Oceania Closed Junior Championships in August of 2007, and he managed that without losing a single set. In Italy, Tomic would lead the Australian Junior Davis Cup contingent to victory over Argentina and finish the year ranked 23rd amongst juniors.

The following year Bernard Tomic became the youngest to ever win the Australian Open Junior title, being just 15 at the time.

The following year, 2009, found him winning the U.S. Open Boys’ Singles title. Even though he remained eligible to play juniors, this would be the last time for Tomic. He finished the year ranked junior number 2 in the world.

His junior record in the Grand Slams concluded at 30 wins against 8 losses. His ITF junior record for the period betwixt early 2006 and August of 2009 was nine wins against zero defeats, with six of those wins coming in either Australia or New Zealand, two in the United States and one in Fiji.

Bernard Tomic was competing in senior professional events as early as 2008, when he was just 15 years of age. He played quite well, well enough to gain a wildcard entry into his first ATP event, the 2009 Brisbane International. He exited quite unceremoniously in the first round. He did advance when a similar wildcard opportunity found him in the Australian Open.

Bernard Tomic beat his first round opponent, in the process becoming the youngest male tennis player to ever win a match in that Grand Slam tournament. This was not quite the fulfillment of his claims, but it is impressive when you consider that in men’s’ tennis, players of his age seldom have the requisite physical development and playing experience to stand up to that level of competition. He earned a senior world ranking of 286.

He continued to progress in 2010 and finished that year by moving up 78 places in the world rankings to number 208.

Bernard Tomic’s 2011 season was where his high water mark was attained when he made it to the round of 16 in nothing other than Wimbledon. Along with beating seeded players along the way, he took a set from Novak Djokovic.

That same year, he represented Australia in the Davis Cup against Switzerland, where he ran into no less formidable an opponent than Roger Federer, who proved too much for young Bernard Tomic.

The year did conclude with Bernard Tomic again climbing the rankings, this time to number 42.

He reached another milestone in 2012, gaining the semi-finals of the Brisbane International, where it required world number 4 and eventual tournament champion Andy Murray to deny him further advancement.

Djokovic handed Bernard Tomic another defeat in that year’s Italian Open, but Bernard Tomic was showing that he would not go quietly into that gentle night, making the established upper echelon players work to beat him.

Bernard Tomic would extract some measure of revenge on Djokovic in 2013, defeating him as Australia’s representative in the Hopman Cup. His first ATP singles victory came shortly thereafter when he won the Apia International in Sydney. He then made a most respectable showing at Wimbledon, making it to the fourth round.

At the present time, Bernard Tomic has won half of his matches at the ATP Masters Series level. His predictions have not come true, but it must be said that other tennis players have made equal or greater claims and produced lesser results.

As he continues to mature physically and mentally, it is possible that someday Bernard Tomic’s name may be mentioned in close proximity to names such as Rosewall and Laver, which would be according to Dizzy Dean, “backin’ it up.”