At the age of 87, he is still energetic and engaged. He has scaled back, obviously, by closing the Melbourne branch of his training operation and concentrating on the stable in Sydney, which is overseen for the most part by his grandson James. The two men had their first Group 1 winner in the Golden Rose in September 2014, courtesy of Hallowed Crown. 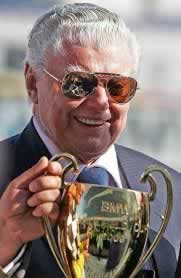 That victory provided Bart Cummings with a career total of 265 Group 1 wins to go along with his 12 Melbourne Cup victories, making him more than worthy of consideration of the top Australian trainer of all time. Other records to which he can lay claim are 20 Group 1 wins in the 1974-75 season, a record that was the result of 10 different horses.

Two of those 20 wins were Melbourne Cups delivered by Think Big, the stayer that Cummings managed brilliantly in order to make the most of somewhat limited starts.

Light Fingers delivered Cummings’s first Melbourne Cup in 1965. That was followed by the next two consecutive with 1966’s Galilee and 1967’s Red Handed, meaning that Cummings was just short of his 41st birthday when he secured his third victory. The most recent has been 2008’s Viewed. The victories in five of those years also saw him responsible for the second place finishers as well.

An even moderately detailed account of his racing exploits is the province of a book, or even several volumes, but for the moment, his list of significant races includes seven Caulfield Cups, four Golden Slipper Stakes, five W.S. Cox Plates, eight Newmarket Handicaps and nine VRC Oaks.

Bart Cummings was born 14 November 1927 and christened James Bartholomew Cummings. His father was also a trainer of thoroughbreds and has Comic Court to his credit, the winner of the 1950 Melbourne Cup. Bart spent his early formative years growing up in Adelaide. When he had taken his formal education to its natural conclusion, he worked for his father as a strapper. This required more than a little perseverance and toughness on his part, due to allergies to, of all things, horses and hay!

He was still shy of his 30th birthday by a few months when he received his trainer license in 1953.

He established stable in the South Australia town of Glenelg. It was five years later that he won the SAJC South Australian Derby, his first significant win, when Stormy Passage crossed the line ahead of the field. That same year marked his first foray into the Melbourne Cup, with a 12th place finish with Asian Court. The following year, Cummings fared slightly better, with Trellios finishing fifth.

It was not until five years later, 1965, when Cummings would train Light Fingers for the Melbourne Cup win and supply the second place runner in Ziema by less than a full head. He also had a third entrant, The Dip, that ran 18th.

That 1965-66 season saw Bart Cummings winning the first of his Trainer’s Premierships, along seemingly, with any race that had the word cup in the name, including the Adelaide, Brisbane, Queen’s Sandown Sydney and the Caulfield.

His good fortune continued over the next several seasons. He opened stables at Flemington, won four more premierships over that span, and generally established a standard of high performance and results that would last for the balance of the century and beyond.

It was the Melbourne Cup of 1969, however, that would supply one of the more interesting chapters in his illustrious career. Racing fans will recall that Cummings’s horse, Big Philou, had won that year’s installment of the Caulfield Cup and entered as the favourite for the Melbourne Cup, offering Cummings a good shot at earning a rare Cups Double.

That Caulfield Cup victory had an element of controversy attached, because it was the stewards, not Big Philou’s legs, that secured the victory when it was ruled that the actual first place runner, Nasouri, was less than two lengths ahead when crossing Big Philou’s line.

The 1969 edition of the Melbourne Cup featured the previous year’s winner, Rain Lover, with Jim Johnson taking the reins. None other than Roy Higgins was set to take the ride on Big Philou. Higgins was confident then, and remained so afterward, that Big Philou was as near to a certainty to win the race as is reasonably possible.

At that time, the Cups double had only occurred on six occasions.

Big Philou drew massive backing, despite the presence of Rain Lover in the field. In fact, Rain Lover could not attract sufficient backing to go off at anything lower than 8-1.

Historical accounts chronicle that someone slipped into Big Philou’s stall on Monday evening prior to the race, and administered a massive dose of the powerful laxative Danthron to Big Philou. The end result was that the horse was scratched less than an hour before the race was to begin, accompanied by howls of rage from punters who were counting on an easy payday.

The culprit, or should we say the actual perpetrator of the deed was not discovered until the deathbed confession of a strapper in the Cummings stable, Les Lewis, confessed on his deathbed.

Big Philou did recover eventually to win again, but the “what if” aspect of the story will outlive everyone alive today.

Bart Cummings went on to supply nine more Melbourne Cup winners, including the last horse to win consecutive cups prior to Makybe Diva.

Even though Bart Cummings is not nearly as involved with training as in the past, he still consults daily with his grandson James on the day-to-day goings on at the stables. It would appear that he has discovered that elixir of life that comes from doing what you love to do for as long as life permits.