Athol George Mulley was a legendary Australian jockey who was actively involved in horse racing for a period of 40 years. His most memorable triumph came while he was riding the legendary Bernborough, in the period between December 1945 and October 1946. During that time, he led Bernborough to 15 wins in succession, a triumph that cemented his position as “the contemporary George Moore”. 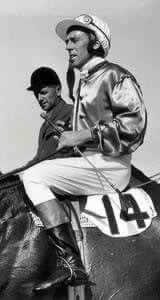 He was runners up to George Moore in the Sydney Premiership three times. However, his cutthroat competition against Moore at times led to the exchange of harsh words between them. Athol Mulley had a lustrous career that led to his being inaugurated in the Australian Racing Hall of Fame in the year 2012, 11 years after his death.

40 out of the more than 2000 wins that he had have since been upgraded to Group One (G1) status. Athol George Mulley was a sure showstopper, although his exaggerated level of superstition won him lots of admirers and haters alike. The most notable of his superstitious behaviour was the belief that walking out last from the jockeys’ room would give him an upper hand against his opponents.

It has however been claimed that all the sideshows that Athol Mulley pulled were part of a wider scheme to get Moore to be angry and therefore lower his psychological advantage as compared to Mulley, who was his major supporters. In addition, Mulley had a challenging period on the racecourse, as a result of Parkinson’s disease as well as having to face stiff competition from other equally great jockeys at the time, including Jack Thompson, Billy Cook and Neville Sellwood.

Athol Mulley’s other notable wins were the 1945-1946 and the 1960-1961 Sydney Premiership titles, the Golden Slippers, four titles he bagged at the All Aged Stakes. For all his success, Athol George Mulley won lots of accolades both in Australia and abroad in India, Singapore and France with different horses. For example, in the 2,000 Guineas held France in 1963, he rode Corpora to finish third.

Mulley’s success with Bernborough is an incredible success story, especially considering the fact that Bernborough started racing at a relatively old age of six years. However, under the stewardship of Mulley, Bernborough achieved great success after just a few races, including the 15 consecutive wins he had in the 1945-46 period.

However, as a result of the great success that Bernborough’s owner had been used to, he did not take the loss at the Caulfield Cup of 1946 very kindly and so Athol Mulley lost his job as a result; albeit under very controversial circumstances. Bernborough had been started at 7-4, a factor that made him the shortest priced favourite in the 20-year period that preceded the race.

He eventually lost the Caulfield race while carrying the heaviest weight of the competition. Prior to the famous Caulfield Cup race that eventually led to his being sacked, Athol Mulley had already approached Darby Munro and requested him to be substituted since he couldn’t handle the expectations and pressure that came with the race in front 108,000 punters.

Athol Mulley eventually only managed a fifth place finish at the Caulfield Cup, something that was viewed as a great failure, especially going by Bernborough’s reputation. He went on to win the Golden Slippers while riding three different horses, which included the win at the 1958 event, where he rode Skyline, the 1960 Golden Slippers win while riding Sky High and the win of the 1964 Golden Slippers as the jockey for Eskimo Prince.

Mulley’s controversial side did not end with the Caulfield Cup, but he was also famous for being somewhat as a joker. For example, in one instance, he attended the Rosehill Racecourse instead of the Warwick Farm racecourse; a factor that he attributed to having read a one week old newspaper which was obviously outdated.

At the end of his successful stint as a jockey, Athol Mulley went on to become a trainer. He carried on with his duties as a trainer for a period of 15 years before finally throwing in the towel in horse racing. Mulley’s critics used to argue that he often used unorthodox means to win some of his races, including causing his opponents to trip. His struggle with Parkinson’s disease finally saw him succumbing to the illness in the year 2001.

In his honour, the Royal Randwick Racecourse had a trophy named after him. Mulley’s only discontent was perhaps being left out of the inaugural Australian Racing Hall of fame, while his peers with whom he actively competed were included, with the great Bernborough being among the inductees. His induction came several years later and it might have been viewed as a step in the downward direction for the racing great.