True, but then Makybe Diva, Phar Lap and Black Caviar were horses. The Hawthorn Hawks is a footy team. Don Bradman was a cricketer. Rod Laver was a tennis player. Greg Norman was a golfer.

We could go on, but our point about understatement should be clear to the highly educated, intelligent, handsome and beautiful readers who lend us their eyes for the moments required to read our entries regarding the athletes who have posted indelible marks on the history of sports in Australia and around the world. 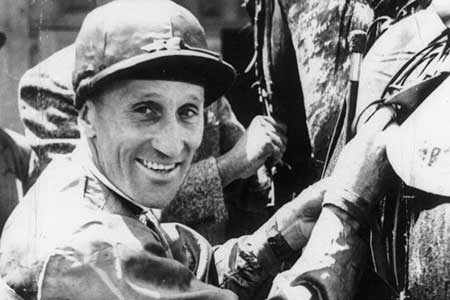 Breasley’s credentials place in squarely and legitimately in the group of all time greats. He won almost 1100 races in Australia, a more than adequate tally for the career of a highly competent jockey. He did not rest there, however, as he rode another 2,161 winners in Great Britain and on the Continent, so that his final tally for races won was 3,251.

Of course, numbers such as he posted require an extended career, and Breasley was fortunate in that regard. He began his apprenticeship at the age of 12, which would have put the year around 1926. He rode in his home town under the tutelage of trainer S. H. Biggins. His last race was in 1968, so he spent well over 40 years as a jockey, and then turned his attention to training. It was not long into his life when young Arthur Edward acquired his nickname of Scobie, and yes, it was derived from the name of the famous trainer James Scobie.

It did not take him long to gain notice. He was winning in Melbourne as early as 1928 after showing up there in 1927.

After winning for the first time, he continued to earn a solid reputation, despite his youth and relative inexperience. He was just 16 in 1930 when he won the AJC Metropolitan Handicap, as it was known betwixt 1898 and 1978. Breasley was aboard Cragford, prepared by Pat Quinlan, to pilot the horse over a mile and five-eighths of Randwick racecourse turf.

Breasley surely must have accomplished something from 1930 onwards, but in terms of major race victories, it was into the 1940s when he began to become a true star of the track.

He won the first of four consecutive Caulfield Cups in 1942, when he guided future Hall of Famer Tranquil Star, the race-mare that had 111 starts and was a two-time winner of the Cox Plate, the first in 1942 at the expense of Melbourne Cup winners Colonus, Skipton and Dark Felt, although it was not Breasley, but K. Smith doing the steering, for reasons unknown.

Breasley’s win in 1943 found him astride Skipton, the Melbourne Cup winner in 1941. The 1943 Caulfield Cup had so many entrants that it was run in divisions.

In 1944, Breasley had the ride on Counsel to notch his third Caulfield Cup in a row and it was St. Fairy in 1945 that required every bit of Breasley’s skill to bring him to the winning post at a distance well beyond the eight furlongs where the horse did his most productive racing.

During the forties, he also won the Cox Plate in 1944, along with the VRC Derby that same year, which he would repeat in 1952, the year when he returned briefly from riding in England to win his fifth Caulfield Cup. Along with a 1948 win in the AJC Derby, he took the 1949 Sydney Cup on Carbon Copy.

Breasley won the Caulfield Guineas three times, in 1944, 1945 and 1948. He suffered a lapse of judgment in the 1947 edition of the race, however, narrowly missing the victory that would result in trainer J. W. McCurley replacing Breasley with Jack Putrell for the ride on Hiraji in that year’s Melbourne Cup, costing Breasley to miss the winning ride.

The Melbourne Cup was the one race that managed to elude Scobie Breasley, and that was to be the case in sixteen attempts, where the horses beneath him never managed better than second place. In 1933, he was on Shadow King when Hall Mark and J. O’Sullivan filled in the year between Peter Pan’s 1932 and 1934 wins. Thirteen years later, in 1946, he was riding On Target when Darby Munro and Russia took the Cup.

Possibly attempting to prove that he was not just some bush jockey from down under, he took the risk of heading to England to see if his talent was adequate on the main stage. It turns out that it was. The proof lies in over 2000 wins in that sector of the globe, including the English Derby in 1964 and in 1966, when he was beyond the age of fifty. Two major races had fallen to him earlier, those coming in 1958 when he won the King George Cup and the Prix dd l’Arc de Triomphe on Parisian soil. He also during that time won the 2000 Guineas and the 1000 Guineas.

Breasley was premier jockey in his home state of Victoria on three occasions and four in England, when he consistently won over 170 races every season. His stamina was legendary, as he rode many races in one meeting, winning as many as four in one day at Flemington and five at Lewes in England. He did this without causing undue hardship on his mounts, as he was seldom seen to employ the stick. He also could stake the claim that in his entire career, he was never unseated from his horse.

After he retired from riding in 1968, Breasley remained in Europe as a trainer, winning the Irish Derby. He worked for a time in France and New York, and then moved to the Bahamas, where he experienced considerable success.

Breasley returned to Melbourne in 1993 when he was close to 80 years of age. Racing Victoria minted the Scobie Breasely Medal in his honour in 1996. Fittingly, he was one of the inaugural jockeys in 2001 when the Australian Racing Hall of Fame had its first class.

That class included Thomas Hales, Roy Higgins, George Moore and Darby Munro, a true indication of his reputation and the esteem with which he was regarded. The Hall elevated him to legend status in 2009, three years after he died in 2006 at the age of 92.