Anna Meares: Very few of us will ever play in the AFL or the NRL at the top level or have an opportunity to play in one of the Major golf tournaments.

Even though many of us have participated in those two sports, the level of play required in order to engage our interest as spectators is far beyond that possessed by most people.

Competitive cycling attracts broad interest because most people have ridden a bicycle and can appreciate the phenomenal performances of the competitors. A lot of us have had the opportunity to follow in the tracks of the roadies and compare our times against theirs. We can experience the physical sensation of legs burning and lungs gasping, trying to summit a category climb or sprint all-out until all endurance is spent. 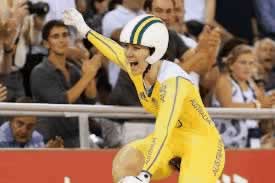 In Australia, track cycling is conducted at over 50 velodromes from Burnie, Tasmania to Perth in Western Australia. This is almost double the number of tracks in the United States, which has almost 30 times as many people.

Sports-obsessed Australia, with perhaps the highest per capita percentage of punters on the planet, has long known that competitive track cycling, with all its various events and conditions, is an ideal sport on which to have a wager know and again.

Against this backdrop, we want to make a brief examination of the cycling prowess of one Anna Maree Meares.

Anna Meares was born 21 September 1983 in Blackwater, Queensland. She got a good early start in the world of competitive cycling, beginning at the age of 11 in 1994. Her sister, Kerrie Meares, Anna’s senior by slightly over a year and a noteworthy track sprinter in her own right, served as a pathfinder, putting up highly respectable results betwixt 1999 and 2008 all over Australia and overseas as well.

Anna Meares and her sister were inspired to take up cycle racing from witnessing the exploits of Kathy Watt, an all-around cyclist with numerous wins in road, track and mountain bike racing.

Even though there are numerous tracks in Australia, growing up in Middlemount meant that the girls had more than two hour’s drive to the nearest track at Mackay.

Cycling is a young person’s game for the most part. The body’s aerobic capacity and ability to absorb oxygen naturally decline with age. This coupled with the inherent difficulty of keeping the rubber side down, means that serious high speed crashes can bring a cyclist’s career to an abrupt conclusion or have a cumulative effect that cannot be overcome.

Anna Meares’s first significant accomplishment was being named Australian Junior Women’s Track Cyclist of the Year in 2001. Her top result would have to have been a first in the 500m Time Trial at the 2001 World Track Championships, a major event on the UCI calendar, where incidentally, Australia ranks fifth all-time for both gold and total medals, ahead of even Germany, The Soviet Union/Russia and the United States.

2002 had nothing so noteworthy; however, Anna Meares acquitted herself honourably in the Commonwealth Games in Manchester, and was perhaps consoled somewhat by her sister taking the gold medal in their specialty, the 500 metre time trial.

The Olympic Games in Athens in 2004 provided her breakthrough moment. Anna won the gold medal, beating the Olympic record time of world record holder Yonghua Jiang of China. She also earned a bronze medal in the 200m sprint.

That year also found Anna Meares taking the title of Women’s World Time Trial Champion and winning a silver in the sprint event. She also took first in the World Cup Time Trial in Sydney.

She began university the following year, 2005, enrolling at Central Queensland University, where she continued to concentrate on her cycling career.

In 2008, at a tune-up for the Beijing Olympics, she was involved in a horrifying crash at the World Cup in January. Just seven months ahead of the Olympic Games, she broke her neck, dislocated one of her shoulders, suffered numerous torn ligaments and tendons, and acquired multiple bruises along with a severe case of wood rash from sliding along a wooden track after dumping her bike whilst going over 60 km/h.

In what can be described as nothing other than an astounding recovery, Anna Meares was back in the saddle within ten days! Based on her earlier results, she was able to qualify for the Beijing Olympics.

Her most noteworthy achievement in China was a controversy-marred sprint where the hometown Chinese competitor was given a do-over of the third heat of Meares’s race with her for no legitimate reason other than it was China’s ball and field. In the rerun, Meares lost, but her competitor was disqualified by reluctant officials for interference, which put Anna into the finals, which she eventually lost to Great Britain’s Victoria Gardner, earning Anna the silver medal.

Worth noting is that in 2008, the IOC, in one of its infamous and confounding rulings, eliminated the 500m Time Trial as an Olympic event, so Anna Meares did not receive the opportunity to defend her 2004 gold medal.

Objectively speaking, in a career remarkable, if for nothing else its longevity, 2012 was to prove to be what could be considered a zenith of sorts, although the final chapter in her almost 20 year career may not yet have been written.

Favoured to win three golds in the 2012 World Championships being held in Melbourne, she took a silver in the team sprint behind a German team that established two new world records in the event.

Anna set a World Record of her own in the 200m flying start, covering 4 laps in 10.782 to erase the previous mark of Lithuania’s Simona Krupeckaite.

Anna Meares also took first in the keirin, beating Russian and German cyclists. She then took another first and set another world record in her favourite event, the 500m Time Trial.

Meares followed her performance in the Worlds with additional Olympic glory in London. She garnered a team bronze in the sprint and took gold medal honours in the individual sprint.

Post cycling, Meares hopes to move into radio commentating combined with coaching up-and-coming cyclists to follow in her path.

Anna Meares certainly seems to have the spirit, and especially the intellect, to do that to which she sets her mind, given the wisdom she displays by listing the Denver Broncos as her favourite sporting team and Garth Brooks as her favourite musical artist.