Not so long ago, professional golfers, whilst certainly gifted athletically in terms of possessing the necessary skills to compete in a sport where only the cream of the elite are granted access to the main stage, were seldom physically gifted with size and strength.

Notable exceptions would be Sam Snead, who is said to have been able to kick the light bulb out of a ceiling fixture, Gary Player, who was capable of doing one push up for every year of his age well into his seventies, and Hale Irwin, who played defensive back in football at the major college level. These were not large men, but their pure athletic ability belies the notion that golfers are not athletes. 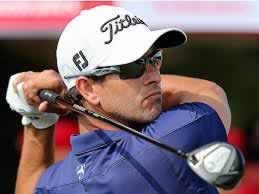 These days, however, golfing skills and extreme physical prowess are practically a given and Australia’s Adam Scott is a primary example of a professional golfer who looks as though he would be capable of playing any sport to which he devoted his effort, whether that was AFL, Rugby League or MLS.

Born Adam Derek Scott on 16 July 1980, in the fair city of Adelaide, he was nine years of age when he and his family relocated to Queensland’s Sunshine Coast.

They next relocated to the Gold Coast. Most of Adam Scott’s education took place here, including a high school stint at the Kooralbyn International School, where he took classes in golf and served as a member of the Golf Australia National Squad. In pursuit of opportunities to maximise his potential as a golfer, he attended the University of Nevada in Las Vegas.

He had an on-again-off-again relationship with a Swedish architect named Marie Kojzar during the first part of the decade of 2000. Adam Scot split with her and was involved briefly with top ranked tennis player Ana Ivanovic that involved a break up and a reconciliation before they called it quits for good in 2012.

Scott was then reunited with Kojzar, whom he married in April of 2014. From a certain perspective, it would seem that his relationship with women was not unlike his relationship with putters. Scott currently is the resident professional at The Palms Golf Course Sanctuary Cove on the Gold Coast, where he maintains a residence that permits him to indulge his passion for riding the big waves as an avid surfer.

Adam Scott was winning at a high level as an amateur, twice consecutively win the Australian Boys’ Amateur crown in 1997 and 1998.

He turned professional in the middle of the 2000 golf season after proving his abilities as an amateur whilst appearing on the European Tour. He earned playing privileges on that tour and also made six starts on the PGA Tour, but he failed to make the cut in all but one of those.

His first professional win came the following year when he won a European Tour event in South Africa, beating out well-established Justin Rose. He had some other respectable finishes that season, as well.

He continued his steady performance in 2002, winning twice more on the European Tour, including a dominant performance that resulted in a six-stroke margin of victory in the Qatar Masters.

He earned an invitation to Augusta to play in The Masters, where he posted a top ten finish and he concluded the season by lapping the field to win the Scottish PGA Championship, winning so comfortably at 26 under par that some waggish golf analysts suggested that he had played only three rounds to the other competitors’ four.

In 2003, Adam Scott won again on the European Tour at the Scandinavian Masters just a month prior to serving notice to the PGA by taking the Deutsche Bank Championship, beating a quality field. He would eclipse that victory the following year by winning the 2004 Players Championship, which some consider as professional golf’s fifth Major.

He was just 23 at the time. That was followed by another PGA Tour win, his third, the Booz Allen Classic, establishing a tournament record of 21 under par.

He continued to make strong showings for the next several years. He had his best showing to date in a Major, placing third in the PGA Championship. The end of the season produced a victory in the Tour Championship and third place on the PGA money list. In 2007 he had ascended to number 3 in the world rankings and won the prestigious Shell Houston Open.

2008 was something of an off-year for Adam Scott. Despite injury and illness, however, he did manage to win the EDS Byron Nelson Championship, winning in a playoff over Ryan Moore. His earnings for that season dropped him down to 39th. 2009 was worse yet, as he dropped out of the top 50 world rankings and all the way down to 108th on the PGA Tour money list.

About the only bright spot in that dismal campaign was a December win in the Australian Open.

2010 was a bit of a resurgence, with a victory in the Valero Texas Open and also won his third Barclays Singapore Open.

He made his best showing in a Major the following year, tying for second with countryman Jason Day in The Masters, where he almost secured the victory but for a breathtaking four consecutive birdie finish from winner Charl Schwartzel.

He made it back into the top 10 of the world rankings in 2011 in a season highlighted by a win in the WGC-Bridgestone Invitational with a comfortable four stroke margin. He shot a final round 65 that served to silence critics who were often eager to point out his failure to close out opportunities on previous occasions.

2012 produced steady play from Adam Scott. He came heartbreakingly close to winning The Open Championship at Royal Lytham & St. Annes Golf Club, where he collapsed down the stretch, surrendering a four shot cushion that he had earned with a birdie on the 14th hole.

The critics re-emerged, drawing comparsions to fellow Australian Greg Norman’s epic collapse in the 1996 Masters. He did notch a victory in that year’s Australian Masters.

Major drama of the Major Tournament type was to envelop Adam Scott in the 2013 edition of The Masters. His birdie on the 18th hole appeared for a moment to give him the victory, but playing in the group behind, Angel Cabrera forced a playoff with an 18th hole birdie of his own.

It took two sudden death holes, during which Cabrera narrowly missed birdies twice, for Scott to become the first Australian to win what many consider to be the world’s premier professional tournament.

The balance of the season was a bit of a let-down, by Adam Scott standards, at any rate. He did win considerably in the land of his birth, including victories in the Australian PGA Championship and the Australian Masters.

2014 saw Scott ascend to the number one position in the World Golf Rankings. He also won the Crowne Plaza Invitational at Colonial, making him the first golfer to win all four of the PGA Tour’s Texas stops. He held the number one ranking until August.

It would seem that Scott, at 34, is entering the prime years for a modern professional golfer. He has shown the mental stamina to overcome adversity and some let-downs and he has not allowed some noteworthy collapses to destroy his confidence.

His physical conditioning is superb and the hopes are that no Great Whites mistake him and his surfboard for a meal. One significant event that may be looming, however, is the 2012 ruling by the USGA and the R&A that prohibits the use of belly putters after 2015.

If his past history of adapting to any and all of the circumstances that affect a professional golfer’s results is any indication, however, it would seem certain that Adam Scott can successfully switch back to the conventional putter.