Every four years since 1930, with the exception of 1942 and 1946, the Fédération Internationale de Football Association has staged the World Cup to determine which country has the best soccer team.

From this point forward, we will refer to the sport’s governing body as FIFA, because in our language, it is really hard to get those little marks above the e’s in Federation. It completely confuses our spell checker and we are sufferers from enough confusion without that mess. 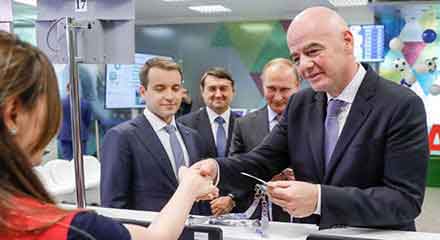 This year’s tournament is being held in Russia, in various locales and will consist of the world’s top 32 teams.

In order to get into the finals, the international matches of the previous three years serve as qualifying rounds and the matches that will be played in Russia are considered the World Cup Finals.

One of the teams that automatically gets into the finals, or tournament phase, is the nation hosting the finals, so Russia is automatically in, despite the country being ranked outside the top 50 in the world, 66th to be precise, according to the official rankings of FIFA.

Australia ranks 40th and as recently as 2017, did not have any guarantee of making it into the tournament, but it is there now.

The women’s side, known as the Female Socceroos up until 1995, now go by the name of the Matildas, but they are no waltzers, oh no! They currently hold the FIFA number six ranking.

From a worldwide perspective, the FIFA World Cup is the most popular sporting event in the world, to a staggering degree. Estimates for the final match of the total number of viewers typically exceed 700 million.

If you live in Australia and want to watch, Optus Sport will televise every match live. SBS will carry 25 matches. In order to watch live, those living down under may have to adopt some strange hours. The other option is to record the matches you want to watch, and then do everything in your power to avoid contact with any spoilers, including family, acquaintances, co-workers, newspapers, radio television and all social media.

In our experience, watching a sports event after the fact is something of a letdown, as you already know that an outcome has been determined, so we would advise the first route, staying up until the wee hours if necessary, or getting up really early, so long as you warn everybody to keep their expectations of you concerning your output at work or the of conduct your personal relationships as low as possible.

The 2018 FIFA World Cup matches will be scattered amongst 11 different Russian cities. Kaliningrad is the most eastern and Yekaterinburg is furthest west. Saint Petersburg marks the northern extreme and Sochi, site of the 2014 Winter Olympics Games is on the southern periphery.

Australia’s base camp for the Socceroos will be in Kazan, which is about as close to Australia as is possible, but you could expect a plane trip there to take close to 24 hours, as there would be two or several stops along the way. You will accumulate some nice frequent flyer rewards, as the distance between Sydney and Kazan is given as 13,779 kilometres. The trip there and back, if you fly out of Sydney, should at the least earn you a free trip from Sydney to Perth, if that should be any sort of attraction for you.

The opening matches for the Socceroos will be in Kazan, where they will face the French team, colloquially known as Les Bleus (the Blues – no connection to the NSW State or Origin side) on June 16. That makes it Sunday evening, 9 p.m. AEDT, which seems entirely reasonable and hopefully, not too far past anyone’s bedtime.

France hosted the tournament in 1998 and they won it that year, as well. They were the runners’ up in 2006 and finished third in 1958 and 1986, with a fourth place result in 1982. Overall, they have five top-four finishes, so the Socceroos will need to have their “A” game when they take the ground at Kazan Arena.

The men’s team first participated in the FIFA World Cup in 1974. They did not make it beyond the Group stage and their best result was a nil-nil draw that left them in 14th position. The men did not qualify to participate again until 2006, where they made it to the round of 16 and won one game. They did not get beyond the Group stage in 2006, 2010 and 2014. Their two wins have come against Japan and Serbia, but the big trophy would have to be the draw with Chile in 1974.

For the Matildas, they will have to wait until 2019 to test themselves in FIFA World Cup play, as the Federation staggers the men and women’s competition. They have made it as far as the quarterfinals, finishing sixth in 2007, eighth in 2011 and seventh in 2015.

The list of winners is a short one, just eight teams have prevailed. It is interesting to note that of those eight teams, Brazil, and Spain in 2010, are the only two to have won having never played hosts.

If you are looking for a punt on the World Cup and nationalistic pride supersedes good sense, Ladbrokes will give you $19 to back Australia, but if your reasons are similar and you are from France, the best you will be able to get is $1.20.

If you care for a smattering of objectivity, the top five to win it all are Brazil and Germany at $5.50, followed by France and Spain at $7 and Argentina at $10.